The cottage of many names

TOURISTS began visiting the Western Tatras much later than the High Tatras. The western part of the mountain range was not so easily accessible – the central part of the Tatras was much easier to reach from the railway station in Poprad. 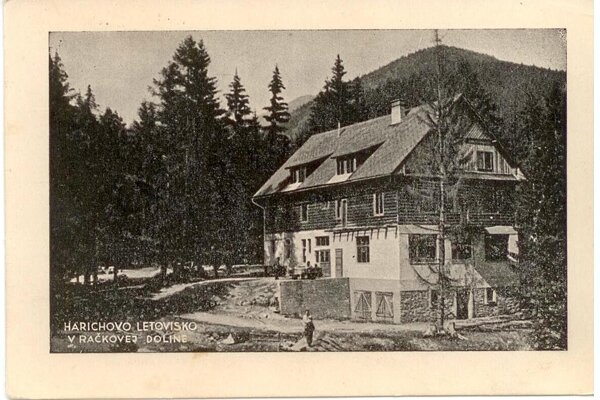 Moreover, in the last 30 years of the 19th century, numerous spa and tourist centres sprouted up in here – such as Smokovce, Tatranská Lomnica and Štrbské pleso.

While guests from the entire monarchy swarmed well-equipped hotels in the High Tatras, forests to the west of them were usually visited only by shepherds or lumberjacks – or an enthusiastic hi-ker. But even if there was one, he had nowhere to stay over-night, as at the turn of the 19th and 20th centuries, there were almost no cottages or mountain chalets there. As late as the 1920s, tourists started to come to this area in greater numbers.

The promising start of tourism was dramatically disrupted during the years of World War II. Conflicts flared in this area when most chalets were used by insurgents fighting against Fascist Germany. Later, the German units gradually occupied all of Slovakia, and thus they burnt almost all of the chalets.

The chalet in this postcard was built by Ján Harich of Pribylina in 1942. The thriving hotel almost miraculously survived the war. Harich’s Resort, or Harichovo Letovisko, was unusually big for the local conditions. As many as 50 people could stay there.

Ján Harich lost his resort in 1949 during nationalisation; however, the building further served the public, but under different names. First it was a convalescent home of trade unions, and then a school and recreation centre of Janko Kráľ, later becoming the Odbojár (Unionist) chalet, Mihuľa chalet – and now called Orešnica. The postcard of Harich’s Resort dates back to 1948.