THE CONSTRUCTION of the Railway Track of Youth, so symbolic for its time, was finalised on October 28, 1949, and two days later, it was ceremonially put into operation. 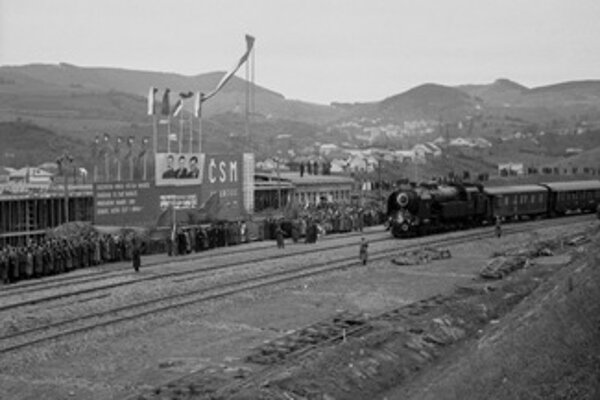 The Railway Track of Youth was opened in October 1949. (Source: TASR)
Font size:A-|A+

THE CONSTRUCTION of the Railway Track of Youth, so symbolic for its time, was finalised on October 28, 1949, and two days later, it was ceremonially put into operation.

The track connecting the towns of Hronská Dúbrava and Banská Štiavnica has existed here even before, used by the Štiavnica mines. On October 6, 1943 – during the war-time Slovak state –the narrow-gauge railway with carriages pulled by the legendary engine called “Anča” began to be re-built and replaced by a new track. The ceremonial opening was even attended by then premier, Vojtech Tuka.

However, the war, the Slovak National Uprising and the ensuing German occupation of the land marred the plans; and they progressed very slowly as well after WWII.

Finally, in 1947, the Central Union of Youth proposed that the track be completed by its young members, and thus the Railway Track of Youth came to exist. Officially, it started to be built on April 5, 1948; and apart from Slovak youths, also about 1,600 volunteers from countries like Bulgaria, Poland and France – as well as Albania, Algeria, the United Kingdom, India, Hungary, Norway, Austria and Ukraine participated. In total, more than 47,000 young people volunteered there.

The track was a typical mountain railway in difficult conditions, 20.3 kilometres long, with an elevation of 266 metres. A tunnel 200 metres long, two bridges, three viaducts, four railway stations, and a total of 49 railway and 32 road structures had to be built.

The folklore troupe Lúčnica was also born thanks to this project; and a documentary by Vladimír Bahna called Steel Road / Oceľová cesta from 1949 hails the idea of the young volunteers’ project. The then-communist regime supported such a project, as they stressed the construction fever, the enthusiasm and the loyalty of young people, and it also served as a tool to influence them.

The town of Banská Štiavnica has been striving to get the Railway Track of Youth inscribed on the Registry of National Cultural Monuments since 2010, the TASR newswire wrote.

By the end of November, Banská Štavnica commemorated the anniversary with a memorial event, a special ride from Banská Štiavnica to Hronská Dúbrava, where all locals and visitors were able to change trains for a historical one dating from 1949, and to return back to Štiavnica in it. On board the train, participants of the original project narrated its history, the conditions and their stories. The cultural programme included the screening of the documentary Steel Road, a concert of Chanson Friends, a historical photo-studio and a commemorative celebration. Finally, visitors lit 1949 candles as a memory to those who built the track but did not live long enough to celebrate its 65th anniversary, the Banská Štiavnica town office informed.

The archive photos illustrate the festive opening of the track, attended by top politicians of the communist era, including infamous Viliam Široký, member of the communist party’s central committee and also deputy chairman of the Czechoslovak government.