Slovaks will get food aid

SLOVAKIA will join the European Union programme designed to distribute free food to the neediest people for the second time in its history. Though there are some negative feelings concerning the programme, which previously ended up in scandal after thousands of people did not receive the aid they were entitled to, the Labour Ministry now claims it has taken steps to prevent the problems. 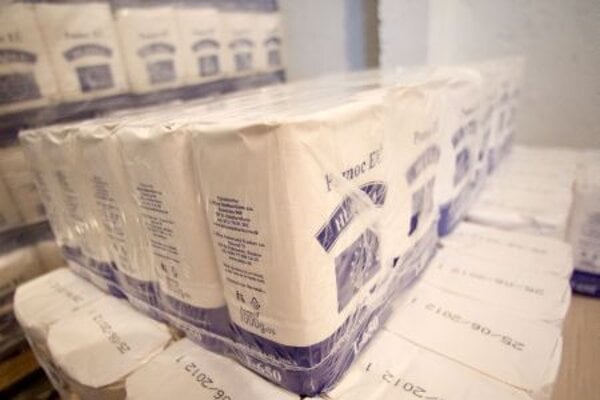 SLOVAKIA will join the European Union programme designed to distribute free food to the neediest people for the second time in its history. Though there are some negative feelings concerning the programme, which previously ended up in scandal after thousands of people did not receive the aid they were entitled to, the Labour Ministry now claims it has taken steps to prevent the problems.

Moreover, the current programme should be more varied and even more targeted, as it will also go to less people than in 2011.

The EC approved the Operation Programme for Food and Basic Material Aid for years 2014-2020, thanks to which it will be able to provide €65 million to help people in need as of the beginning of 2015, in mid-December. Of this amount, €55 million will come from the EU funds, with the government paying the remaining sum.

The aid is projected to go to families with dependent children, pensioners as well as disabled and handicapped people who are in material need and without stable income. The whole distribution will be managed by the Labour Ministry, while the Central Office of Labour, Social Affairs and Family (ÚPSVaR) will coordinate it.

According to the ministry plans, the ÚPSVaR will choose non-governmental organisations which have some experience with working with people in need to help with distribution, Barbora Petrová from the press department of the Labour Ministry told The Slovak Spectator.

Moreover, the NGOs will also offer some other services, such as consultation and counselling regarding how to solve their current situation, Petrová added.

“Our aim is to help people to get out of need and poverty,” Králik said, as quoted by the Pravda daily.

The distribution of free food to the neediest people began as an European Union project in 1986-1987, when surpluses of agricultural products were given to charities in EU member states for distribution to those in need, according to an official release by the EC.

The Iveta Radičová government announced at the end of February 2011 that Slovakia would join the project. It also announced a public tender to process 45,000 tonnes of grain into flour and pasta for distribution to people eligible for state assistance. Each recipient could claim 20 kilograms of flour and 20 kilograms of pasta.

The programme, however, ended up in controversy after intended recipients had not received the 3,500 tons of food. The Nový Čas daily wrote in May 2012 that the Food Bank of Slovakia (PBS), a NGO responsible for the distribution of the aid, had not taken delivery of 3,500 tons of food from the warehouses of Euromills-Trade, a company that was to produce food from grain received from the EU. The main reason for this, according to the daily, was that the PBS, which should have distributed the food directly to the needy, was short of money.

Though the Agriculture Ministry promised to find another delivery agent, the food in question was close to its expiry date and risked having to be thrown away.

The Labour Ministry now claims it has adopted measures to avoid any problems. Petrová explained that this programme is based on different principles than the previous one. Moreover, the operational programme was prepared in cooperation with organisations that actually help people in need.

The ministry also allocated 10 percent of the €65 million for the aid for administration, distribution and storage. The previous programme did not count such expenses, Petrová added.

Moreover, compared to the previous programme, there will be more frequent checks of whether the distribution of the packages is really secured and that it will actually be given to the recipient, Králik said, as quoted by Pravda.

When Slovakia first joined the food aid programme, Robert Fico (then in opposition) called it “an embarrassing nonsense which humiliates the whole country”, as reported by Sme. However, his own government now joins the programme and allocates money for it. Labour Minister Ján Richter explained that unlike the first time, the aid will now be more varied. Moreover, Slovakia will be able to propose the content, volume and form of distribution, the minister said back in September, as cited by the TA3 news channel.

The ministry plans to make the distribution of the aid more targeted and divide it into more phases.

The food packages should be richer than the previous ones when people got only flour and pasta. This time they will contain flour, milk, rice, pasta, sugar, peas, canned goods and oil. The whole package (worth about €24) will be distributed four times a year until 2020, according to the ministry press release.

Moreover, families in material need with dependent children will once a year receive a package of toiletries, including soap, shampoo, toothpaste, toothbrushes and washing powder.

The Labour Ministry predicts it will help about 53,000 families, 11,000 pensioners, 6,000 disabled and 5,000 physically handicapped people. It expects that this number can even increase if anybody appears in a crisis situation, such as being stricken by natural disaster or losing a member of family. Moreover, the selection of people who will get the aid will be based on the actual ÚPSVaR data about people in material need, Petrová said.

The labour offices will subsequently inform people where and when they can obtain their packages.

“Every package will be labelled with a name,” sociologist Zuzana Kusá, who cooperates with the Slovak Anti Poverty Network, told the private broadcaster TV Markíza, adding that this means the aid will be targeted.

Another change compared to the previous aid will be that the ministry will distribute warm food to nearly 10,000 homeless people during winter.

To stop the waste of food, the ministry also plans to support the distribution of the food close to the expiration date from retail chains via NGOs to social and crisis centres, as well as facilities dealing with the protection and care of children, Petrová said.