IVAN Gašparovič, the one-time right-hand man of controversial three-time prime minister Vladimír Mečiar, ended his decade-long tenure and was replaced by Andrej Kiska, the first-ever independent candidate with no previous political background – not to mention the first president who was not once a member of the Communist Party. 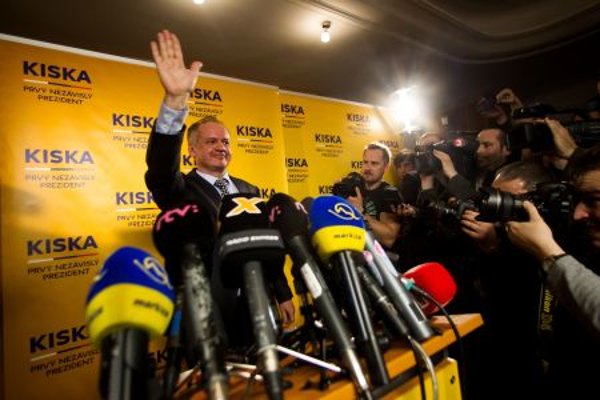 IVAN Gašparovič, the one-time right-hand man of controversial three-time prime minister Vladimír Mečiar, ended his decade-long tenure and was replaced by Andrej Kiska, the first-ever independent candidate with no previous political background – not to mention the first president who was not once a member of the Communist Party.

Kiska, a businessman turned philanthropist, defeated Prime Minister Robert Fico in the second round run-off after he was backed by 1,307,065 people, more votes than Fico’s Smer received in the 2012 parliamentary elections.

On the heels of his unsuccessful presidential run and amid falling approval ratings, Fico changed two of his ministers and a number of state secretaries offering no specific explanation for why Dušan Čaplovič was asked to step down as education minister and why Tomáš Malatinský would no longer serve as economy minister.

One-time Finance Ministry state secretary Peter Pellegrini, a rising star in Smer, took Čaplovič’s job, while Pavol Pavlis, the state secretary at the Economy Ministry, replaced Malatinský. Nevertheless, Pellegrini did not stay long in this post and in November, Fico picked him to become the speaker of parliament after Pavol Paška resigned from the key constitutional post on the heels of a scandal, and alleged corruption, surrounding overpriced medical equipment.

The flawed computer tomography (CT) scanner tender however first ended the career of Zuzana Zvolenská as health minister as well as Renáta Zmajkovičová, a key Smer official, who sat at the top of the supervisory board of the Piešťany hospital which purchased the device, as parliamentary deputy speaker.

The fall of Zvolenská and Paška however did not calm the public anger over dubious deals in the health-care sector while the protests organised by a number of opposition deputies culminated on November 25 when approximately 5,000 people filled the streets of Bratislava.

Meanwhile, state secretary of the Health Ministry Viliam Čislák became the new minister while Juraj Draxler the Education Ministry’s state secretary, who in the past worked for the Brussels-based think tank, the Centre for European Policy Studies (CEPS), and focused on education and science, succeeded Pellegrini.

While for some time in 2014 it seemed that Slovak diplomat Maroš Šefčovič would oversee the transport and space portfolio in the European Commission, satisfying Slovakia’s voiced ambitions to get a strong economic department, he was promoted even further to serve as EC vice president for the Energy Union, far surpassing expectations. Šefčovič now leads strategising that aims at more energy independence from Russia.

2014 indeed featured three elections. Except that of the presidential vote, Slovaks also elected their officials to the European Parliament (EP) setting a new record for low turnout in EP elections, with just 13.05 percent of Slovaks going to the polling stations on May 24.

Nevertheless, in the light of the election results in the UK and France, but also in neighbouring Hungary, the absence of extremist candidates among Slovakia’s new MEPs appeared to be a source of success for Slovak voters. Back in 2009, Slovakia produced a 19.64 percent turnout.

In the November 15 municipal elections, feeding on voters’ frustration with traditional parties, independent candidates led the way taking some 38 percent of the mayoral seats across the country. Bratislava went to an independent candidate, Ivo Nesrovnal, who in a closely watched race defeated the incumbent Smer-backed independent Milan Ftáčnik, and Milan Kňažko, who also ran as an independent backed by a number of opposition parties.

Nevertheless, Prime Minister Robert Fico’s Smer party, as well as the opposition, clamoured to claim success of their own in a vote that 48.34 percent of eligible voters took part.

When looking outside Slovakia’s borders, geopolitical tensions fuelled by the Russian invasion of Ukraine and subsequent tit-for-tat sanctions the European Union and Russia have imposed on one another brought political, economic and security challenges for the country which is heavily energy dependent on Russia.