The year began with the need for the centre-right to consolidate itself, but 2014 saw a continuation of the fragmenting trend instead. 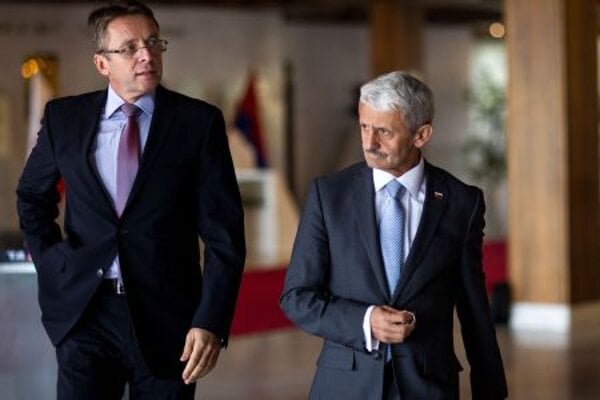 The year began with the need for the centre-right to consolidate itself, but 2014 saw a continuation of the fragmenting trend instead.

The Slovak Democratic and Christian Union (SDKÚ) saw the biggest exodus of members this year. Its latest preferences in the poll carried out by Focus even suggest support of just 2.1 percent, the same level as the Communist Party of Slovakia.

A pair of SDKÚ founding members, two-time prime minister Mikuláš Dzurinda and his right-hand man Ivan Mikloš, quit the party in early June. They cited dissatisfaction with the course the party has taken since 2012, when Pavol Frešo took over from Dzurinda.

Such dissatisfaction appeared widespread as other party members tried to bring Frešo down at the party’s September congress. After they failed to remove him, a group of MPs started to leave, including Martin Fedor, Viliam Novotný, Eugen Jurzyca and Jozef Mikuš. The party currently has only two MPs in the parliament: Frešo and Ľudovít Kaník.

Also the non-parliamentary NOVA of Daniel Lipšic experienced the departure of its members who belonged to its former liberal faction. A group led by Jozef Kollár (previously Freedom and Solidarity (SaS)) left the movement in mid-July, only after a year joining NOVA. The decision came after the June 28 presidium session in Detva, where the presidium members changed the party statutes, abolishing the ideological factions within the party. Kollár and his liberal faction opposed the change, accusing Lipšic of undemocratic and authoritarian practices.

The schism was preceded by the departure from the party of conservative Milan Krajniak, a long-time ally of Lipšic, on June 26, citing differing opinions about the party’s direction.

The year 2014 also saw several new subjects to appear on the political scene, including the Sieť party chaired by Radoslav Procházka which was officially registered on June 12. It merges politicians from both the conservative (Procházka) and the liberal side of the centre-right (mainly Miroslav Beblavý, formerly with the SDKÚ).

Sieť initially proved appealing to voters, with its preferences in the opinion polls standing at more than 10 percent. Its popularity slightly dropped after Igor Matovič of the Ordinary People and Independent Personalities (OĽaNO) accused Procházka of non-transparent practices in financing his presidential campaign. But it still remain high.

Though the analysts and politicians have agreed that there is a need for cooperation and integration among the centre-right parties in order to be a competent competitor to Smer, things appear to have worsened.

After the failure of Pavol Hrušovský of the Christian Democratic Movement (KDH) in the first round of the presidential race, the People’s Platform alliance broke up. The cooperation of the SDKÚ, the KDH and Most-Híd had been questionable since its very start and the doubts increased after the KDH allied with the ruling Smer party to pursue a joint constitutional amendment that includes a conservative definition of marriage drafted by the KDH.

Béla Bugár, chair of Most-Híd, announced his party was leaving the Platform on March 18, noting it had met neither the expectations of voters nor the parties involved. Most-Híd launched its own strategy called Vision 2016. It also announced its rebranding from a party of cooperation to a civic party in mid-April. This change came along with announcement that SDKÚ renegade and former justice minister Lucia Žitňanská was joining the party.