Discussions about defining a family and LGBTI rights were the predominant human rights issues in 2014. 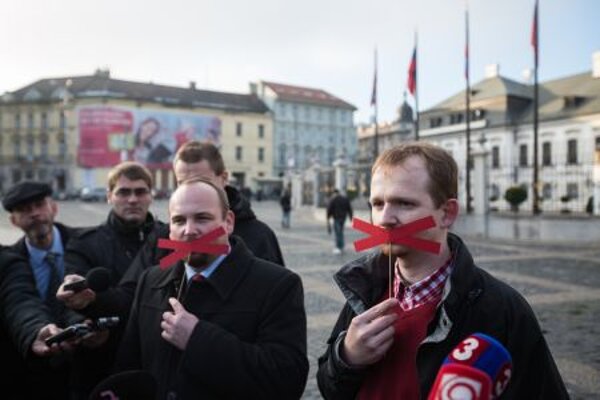 President Kiska has set February 7, 2015 as the date for the referendum on the “protection of family”, after the Constitutional Court (CC) approved three out of four referendum questions in October.

The referendum, which should cost more than €6.3 million to run, will seek people’s answers to three questions. These concern the use of the word “marriage” only when referring to the union of a man and a woman, a question on preventing same-sex couples from adopting children, and whether or not parents should be allowed to decide if their children should attend classes dealing with sex education and euthanasia.

The CC ruled that it was unconstitutional to ask voters whether they agree that no other cohabitation of persons other than marriage should be granted particular protection, rights and duties that law presently grants to marriages and to spouses. These rights include mainly the acknowledgement, registration or recording in front of a public authority and the possibility to adopt a child by the spouse of a biological parent.

The referendum on three questions will place despite a revision to the country’s constitution sailed through parliament on June 4, which already defines marriage as a “unique bond between a man and a woman”. Chairwoman of Amnesty International Slovensko Jela Dobošová then complained that the agreement over the deputy proposal of what she called a “constitutional ban of same sex marriages” happened behind closed doors without any debate.

The Alliance for Family (AZR) which initiated referendum however suggested that even if amendment is a form of progress, “it won’t protect family and marriage in Slovakia from EU rage and court activism”, the TASR newswire reported, quoting a statement.

Meanwhile the state-wide Strategy for the Protection and Support of Human Rights was approved by the Government Council for Human Rights, Ethnic Minorities and Gender Equality on December 1, with the document slated to be discussed by the government. It is now Fico’s turn to set date of its discussion.

It took three years to draft the strategy and no one was excluded from the discussion about it, according to Foreign and European Affairs Minister Miroslav Lajčák who is serving as the coordinator for the drafting process and also chairs the government’s human rights council. However, conservative MPs and NGOs criticised document saying that it too much favours LGBTI community and could harm traditional values.

At the end of the year CC also decided that laws concerning the mandatory vaccination of children do not contradict the constitution and parents can be fined for avoiding them, TASR wrote on December 10.

The Nitra Regional Court turned to the CC on June 17, 2013 due to a lawsuit by a complainant asking it to scrutinise the lawfulness of the ruling and the steps of the Slovak Public Health Authority. She refused to let her child be vaccinated against diphtheria, tetanus, whooping cough, polio, viral hepatitis B and pneumococcal infection. The regional public health office therefore decided to fine her €100 and she appealed the decision, according to the SITA newswire.