WHILE a private train company already operates in Slovakia, passengers had to wait until mid-December for real competition on Slovak rails. Czech private railway carrier RegioJet, already running trains on the regional route between Bratislava and Komárno, has launched rail transport on the busiest route in Slovakia – between Bratislava and Košice, just before the Christmas season, which is traditionally the busiest part of the year in transport. The competition has already brought lower prices and more services. 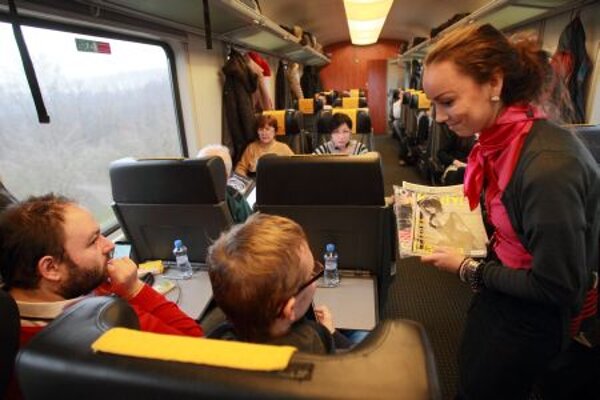 WHILE a private train company already operates in Slovakia, passengers had to wait until mid-December for real competition on Slovak rails. Czech private railway carrier RegioJet, already running trains on the regional route between Bratislava and Komárno, has launched rail transport on the busiest route in Slovakia – between Bratislava and Košice, just before the Christmas season, which is traditionally the busiest part of the year in transport. The competition has already brought lower prices and more services.

“Sunday [December 14] was historical for Slovak rails because the unsubsidised liberalisation in rail passenger transport was launched,” Pavel Kravec, the former director general of the state-run carrier Železničná Spoločnosť Slovensko (ZSSK), told the Hospodárske Noviny daily. “The real competition for clients has begun.”

According to Kravec, the state company now has real competition in RegioJet, which led its strategy to the tone of a changing approach to passengers, quality of services and a low price.
Within the regular annual change of the rail timetable, two private Czech rail carriers launched operations on long-distance routes in Slovakia as of December 14.

Simultaneously ZSSK added new express as well as regional train lines, citing increased interest in passenger railway transport boosted by the extension of groups of citizens eligible for free rail transport, as well as efforts to continue to build a so-called clock-face schedule in Slovakia. But while the Czech carriers provide the transport without support from the state, new trains launched by ZSSK are state subsidised. ZSSK already operates unsubsidised trains on the Bratislava-Košice route.

On the morning of December 14, the first RegioJet IC train on the route Košice – Žilina – Bratislava was dispatched from Bratislava. Its dispatch was accompanied by small problems as carriages were not correctly marked, some carriages had problems with heating and passengers had problems with WiFi connection and thus were not able to fully enjoy offers on the internal network in the train. Problems also occurred during following days such as on December 17, RegioJet had to cancel one train from Bratislava to Košice due to a software failure on the engine and another train was 90 minutes late.

On the same day ZSSK dispatched six IC trains, two from Bratislava to Košice, three from Košice to Bratislava and one from Humenné via Prešov to Bratislava, the SITA newswire wrote.

Competition on the Bratislava-Košice route has brought more services and lower prices, as RegioJet offers the lowest price of €9. Prices of ZSSK on this route start at €9.9 while it launched a new price scheme benefiting loyal passengers and those who buy tickets earlier.

Desana Mertinková, railway transport expert and the editor-in-chief of Železničná Doprava magazine, assessing the entry of RegioJet into unsubsidised long-distance rail transport, stated that the competition for clients began under quite distorted conditions, especially due to free rail transport as well as other novelties introduced along with the change of the timetable. She pointed out for Hospodárske Noviny that the number of subsidised trains on routes between Košice and Bratislava and Bratislava and Žilina increased while a new express train was added from Trenčín to Košice too.

Mertinková expects that the arrival of the new carrier would bring passengers of the state rail company a change in the approach to clients and an increase in quality of travelling. But she thinks that the state company could start providing these earlier than under the pressure of competition of new carriers, recalling that newspapers and magazines were free in Slovak InterCity (IC) trains already in the 1990s, but later this habit was abandoned.

She praised the increase in the number of classes of carriages even though this trend has been visible already for several years in Europe. For example, passengers who choose the class 1 plus will be able to use a new parking service at the station as well.

In respect to the price war, Mertinková said that offering lower prices is a typical strategy of newcomers when entering a market.

“Existing providers of services mostly adapt,” Mertinková said, adding that however in the Czech Republic this price war is ongoing for three years already.

Mertinková thinks that RegioJet is determined to run the trains with losses as long as it would be necessary as it can cover loses from profits of other activities within the Student Agency holding of which RegioJet is a part. On the other hand, she does not see any danger on the side of the state carrier as it has been making a loss for several years already and the state has always helped it. But she also points out that it is being shown that the most lucrative route in the Czech Republic between Prague and Ostrava is not able to sustain several carriers only on the basis of revenues from travelling. Especially when subsidised trains also run on this route and the rivals compete with low prices. In her opinion this is true also for the Bratislava-Košice route.

“More or less all examples from abroad, where commercial carriers started to operate without subsidies of the state, are showing that even after several years they are not able to get away from red figures,” said Mertinková.

Apart from RegioJet, another Czech private railway carrier, Leo Express, began to operate in Slovakia. Leo Express started to run a route between Prague and Košice via Žilina. The price of the ticket starts at €12.65 and the travel lasts eight hours and 26 minutes. This is the same route as that of Pendolino operated by the Czech carrier České Dráhy and ZSSK. However, the latter lasts seven hours and 29 minutes while its price starts at €14.52, according to Hospodárske Noviny. RegioJet also operates this route.

Who is the winner?

RegioJet reported that it transported a total of 2,290 passengers on three trains from Bratislava to Košice and three trains from Košice to Bratislava on December 14, but it did not say how full the trains were. On the other hand, ZSSK reported that its IC trains on this route were half full, but did not provide the number of passengers transported. Hospodárske Noviny estimated the occupancy of RegioJet’s trains at 76 percent on average. Both carriers expressed satisfaction with the results.

“Afternoon trains from eastern Slovakia to Bratislava were the fullest,” Jana Morháčová, spokesperson of ZSSK, said, as cited by SITA, adding that some IC trains of ZSSK have a higher capacity of seats than those of the private carrier.

ZSSK also pointed out that all ZSSK trains arrived in time while those of the private carrier were delayed by eight to 48 minutes.

Experts did not want to assess the new situation in rail transport after the first day of operation.

“Both companies are winners,” Kravec told Hospodárske Noviny. “For RegioJet the victory is the launch of the operation on the most important route of Slovakia and the victory for ZSSK is that it managed to cope with changes.”