AFTER last year’s success, this year also the High Tatras will have a special attraction apart from natural beauties: a man-made ice cathedral of artificial ice. 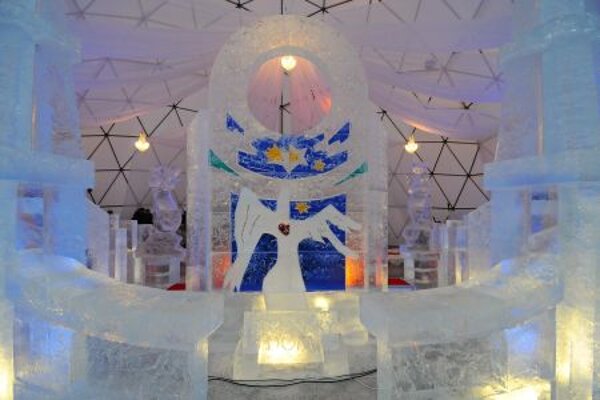 AFTER last year’s success, this year also the High Tatras will have a special attraction apart from natural beauties: a man-made ice cathedral of artificial ice.

The Czech sculptor from Pilsen, František Bálek, has again created an entire construction of ice – this time round and imported from Belgium, the vysoketatry.sk website informed – that was opened on December 18 and should last until March (or as long as weather permits). The construction at the Hrebienok resort is open daily, from morning until late evening, and will also offer coloured stained glass made by Slovak artist Viktor Frešo. They needed 47.5 tonnes of ice and two weeks of work, eight to 10 hours per day to give it the final artistic form.

More updated information on the ice cathedral can be found at regiontatry.sk (also in English), the website of the organising regional institution. Entry is free.

Bálek was assisted by seven more sculptors and three helpers in building the ice structure. During the last winter season, a similar work by Báleš was the biggest attraction of the High Tatras, Lenka Maťašovksá, the spokesperson of the Vyoské Tatry Region tourist association told the TASR newswire. This year, they also hope that the ice cathedral, or “ľadový dóm” in Slovak, will be able to attract record numbers of tourists. There are also concerts and cultural events planned to take place inside the ice structure.

A novelty compared to last year can be considered the stained glass windows, different statues and also a different compositional division of the cathedral, Maťašovská said.

The ideal temperature for sculpting is minus 5°C to minus 7°C, but a temperature around zero is still sufficient, although, naturally, it can complicate the work. In 2014, the weather seems more favourable than last season.

The ice cathedral was completed and festively opened on December 18