IT HAS become a pleasant tradition to send a festively-decorated Christmas tram onto the streets of Bratislava. On St Nicolaus’ day, December 6, a special tram was also dispatched with a “ticket collector” dressed as this historical person turned symbol - both in Bratislava and Košice. 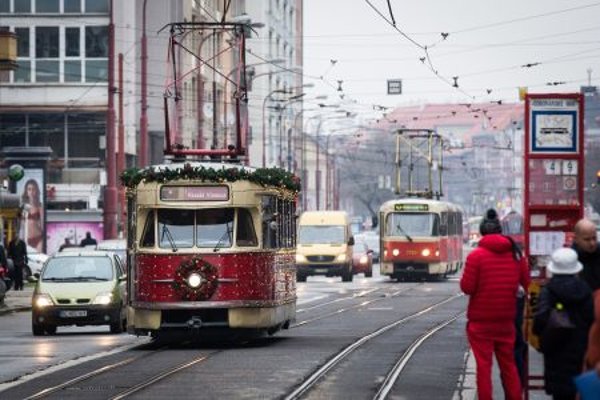 IT HAS become a pleasant tradition to send a festively-decorated Christmas tram onto the streets of Bratislava. On St Nicolaus’ day, December 6, a special tram was also dispatched with a “ticket collector” dressed as this historical person turned symbol - both in Bratislava and Košice.

In Košice, such a tram could have been ridden between 14:00 and 19:00 on December 6, between the Staničné námestie close to the railway station and the Amphitheatre. Another one was stationed on the Main Street – Hlavná ulica. It included St Nicolaus and his helpers, as well as a devil and an angel, the TASR newswire wrote.

Children were able to enjoy a programme, get some sweets, take a picture with the mythological personages, and try making gingerbread.

In the capital, such a tram operated on December 5, focusing on children. However, over the next weeks – until December 23 – the festively decorated Christmas tram will transport locals and visitors alike daily, between 16:00 and 20:00.

Starting from Jesenského Street (where visitors of the Christmas market can prolong their festive mood and take this special tram), it travels via SNP Square, Poštová, Vyoská, Blumentál, Vazovova, Americké Square and Mariánska – them turning to the SNP Square, Kapucínska Street, Chatam Sófer, SNP Bridge and back to Jesenského, to the historical building of the Slovak National Theatre. The entire route takes about 40 minutes.

The ticket collector wearing a period uniform, Alžbeta Marmulová of the Bratislava City Transport company, told TASR that she has been accompanying people on the historical, decorative tram for several years and that she is always looking forward to it, envisaging the happy passengers, cheered by the carols played, the decoration or simply the ride itself. “In the past years, we were full until the very last day; and I firmly believe that this year will not be different,” Marmulová said.

These types of trams used to be produced by the Tatra Smíchov (in the Czech part of the then Czechoslovakia) company and ČKD Stalingrad - and called ČKD-Tatra T2 – between the beginning of the 1950s and 1960s, while they operated in Bratislava between 1958 and 1988. This particular one was later renovated and currently operates on special rides, such as the Christmas one, the SITA newswire wrote. In the tram, there is a donation box where people can contribute towards renovations of more historical trams to be operated on the Bratislava streets.