CONSISTENTLY high unemployment is one of the biggest, if not the biggest, economic problems in Slovakia, where despite periods of economic growth over the last decade the jobless rate has remained at double-digit levels. 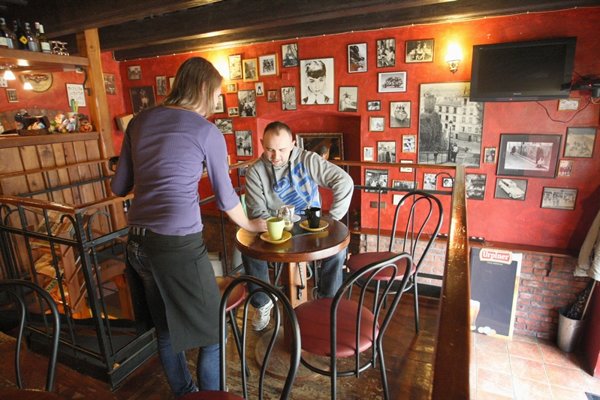 New jobs could be generated by the service sector.
Font size:A-|A+  Comments disabled

CONSISTENTLY high unemployment is one of the biggest, if not the biggest, economic problems in Slovakia, where despite periods of economic growth over the last decade the jobless rate has remained at double-digit levels.

Economists point to the structure of Slovakia’s economy as an explanation behind the continuingly high jobless rate, but they also see some positive signals where lower economic growth than in the past is capable of creating jobs. Another problem is the high jobless rate of the Roma minority, many of which because of low education and discrimination on the labour market have little chance to get a job.

The gross domestic product (GDP) of Slovakia grew by 50 percent in real terms between 2003 and 2013. This is the biggest growth within the European Union (EU) when the EU’s average was about 11 percent, according to Eurostat and calculations of VÚB bank. But in terms of the unemployment the performance of Slovakia is much weaker when Slovakia had the sixth highest jobless rate, about 14 percent, in the EU at the end of the third quarter of 2014, when only Greece, Spain, Cyprus and Portugal reported higher rates.

Why is unemployment so high?

Economists see several reasons behind the consistently high unemployment. These include the structure of Slovakia’s economy, labour optimisation, high payroll taxes and the low level of education and discrimination excluding the Roma population from the labour market.

Andrej Arady, macro economist with VÚB, specified that the structure of Slovakia’s economy is dominated by industry. The economic growth between 2003 and 2013 was driven by sectors with a high growth of labour productivity and thus there was no need to create new working positions. Industrial production made up 39 percent of the economic growth between 2003 and 2013, but the number of working places fell by 9 percent.

The Financial Policy Institute (IFP), a think tank of the Finance Ministry, agrees that the structure of economy is one of reasons behind the Slovakia’s high jobless rate, while it has been hindering creation of new working positions since the start of transformation from a planned to market economy.

Economic changes in 1989 impacted the labour market of Slovakia much more than that of the Czech Republic. During first two years since the transformation the jobless rate in Slovakia reached double digits, while in the Czech Republic it did not exceed 5 percent. During the previous regime there was actually no unemployment.

“This fact indicates that the structure of economy from before 1989 played a significant role during creation of working positions after 1989,” the IFP’s analysis reads. “Moreover, while the later integration into the global economy brought Slovakia a fast growth of productivity via the access to new markets, technologies and know-how, global competition dampened the growth of employment. Thus the transformation of the labour market was slower and is still not completed.”

Zdenko Štefanides, chief analyst with VÚB, agrees adding that Slovakia was historically an agrarian country with heavy industry while the share of industry of Slovakia’s economy is still one of the biggest in Europe.

Impacts of the global economic and financial crisis on Slovakia’s labour market were also more painful than elsewhere in Europe.

Correlation between growth and jobs

Based on calculations by VÚB analysts, Slovakia’s economy needed to grow by at least 2.4 percent on average over the last 10 years to generate new jobs.

“This is a relatively high level,” Arady said. “Even though we grew quickly, we needed a relatively fast growth to generate as many jobs as we expected.”

Compared with Slovakia, Poland needed the economic growth of only 2.2 percent and the Czech Republic just 0.7 percent to generate working places.

Arady sees the high portion of the industry making up the Slovakia’s economy behind this development.

“Let’s take a typical automotive industry,” Arady said. “They brought in new technologies and were able to produce much more with many fewer workers.”

Another reason of the high jobless rate is that Slovakia’s local labour market underwent a significant optimisation demonstrated by the fact that while the GDP has already exceeded that of 2008 by 5.1 percent the number of work positions has not reached the 2008 level yet. VÚB analysts estimate that compared with the pre-crisis period of 2008 there were as of the second quarter of 2014 by approximately 50,000 fewer working positions.

“Thus we produce a bigger volume of added value, but with a lesser number of workers and the reason is the optimisation of the labour market,” said Arady.

In respect to the persisting high jobless rate it looks like that Slovakia has not moved anywhere as the jobless rate remains to be about 14 percent on average over the last 20 years, according to Štefanides.

”But something has been changing here and it is that working positions are being generated this year and that they are generated quite quickly, either we compare quarter to quarter or year on year,” Štefanides said, adding that the number of working positions during the third quarter of 2014 was by 1.4 percent higher compared y/y.

The jobless rate decreased too, down from the peak at the beginning of 2013 by more than 2.5 percentage points.

“Thus there is happening something positive and this is the fact that while the economy did not create too many work positions so far, even though we grew quickly, now, even though we are not growing so quickly, work positions are being created,” Štefanides said. “This is a bit peculiar phenomenon, but the fact is that it occurs not only in Slovakia but also globally.”

Štefanides sees two reasons behind this development in the world and more or less also in Slovakia: (1) a smaller work force and (2) using up the room for increase in production through new technologies alone.

According to him, the jobless rate is decreasing even when any high number of new jobs is being created because a lot of people are after five years of searching for job tired and they have decided to retire or withdraw from the labour market.

“As a consequence the volume of people, who can work, is lower,” Štefanides said, adding in respect to the second reason that companies already have installed new technologies and thus when they want to increase production, they need to recruit new employees.

Arady further pointed out that while the general situation on the labour market is improving, there is a trap of the long-term unemployment.

“When people find themselves outside the labour market, they use to stay there for a very long time and when being unemployed for a longer period of time, it is very difficult for them to find a job,” said Arady, adding that this means that while the total number of the unemployed is decreasing, the number of those, who are outside the labour market for more than one year is increasing.

The IFP points out that almost 70 percent of the unemployed are outside the labour market for more than one year.

The IFP sees the low level of education and discrimination excluding the Roma population from the labour market as another reason for the high jobless rate in Slovakia. While the share of the majority society with job is about 60 percent, in case of the Roma it is only between 15 and 17 percent.

“One of the reasons of exclusion of the Roma from the labour market is missing skills and low levels of education,” the IFP writes in its analysis. “But also the extensive discrimination on the labour prevents the higher employment.”

According to the IFP, if the Roma population achieves average results of the majority population on the labour market, the general unemployment rate would decrease to 11 percent.

“Even though that this is still far from acceptable levels, without integration of the Roma into the work process the general unemployment rate will not decrease in a more significant scale in the future,” the IFP’s analysis reads.

Economists expect that the Slovakia’s economy, even when its growth would not be so robust in 2015, would continue to create jobs, but at a bit slower pace than in 2014. According to VÚB analysts, the development of the Slovakia’s labour market also reflected impacts of the adoption of a revision to the Labour Code as of 2013. Employers, who were excessively pessimistic while their concerns were fuelled by changes in taxes and levies in 2013, preventively laid off a portion of their workers in order to avoid higher costs related to layoffs before the revised Labour Code became effective.

“In the end it was shown that the development was not as bad as originally expected and thus they are taking people back,” said Arady, adding that this is one of reasons why work positions were created in 2014 and that this space has been used up and thus the grow of the employment or decline of the unemployment would be not so robust in 2015.

In respect to the structure of economy, which in Slovakia is dominated by industry, it is the sector of services which is able to create new working positions, according to Štefanides. He believes that when Slovakia’s economy would be more driven by domestic demand than exports there will be more jobs created in the service sector.

“But this is a problem [of structure of economy] which will remain here for years,” Štefanides said, recalling that after 25 years since the fall of the Berlin wall and reunification of Germany, there are still deep differences between western and eastern part of the country in terms of unemployment and the structure of economy. “Simply 40 years of communism cannot be easily erased during one generation.”