SLOVAKIA has failed to adopt the Bologna system, at least according to the university education experts, who cite an unnatural push of undergraduates into advanced study rather than the labour market. 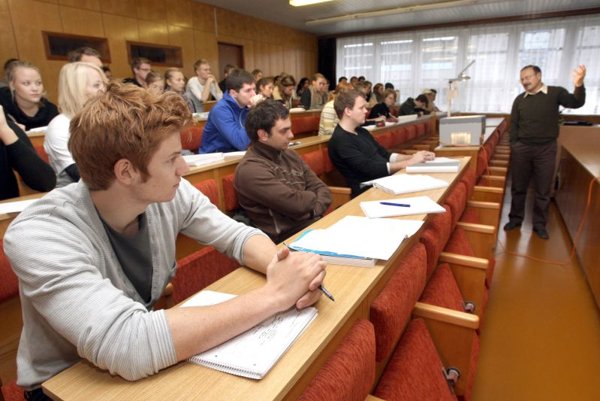 A student can be expelled from university for submitting a thesis, which was not written by them, in the end. (Source: Sme)
Font size:A-|A+0

SLOVAKIA has failed to adopt the Bologna system, at least according to the university education experts, who cite an unnatural push of undergraduates into advanced study rather than the labour market.

The goal of the Bologna Process was to create a European Higher Education Area (EHEA) by 2010. It was meant to strengthen the competitiveness and attractiveness of the higher education and to foster student mobility and employability through the introduction of a system based on undergraduate and postgraduate studies with easily readable programmes and degrees, according to the official EHEA website.

Together 47 countries have joined the scheme. Slovakia implemented most of the formal elements of the system in 2002, said Education Ministry spokeswoman Beata Dupaľová Ksenzsighová. However, Ivan Ostrovský from the Academic Ranking and Rating Agency (ARRA) says that Slovakia has failed to fully reform.

“We have only formally adopted the three-degree system of education, but in fact we literally coax more than 80 percent of the cohort from the first to the second degree,” Ostrovský said.

“We need to change the curriculum in cooperation with employers in order to produce bachelors for the labour market, and choose the best of them for the second degree,” Ostrovský said.

The responsibility for the current state lies not only in universities, but also in all governments and in employers who hire the graduates. The universities failed to establish the bachelor programmes whose graduates would have sufficient education and be attractive for the practice, said Viktor Smieško, chairman of Council of Universities, the government based advisory body.

The Education Ministry says it wants to support the profession-oriented bachelor programmes. Some faculties even consult companies and seek to harness EU structural funds, Dupaľová Ksenzsighová told The Slovak Spectator.

According to Smieško, Slovakia failed to secure not only the selection of students of the individual university degrees, but also the number of study programmes. This means that the undergraduate degrees should have fewer studying programmes than the graduate degrees, he said.

“Both factors impact the wasting of finances for university education,” Smieško told The Slovak Spectator.

Moreover, Slovakia still insufficiently funds both schools and science. The Visegrad Group (V4) countries allocate about 25-30 percent more funds for this area than Slovakia, while in the EU the funds are nearly twice as high, Smieško said.

He also criticised the practice when the schools receive the money only based on the number of students. This causes that the schools take also students who do not meet the criteria for studies.

When distributing the finances, the state does not take into consideration whether the content of educational programmes corresponds with the needs of the economy and the labour market, Martin Hošták, secretary of the National Union of Employers (RÚZ), told The Slovak Spectator.

Smieško suggests that the financing should take into consideration the internationally accepted results of schools rather than the number of students. The state should mark its elite universities and adjust the financing to this, he said.

“There are dozens of studies [suggesting] that the developed countries significantly support their top universities,” Smieško added.

The Education Ministry will discuss changes to financing the universities, but because the election year 2016 is approaching, it will be only able to prepare a proposal that could be implemented by future government, Dupaľová Ksenzsighová said.

Another way to solve problems is to remove the information disparity about the universities. It is necessary to publish all relevant information about the school on its website, as it is common in other developed countries, Smieško said.

Ostrovský welcomed the plan and said that it should be also in the interest of schools to publish the information about them.

“If the school does not admit, provide or refuses [to publish the information] it will expose its own image to the public,” Ostrovský told SRo. He added that it is then up to students whether they decide to get the diploma of the unknown quality.

Another problem of the current system is that the schools’ curricula do not correspond with the needs of the labour market and that the students study humanities rather than technical subjects, said Hošták.

“There are about 10,000 free positions which are empty because the employers cannot find adequate workers with adequate education and qualification,” Hošták said.

Every year there are thousands of graduates of the political science, social work, mass media-communication, caretaking, economy or law, Smieško added.

According to Ostrovský, the schools know that the number of potential applicants for the studies is decreasing as a result of the decreasing demographic trends. Therefore they lure the students, often with offering them specialisations which are easy to pass. They do not care whether their graduates find a job or not, he added.

Job placement should be an important factor in rating schools, according to Hošták.

“It is not possible that there are schools or faculties most of whose graduates are unemployed,” he said.

The problem is that Slovakia has many faculties of low quality, Ostrovský said. The Education Ministry has however only limited possibilities to change this as the universities are autonomous and make their own decisions regarding the studies. Though the Accreditation Committee could do something in this field, the problem is that it is wrongly defined and wrongly focused, according to Ostrovský.

“The Accreditation Committee currently does not feel to be entitled to interfere into the structure and number of educational programmes,” Ostrovský said.

Though the Accreditation Committee does not distinguish the schools’ and faculties’ quality, Ostrovský said that the recent ARRA study showed the students orient more on the quality faculties as they realise it is important what kind of diploma they get in the end.