The Slovak U20 ice hockey national team which travelled to the world championship in Canada with the goal of keeping itself in the top-flight category has brought home the bronze following a 4-2 victory over Sweden on January 5. 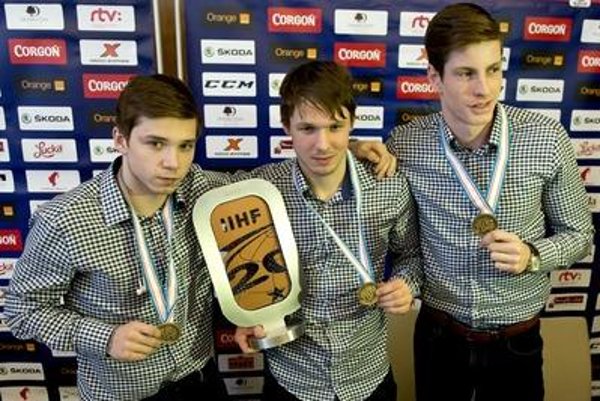 The current team coached by Ernest Bokroš has imitated the feat of the Slovak U20 from 16 years ago in Winnipeg, at that time coached by Ján Filc. Three years after the bronze with U20s, Filc coached through the senior national team to the gold at the Worlds in Sweden, the TASR newswire wrote.

“These are splendid moments,” Bokroš said for the official website of the Slovak Ice Hockey Association (SZĽH). “Considering the minuscule player basis in Slovakia, we’ve achieved a huge feat.”

Despite low expectations by fans at home and the 0-8 debacle received from Canada in the first game, the Slovak team around captain Martin Reway and tournament’s MVP, goalie Denis Godla, from the second game on began menacing opponents. The first victims were the title defenders from Finland, who were defeated 2-1 by the Slovaks.

Godla became the hero of the tournament, being hailed since semi-finals by standing ovations and also chanting his name by Canadian fans. Godla admitted for the SITA newswire that it is a unique feeling to be celebrated in such a way in a hall like the Air Canada Centre, and thanked all Canadians.

Slovak team also praised the support of their Slovak fans, growing with every match and shown mainly through short messages and increased TV viewing. “This is an unbelievable feeling – to know that so many people stand behind you,” forward Samuel Petráš told SITA.

Having reached the semi-finals after thrashing 3-0 their Czech rivals in the quarterfinals, Slovakia again lost 1-5 to the tournament’s top favourite from the host country. Nevertheless, the young Slovaks managed to recover from the defeat, and the following day they beat the Swedes in the bronze medal game, TASR wrote.

(Source: TASR, SITA)
Compiled by Zuzana Vilikovská from press reports
The Slovak Spectator cannot vouch for the accuracy of the information presented in its Flash News postings.