Fiscal results are better than planned

SLOVAKIA managed its fiscal affairs in 2014 better than planned when it closed the year below the plan, with a cash deposit of 0.5 percent of gross domestic product. Finance Minister Peter Kažimír ascribes this to better collection of taxes and sound growth of Slovakia’s economy. The exact deficit will not be known until in the spring. The cash deficit for 2014 was projected at €3.3 billion, while it amounted to €2.9 billion at midnight on December 31, 2014. 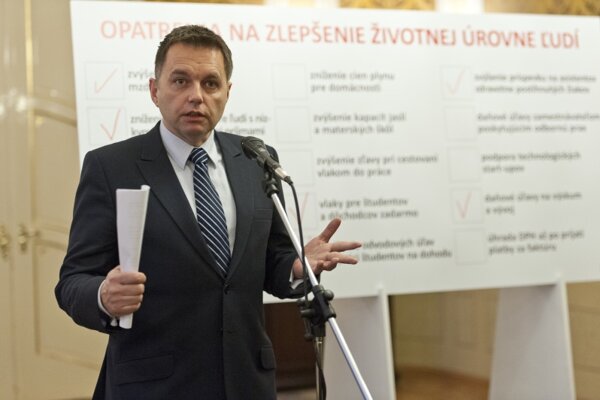 SLOVAKIA managed its fiscal affairs in 2014 better than planned when it closed the year below the plan, with a cash deposit of 0.5 percent of gross domestic product. Finance Minister Peter Kažimír ascribes this to better collection of taxes and sound growth of Slovakia’s economy. The exact deficit will not be known until in the spring. The cash deficit for 2014 was projected at €3.3 billion, while it amounted to €2.9 billion at midnight on December 31, 2014.

“This means that we, the government and the state, didn’t use the entire scope that was provided,” Kažimír said on January 2 when announcing the results of financial management of the state. “The cash deficit is 0.5 percent of the gross domestic product lower than planned in the state budget.”

The cash deficit also has an impact on the debt of public finances. Kažimír estimates that the debt fell on a yearly basis between 2013 and 2014 by around 1 percent of gross domestic product (GDP).

“We’re safely below the level of 55 percent of GDP, and we’re among the eurozone and EU countries with the lowest public debt,” Kažimír said, as cited by the TASR newswire. “Thanks to a one-off temporary fiscal expansion that we used in 2014 we managed to revive the domestic economy for the first time since the crisis emerged in 2009, with significant contributions provided by a revival in domestic consumption and private investments. This helped us to cope successfully with the turbulence that came from the external environment.”

In respect to the deficit being lower than planned, prognosticator Vladimír Baláž told the Hospodárske Noviny economic daily that each wise finance minister plans a higher deficit in order for there to be a margin in case he potentially needs it.

Katarína Muchová, analyst with Slovenská Sporiteľňa, pointed out that while the cash deficit is lower, it is the accrual deficit which is important.

“We expect that the deficit for 2014 will be about 2.93 percent of GDP which is moderately above the original estimate of 2.6 percent of GDP,” Muchová told the Slovak Television.

It is too early to speak about the deficit of public finances.

“We have to wait the next two months for results of those parts of the public sector which we do not have directly under control,” said Kažimír, adding that these are especially results of the financial management of self-administrations and health insurance companies.

Analysts and economists see large risks especially here. The Finance Ministry itself counts in the state budget for 2014 with an additional debt of hospitals of €177 million, the Pravda daily wrote. Moreover, any measures to improve the situation in a more significant scope have not yet been adopted and the independent Board of Budgetary Responsibility has indicated that health-care expenditures are also underrated in the budget for 2015 by €50 million.

Companies in Slovakia sent the state significantly more taxes than originally planned when they exceeded original expectations with the largest amount in the last nine years, Hospodárske Noviny wrote. The plans were exceeded by 34 percent when companies sent to the state treasury €1.9 billion instead of the predicted €1.4 billion. In spite of this increase, corporate tax collection lagged 4.3 percent behind 2013’s figure.

The Finance Ministry attributes the better than planned collection of company taxes, measures to combat tax evasion and avoidance. While experts in taxes admit some influence of these measures, Alica Orda Oravcová, tax advisor at GT&C Slovakia, pointed out also the increase in corporate tax from 19 to 23 percent. Companies were obliged to pay such a corporate tax rate for 2013 when later this rate was decreased to the current 22 percent.

“This was a relatively high jump,” Orda Oravcová told Hospodárske Noviny referring to the 4-percentage point increase in the corporate tax rate. Companies paid advance taxes from the 23-percent rate in 2014.

But while the state budget already counted on this in its scenario, the performance of the Slovak economy reflecting in higher profits of companies was a positive surprise. The economic growth of Slovakia in 2014 is estimated at 2.4 percent as the conflict between Russia and Europe did not impact Slovakia in any significant way in 2014, according to Baláž. Thus companies achieved sound results last year.

According to Rastislav Machunka, the executive president of the Federation of Employers’ Associations (AZZZ), especially large and key-importance companies like U.S. Steel in Košice and car makers contributed to 2014’s results.

But definitive incomes from the corporate tax will be clear only after companies submit their tax returns and it will be known whether they will have to pay additional taxes or, on the contrary, the state will have to return some already paid taxes.

Total budgetary revenues were 2.3 percent lower in 2014 compared with the previous year and amounted to €12.497 billion. Budgetary expenditures increased by 4.1 percent y/y to €15.42 billion. Originally the revenues were budgeted at €14.108 billion and expenditures at €17.392 billion, the SITA newswire reported.

The biggest problem of fulfilment of the budget in 2014 in particular was income from the budget of the European Union. This decreased by as much as 42.2 percent y/y to €1.258 billion. This meant only 39.6 percent of the planned amount was received.