MOST people in Slovakia want to live in a country in which the state is on the side of decent and diligent people, said President Andrej Kiska in his first New Year’s address, which was welcomed by political analysts who appraised his focus on citizens rather than domestic politics. 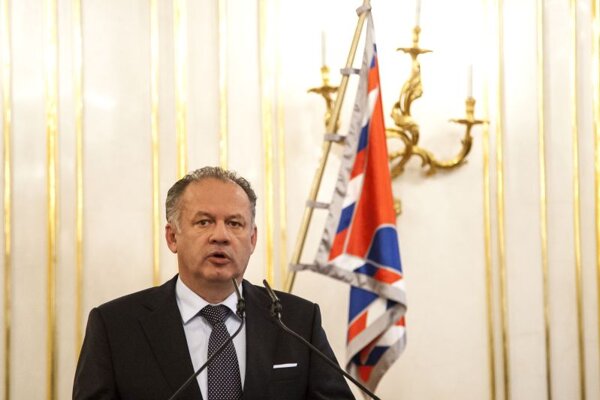 MOST people in Slovakia want to live in a country in which the state is on the side of decent and diligent people, said President Andrej Kiska in his first New Year’s address, which was welcomed by political analysts who appraised his focus on citizens rather than domestic politics.

“Most people want a state that will be responsive to their social needs,” Kiska said in his address, “not only in the form of slogans and campaigns, but by taking measures with respect to specific cases of people who find themselves in an unsolvable situation due to sickness or life’s adversities.”

Political analyst Miroslav Kusý described his speech as a personal message to Slovak citizens highlighting people’s needs. Despite Kiska mentioning the most serious problems of Slovakia, his speech was rather positive.

“It was something like positive encouragement of citizens for this year,” Kusý told The Slovak Spectator. “It is the first presidential speech when we can be proud of our president.”
Another political analyst Ján Baránek, in an interview with the Hospodárske Noviny daily, also evaluated Kiska’s speech positively citing his willingness to touch on all the country’s important issues.

Kiska listed Slovakia’s problems including corruption and an overgrown bureaucracy and appealed to citizens to be decent and diligent. In comparison with his predecessor Ivan Gašparovič, this speech was better and more specific, according to Baránek.

Besides the social state, Slovaks also need a well-functioning state that would be able to respond quickly to various problems and to provide flexible support for meaningful projects and good ideas that would contribute to the country’s advancement, Kiska said. “Slovakia is not such a big and wealthy [country] that we can afford to ignore innovative projects and socially beneficiary initiatives,” he continued.

On the other hand, people complain that some rules make it too difficult for meaningful projects to be implemented. It is not rare, according to Kiska, for proactive people to be unable to overcome obstacles in an incorrupt way, while others manage to do so using corrupt practices.

“Corruption is in fact a much bigger problem than anything else,” Baránek said, as quoted by Hospodárske Noviny. “However, people do not fully realise that if there was a lower amount of corruption, the living standards of Slovaks would be much higher.”

Kiska further called on all people to create effective pressure on politicians to come up with ways to improve the management of the state and public institutions in the year ahead, which will most likely be marked by the run-up to the 2016 general election.

“We will have a good opportunity to listen carefully to what has been accomplished [by politicians], to what is being stated and to how politicians view their future,” Kiska added.
He stressed that people should not be “chained with distrust” and distrust should not be the basic feeling of people when approaching the country’s problems. Baránek criticised this statement complaining about a lack of reasoning behind his words. Kiska did not specify who or what people should trust, nor did he mention a reason why it is important to not be distrustful, Baránek said.

He also pointed out that Kiska did not mention the importance of a functional traditional family as his predecessor often did, noting that Kiska had publicly pledged his support for two February 7 referendum questions initiated by the Alliance for Family (AZR) that seek to constitutionally define the concept of family.

“Kiska did not consider it [referendum] to be so important that it should be mentioned in his speech,” Kusý said. “By this he pointed to the importance of this issue.”

One big surprise, political analyst Michal Horský told the TASR newswire, was that Kiska spoke about the Russian-Ukrainian conflict and called on Slovaks to endorse international law.

Kiska stated that there are no guidelines on how to react to this situation, but he added that nobody has the right to challenge the fundamental principles of sovereignty, self-determination and the right to make one’s own decisions.

“It is in our own interest to contribute towards the unity of Europe in this principal issue by our actions,” Kiska said.

Kiska did not support Russian actions and indirectly described Russia as the state which unlawfully occupies Crimea. Kiska said that people would not accept the presence of foreign armies in Slovak territory, which said a lot about his opinion, according to Baránek.

“His opinions on this issue are well-know for a long time,” Baránek told the SITA newswire.