INVESTING into research and development has become more tax-advantageous for companies in Slovakia after tax changes adopted by the Robert Fico Government last October became effective as of the beginning of 2015. The R&D-related tax change is one of a few positive changes adopted within the tax changes package as it will save companies €24 million annually. Companies would like to see more robust support. 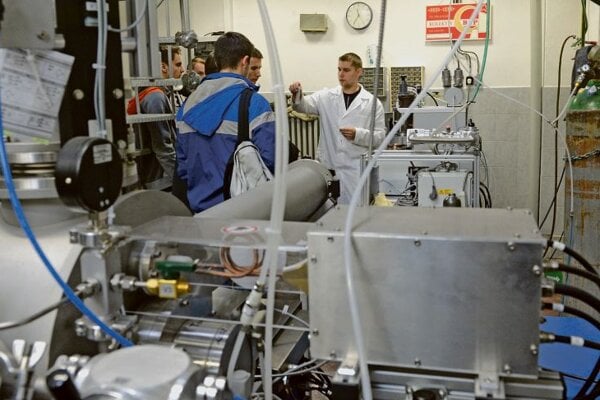 INVESTING into research and development has become more tax-advantageous for companies in Slovakia after tax changes adopted by the Robert Fico Government last October became effective as of the beginning of 2015. The R&D-related tax change is one of a few positive changes adopted within the tax changes package as it will save companies €24 million annually. Companies would like to see more robust support.

The Fico cabinet hopes that the measure will help companies to employ more scientific workers and help turn Slovakia from an assembly hall into a country of state-of-the-art technologies and innovations.

“We realise that Slovakia can’t be dependent on assembly work and a cheap labour force in the long term and that we have to bring in far more new ideas,” said Prime Minister Robert Fico on January 2 when recalling that companies investing into research and development can reduce their tax bases and thus also corporate tax paid. “We want to motivate business entities which have their R&D bases to continue more intensively.”

“Many companies already established on the market are realising that it is worth it for them to do R&D in Slovakia,” Martin Rybár from Deloitte told the Pravda daily. “Thus there exists space for an increase of expenditures in this field. But many of them also realise that other countries offer them more significant support.”

According to Vladimír Baláž, a prognosticator from the Slovak Academy of Sciences, with this measure Slovakia has started to catch up with western Europe and also neighbouring countries.

“What we have established in Slovakia is something standard that has already been existing in developed countries for a long period of time,” Baláž told Pravda, recalling that neighbouring countries like the Czech Republic, Hungary as well as Poland introduced such support a long time ago.

But some economists view the measure as selective and supporting only part of the country’s economy.

“Research and development is only a subset of a bigger category with the name innovations,” Richard Ďurana, the director of the Institute of Economic and Social Studies (INESS), told Pravda. Pointing out that there are also a lot of not so ‘sexy’ innovations other than those technological, but which still have economically comparable effects. Thus he is afraid that with the attempt to define what an innovation is, which is a precondition for companies to utilise this measure, Slovakia could muffle business creativity in other fields.

“It would be better to reduce taxes for all entrepreneurs in order for them to also carry out innovations in a cheaper way which will not make it on the front pages, but have a positive impact on consumers as well as the country’s economy,” Ďurana said.

The economic think tank INEKO shares the same opinion, seeing proving exceptions as a bad direction which the state has taken.

“Individual exceptions should be cancelled, the tax base should be extended and tax rates and conditions should be the same for all entrepreneurs,” Peter Goliaš, the head of INEKO, told the online version of the Hospodárske Noviny.

The disadvantage also is that it is difficult to establish exactly what an expenditure on R&D is and what is not.

“The risk is non-transparency and ineffectiveness,” Goliaš said.

Because of this Róbert Kičina of the Business Alliance of Slovakia (PAS) perceives this measure in a controversial way, as well.

“While there is an assumption that companies would be more motivated to invest in research, space is being created for speculation, as it would not be possible to sufficiently assess the effectiveness of funds spent on research and development,” said Kičina.

“Also based on arguments [that there is missing a definition as to what science and research are] we were fighting against this instrument,” said Kažimír as cited in the online version of Hospodárske Noviny. “This is the reason why we agreed with only a small percentage. We want to examine this instrument… Also together with the opposition we adopted an amendment based on which all reductions would be published.”

The Fico government admits that the support to R&D may increase in the future based on the condition of the state treasury.

Companies would like to see greater support. They complain that this support is not motivating enough, that it increases the administrative burden as R&D expenditures should be accounted separately from other expenditures.

“We wanted it to be [the additional reduction of the tax base] at least 50 percent in order for it to be at the level of neighbouring countries,” Martin Hošták, the secretary of the National Union of Employers (RÚZ), told Pravda.

The Federation of Employers’ Associations (AZZZ) sees the reduction of 75 percent as a sufficient stimulus, while the Economy Ministry has proposed it at 60 percent, according to the Sme daily.

The additional reduction of the tax base by a portion of R&D expenditures is only one of a number of changes the Robert Fico cabinet made to corporate tax in late October. The cabinet cited consolidation of public finances and closing legal loopholes as the motivation for the changes.

Tax experts and economists see changes in depreciation as the most significant. As depreciation reduces the tax base and thus the final tax paid, a longer period of depreciation means higher taxes paid. They see as the biggest problem that the changes apply also to existing assets and not only to new ones.

The revision increases the number of depreciation groups from four to six, shortens depreciation of production technologies from 12 to eight years and prolongs depreciation of non-productive real estate, i.e. office buildings, hotels and blocks of apartments from 20 to 40 years.

The revision also caps the price of motor vehicles that business entities can depreciate and introduces a limit on depreciation of assets which a business person can also use privately.