THE YEAR 2003 meant a change for Slovakia in the area of development assistance when it transformed from the receiver to the donor. This was allowed by positive developments of its political and economic situation, as well as its accession to international structures, according to the SlovakAid.sk website. 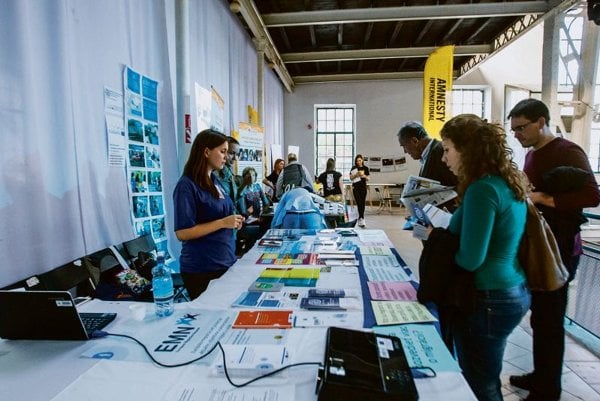 THE YEAR 2003 meant a change for Slovakia in the area of development assistance when it transformed from the receiver to the donor. This was allowed by positive developments of its political and economic situation, as well as its accession to international structures, according to the SlovakAid.sk website.

The country however, still lags behind its commitment regarding funds for development aid, according to the platform uniting the organisations active in this area. Despite the participation of non-governmental organisations and state institutions in the projects, it has failed to attract the business community.

Since 2003, Slovakia has joined 500 projects in nearly 20 countries of the world, said Foreign Affairs Minister Miroslav Lajčák, whose ministry is guarantor of the development aid.
“Slovakia does not only directly provide the development assistance, but through its diplomats and experts it also participates in creating and forming the international development system,” Foreign Affairs Minister Miroslav Lajčák told The Slovak Spectator.

The mechanism of providing development assistance was established in 2003 by creating the institutional, legal, and strategic framework for the Slovak development programming. Since then, Slovakia has been engaged in bilateral development assistance programmes and projects carried out in the developing countries, in addition to providing multilateral assistance and humanitarian aid. Simultaneously, since 2004, as a member state of the European Union, Slovakia has been engaged in the funding of development activities carried out by the European Commission, SlovakAid.sk states.

In 2013, Slovakia also became a member of the Development Assistance Committee of the Organisation for Economic Cooperation and Development (OECD).

The country provides the aid within the SlovakAid system which creates a broad spectrum of programmes and tools, according to Lajčák. The country does not only implement the projects directly in target countries, but also sends volunteers and experts, secures educational stays for people from development countries in Slovakia, finances scholarships for foreign students, and offers financial and material humanitarian aid.

It however, does not fulfil its commitment to allocate 0.33 percent of the gross domestic income (GDI) for development assistance. In 2013 it sent €64.84 million, or 0.09 percent of GDI, for the assistance, Andrea Girmanová, project manager of the Slovak NGDO Platform which represents non-governmental organisations dealing with development assistance of Slovakia, told The Slovak Spectator.

According to her, the country lags behind other countries of the Visegrad Group, i.e. Poland, Hungary and the Czech Republic.

Regarding the structure of the development assistance, Slovakia allocates most of the finances for multilateral cooperation (€52.68 million, most of which went to the EU budget). The contribution for bilateral cooperation in 2013 was €12.15 million, according to Girmanová.

The target countries to which Slovakia sends the multilateral aid are selected by the international organisations, Lajčák said.

Regarding the programme countries, the assistance focuses on the improvement of health care, including the accessibility of health care, increasing the quality of education at all levels emphasising the employment opportunities for young people, supporting socio-economic development in rural areas and environmental protection as well as strengthening good governance skills, according to the the SlovakAid.sk.

In Kenya, the projects are aimed mostly at health care, agriculture, education, and support of employment, while in Moldova there are also some projects concerning decent realisation and reform of the public administration as well as finances. Moreover, Slovakia also carried out some projects concerning water, as there are problems with potable water, Zuzana Letková, director of SAIDC, told The Slovak Spectator.

In Afghanistan, the projects target education (especially the university level), support of employment, the education of girls and women, and health care, she added.

Slovakia also allocates money within the humanitarian aid provided to countries in emergency situations. In 2014 this included countries of the Middle East affected by the civil war in Syria and its consequences, Lajčák said.

Moreover, the NGOs also carry out projects in other countries, mostly thanks to contributions from the public, Girmanová said.

Among the successful projects carried out by Slovakia, Lajčák mentioned helping hundreds of orphans and children living on the streets to find homes and receive basic health treatment as well as basic education. Moreover, Kenyan producers of Macadamia nuts and cashews can sell their products for “fair” prices thanks to the assistance; while dozens of women from slums in the Kenyan town, Eldoret received education as seamstresses and hairdressers and became economically independent. The Slovak projects also aimed at preventing the transmission of AIDS from mother to child.

The minister also recalled experts from the Western Balkans and the Eastern Partnership countries who came to Slovakia to acquire experience in the transformation to a democratic regime.

Letková mentioned the cooperation with the Slovak University Technology in Bratislava (STU) in Afghanistan where they established, for example, the Faculty of Chemistry at the Polytechnical University of Kabul. Another successful project was the opening of a gastroenterologist centre in Kabul.

Lajčák and Letková say that it is the NGOs who are most interested in participating in the development assistance. There are about 30 NGOs with at least some experience with development assistance projects. Also the interest of businesses, state institutions and municipalities is increasing, Lajčák said.

Regarding the companies, he mentioned Slovak pharmaceutical companies which provided Ukraine with medicaments worth €75,000.

A new law on development assistance, which is currently being prepared, might solve this problem. It should include “new financial modalities which should simplify the engagement of business entities”, according to Letková. The law should come into force in 2016.

Moreover, 2015 officially became the European Year for Development, the first ever European Year to deal with the European Union’s external action and Europe’s role in the world. The EU will try to explain to people how its development aid works and demonstrate that it makes a real and lasting difference, according to the official website.

On this occasion, the Slovak NGDO Platform plans to promote, in cooperation with the ministry, the development assistance and global education via various activities.

“We believe that the European Year for Development will offer space for broader participation of Slovaks into discussion about the development assistance and its global context,” Girmanová said.