SALOME, the one-act opera premiered more than 100 years ago, was chosen to commemorate the 150th anniversary of its composer, Richard Strauss. The demanding work is also enhanced by its specific musicality among the wide spectrum of performances the operatic section of the Slovak National Theatre offers. 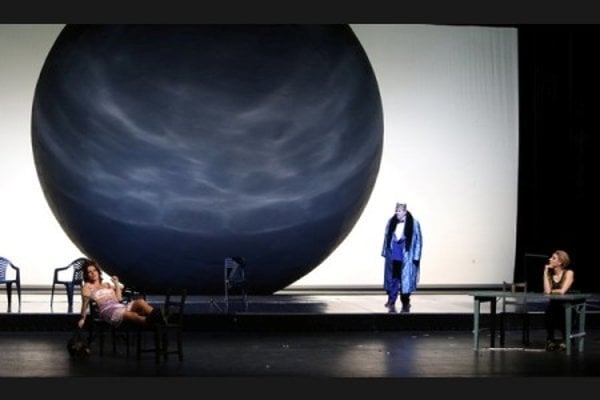 SALOME, the one-act opera premiered more than 100 years ago, was chosen to commemorate the 150th anniversary of its composer, Richard Strauss. The demanding work is also enhanced by its specific musicality among the wide spectrum of performances the operatic section of the Slovak National Theatre offers.

Premiered in November 2014, this Bratislava staging combines the demanding score, the Biblical story with a deeper, universal message, and a modern setting.

Directed by German Hans-Joachim Ruckhäberle, musically it was rehearsed and conducted by head of the SND opera, Friedrich Haider (alternately with Ondrej Olos); an impressive stage was designed by Uwe Kuckertz and Helmut Staubach, up-to-date costumes by Ngozi Unamba-Oparah. The choreographer is Igor Holováč, while the dramatic advisor is Slavomír Jakubek.

Richard Strauss is known as a composition virtuoso who worked brilliantly with the rich palette of post-Romantic orchestral expression, masterly using the beauty and flexibility of human voice, while also utilising the full expressive features of their instruments. While his later works increasingly leaned towards the past and resigned on the avantgarde exploration, his first two mature pieces, single-acts Salome and Electra, brought him to the opera stage as a daring and philosophically mature author who moved the interpretation tools and drama to new limits, according to the SND’s bulletin.

The opera that was premiered in 1905 reflects the heavy, disillusioned atmosphere of “fin de siècle”. The traditional Biblical story of the prophet John the Baptist and the love of a spoiled step-daughter of the emperor who, insulted by his indifference and spiritual zeal, asks for his head, has acquired new, universal meanings. The music, the decadent provocative costumes and the inventive stage design all stress the atmosphere of wealth, boredom, superficial relations and moral decay in which John the Baptist stands out as contrast and the role model.

The contrast of the sensual, physical approach and the spiritual, love and hate (intertwined and quickly moving one into another), manipulation and an open heart, lack of values and a firm moral stance create an eternal conflict that can also capture the modern audience.

Richard Strauss took the tragedy by Oscar Wilde and created the prototype of a modern and highly original one-act play, the SND bulletin reads, adding that Italian Giacomo Puccini premiered his three one-act operas in 1918; and although veristic; one-act operas by Italian composers Pietro Mascagni (Cavalleria Rusitcana) and Ruggero Leonacavallo (Pagliacci) had already existed, but Strauss took a different path: not just in terms of poetics, but in the structure of the one-act opera.

Salome impresses with its incredible compaction of all three theatrical elements, time, setting and events, dramatic advisor Slavomír Jakubek writes in the bulletin. The unpredictability of characters’ actions when dramatic events are absent of plot logic, but rather result from the psychology and character setting. Strauss’s perception focused on the two main characters of the story, Salome and Jochanaan, which subsequently required a characterisation shortcut for the other characters.

“It is already my fourth production of this piece by Strauss, but it is nevertheless not an easy version and stageing,” conductor and head of the SND opera Friedrich Haider said, as quoted by the TASR newswire. “Strauss’ music is the loudest that currently exists among operatic literature; it is demanding to attune the loudness of the orchestra with the vocal performances onstage.”

“True, the premiere of this opera took place in 1905. But not that much has changed since then, and that’s why we have not approached this work as historical,” Ruckhäberle said. “Salome crosses the limits dividing the inner world from the outer one; life from love and death. She is uncompromising, seeks fulfilment in love, and fights to be allowed to love a human, not an idea,” the director explained.

“In this season, the SND opera in a way continues to congratulate great composer personalities [on their anniversaries]... recently, it was Giuseppe Verdi and Richard Wagner, and now it is Richard Strauss whose 150th anniversary we commemorate,” Jakubek added, as quoted by TASR. “After Wagner, he is the greatest continuator who symbolises some kind of bridge between romantic music, romantic operatic theatre and modern music-dramatic literature of the 20th century. Strauss is a very prolific author who wrote many operas. Salome represents a certain highlight of his work,” Slavomír Jakubek summed up.

Salome diverts from the “classical” Italian operas, both in form and in content, and it may be intriguing to compare it with the later ones.