Krupina’s gate to the past

TOWN gates used to be part of the image of Slovak towns in the past. Many towns were protected by walls, and it was their gates that were crucial and often the most resilient point of the town fortifications. 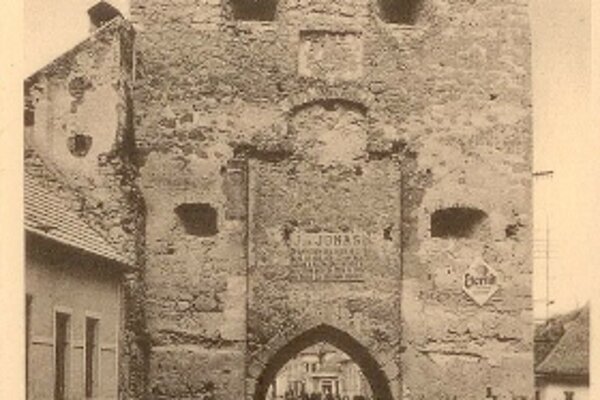 Only being able to resist enemy cavalries, the gates later failed to confront new challenges. When fortifications lost their justification, towns started to expand and it was the gates that often were the first to pay price for that. They were first demolished in the 19th century – and the one in this postcard from the 1920s stood in Krupina until 1942.

The lower gate was built in 1551 for protection against Ottomans. The construction was complex for towns, often too demanding. Krupina, too, was fortified only gradually and first just simple and unconnected walls grew around the town.

A breakthrough came in 1553 when the land council pronounced Krupina a border castle. Thus, it became a defence bastion against Ottomans for the next two centuries. Thanks to this privileged position, the town got numerous advantages and concessions. For example, in 1559 Emperor Maximilian ordered four regions, Turiec, Zvolen, Liptov and Orava, to render people for construction of Krupina fortification without pay.

It also was allocated as a strong garrison of 400 horsemen and 189 infantrymen led by Captain Ján Krušič. Soldiers were both protection for Krupina and a curse, as their caprices had to be repeatedly dealt with at the imperial court.

In spite of its considerable force, the garrison was struck by tragic fate: in 1562 it made a brave charge against the Ottomans but nevertheless lost the battle. Most of the soldiers died and Captain Krušič was captured. However, he survived prison in Istanbul, unlike many others, and three years later he managed to return to Great Hungary.