THE VAST majority of around 3,000 foreigners who have applied for free rail travel in Slovakia are pensioners from the Czech Republic. The Slovak Tourist Board (SACR) admits that free travel could draw foreign tourists, however the country’s official tourism web site is doing little to promote this possibility. 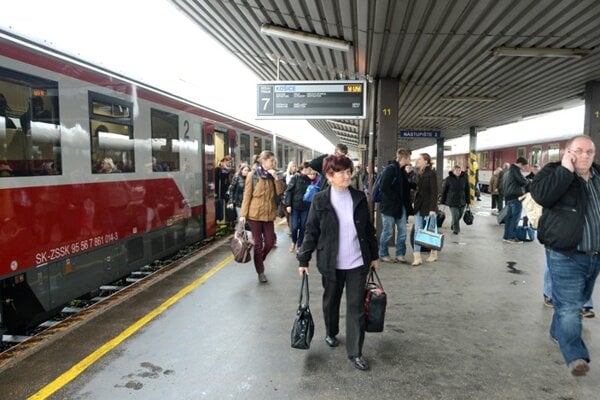 THE VAST majority of around 3,000 foreigners who have applied for free rail travel in Slovakia are pensioners from the Czech Republic. The Slovak Tourist Board (SACR) admits that free travel could draw foreign tourists, however the country’s official tourism web site is doing little to promote this possibility.

As of November 17, students and seniors less than 62 years old who are citizens or permanent residents of European Union member states are eligible for free travel using the national railways. It is available also for children under 15 years of age and seniors over 62 years of age without limitation by EU citizenship or residence.

The state-run carrier Železničná Spoločnosť Slovensko (ZSSK) registered 3,062 foreigners among the 443,704 persons who applied for free travel until January 11. Of those foreigners 2,512 are pensioners, 330 are students and 220 children less than 15 years old.

“[Foreigners who are] tourists used long-distance travels mainly,” ZSSK spokeswomen Jana Morháčová told the Slovak Spectator, “people who work in our [Slovak] territory or those who had duties here used regional rails in certain intervals.”

Free trains could promote tourism and motivate families or grandparents with grandchildren to make more trips in Slovakia, according SACR spokesman Martin Šebesta.

“We can presume that the money which tourists will save on fares, they subsequently spend to stay longer in Slovakia or to visit interesting places,” Šebesta told The Slovak Spectator. “It may also inspire pensioners to travel more often to the spas or to recreational facilities during the off-season period, which will be a positive for firms operating in tourism sector.”

Transport Ministry spokesman Martin Kóňa agrees, adding that travel costs are many times the significant part of expenses of anyone who decide to make a trip somewhere. Therefore, free travel is advantageous particularly for social groups with lower incomes.

It could be difficult however for foreigners to find out that there is possibility of such free rail travel on relevant websites including the official tourism information portal Slovakia.travel. Asked about this by The Slovak Spectator, Šebesta responded that SACR shares this with foreign representatives and at international fairs or exhibitions.

Both SACR and Transport Ministry representatives pointed out that it is foremost the ZSSK’s responsibility to promote such free travel.

“It is carrier’s responsibility to promote its services and new products which it offers to wider society,” Kóňa said. “Also those who provide services in tourism can use this fact in their marketing or other presentation activities.”

However, it was hard to learn about free travel possibilities on the English version of ZSSK website’s front page on January 14, though the site did provide some practical information in English and German in passenger transport section.