THE GRASSROOTS Alliance for Family (AZR) collected more than 400,000 signatures to put ballot questions that could ultimately amend the constitution to tighten the definition of family and ban same sex couples from adopting children. President Andrej Kiska has set February 7 as the date voters will face three referendum questions: Do you agree that only a bond between one man and one woman can be called marriage? Do you agree that same-sex couples or groups shouldn’t be allowed to adopt and raise children? Do you agree that schools cannot require children to participate in education pertaining to sexual behaviour or euthanasia if their parents don’t agree? 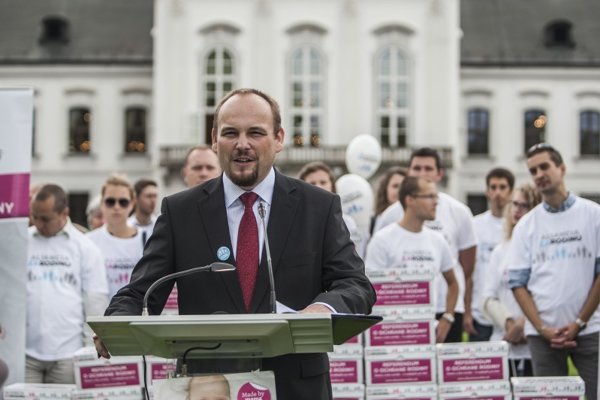 The Slovak Spectator sat down with one of AZR’s key organisers, Anton Chromík, in his law office to talk about the ballot initiative.

The Slovak Spectator (TSS): There was already a constitutional amendment in 2014 banning same sex marriage, why is more necessary?

Anton Chromík (AC): Most important are children. The amendment didn’t solve the problem with adoption of children and education. Marriage is exceptional and there is no institution like marriage, and we want to see it as an institution that is central to children. Married households are the best environment for children.

TSS: There are many children in orphanages or growing up in single parent households. Is it not better to have two parents who love them and raise them?

AC: This seems like Sophie’s Choice. It’s not a solution for children. There is no choice between gay couples or orphanages. There is a problem with orphanages, we must solve this problem, but these children need to see a man and woman in a normal relationship to see the model for their own life. It’s a big tragedy when there is only one parent, because the child knows somebody is missing. Maybe it will be better with two people, but if two people of the same sex, why not three? Why not four? Is there any moral line?

TSS: One referendum question seeks to allow parents to opt children out of sexual education in school. Why is that a good idea?

AC: Children need parental education. This is very near to moral values and parents have a right to say no.

TSS: Sometimes parents are bad parents, what about cases where parents fail to educate children on these matters?

AC: Can I ask, did you have sexual education in school?

AC: I did not. I have five kids and it is absolutely normal. There is a big difference between sexual education and sexual training. We have a big problem with sexual training in schools now.

TSS: The argument why sexual education is needed in school is that it is a public health issue, that people who do not have sexual education are more likely to spread disease, they may have children they are not going to take care of and so on. You don’t agree?

AC: In Slovakia, without sexual training we have much less teenage pregnancy. We do not have as high teenage pregnancy as in Britain, for example. They have eradicated their moral values. First it is the parents, not some liberal state values that want to educate first grade students about condoms and so on.

TSS: You have the support of the country’s bishops and the Catholic church is quite influential in Slovakia, does the church participate in campaigning?

AC: We have support from the Protestant bishops, Catholic bishops and Jewish leaders, and 107 supporting organisations. Of course priests speak about it, it is their belief.

TSS: How was this organising campaign financed?

AC: By very small donors. We have just one person who is paid for a part time job. Everybody else is a volunteer. There are 5,000 people who worked for months as volunteers. This is the first referendum in our country generated by the civil sector.

TSS: It seems obvious your questions will get more than 50 percent support among those who vote, but what about the requirement to get 50 percent of registered voters to turnout?

AC: This is a big challenge, but our goals are not strictly defined by the legal success of the referendum. The process has been important, people are more oriented toward family values than before. In the past we had an unsuccessful referendum about a direct vote for president, for example, but now we have it.

TSS: If the referendum questions don’t succeed would you try again?

AC: It’s possible, but this is a fictional question. We want to save marriage in Slovakia. We will try again if needed.

TSS: There is a feeling in the LGBTI community, and not only inside that community, that these referendum questions are discriminatory. Aren’t they?

AC: We must respect every person. Private life is private life. But we cannot say marriage is of the same value as a gay partnership. It is not about one person being more precious than the other. The fact that marriage brings the miracle of life means much more than anything else. In this country no law takes any rights from anyone, it is just that for us, rights of children are more important than rights of adults.