KOŠICE zoo has organised, once again, for unsold Christmas trees to be used for their animals. Traditionally, they are given by the Košice City Forests company as a delicacy for the forest and mountain ungulates to intersperse their winter menu. 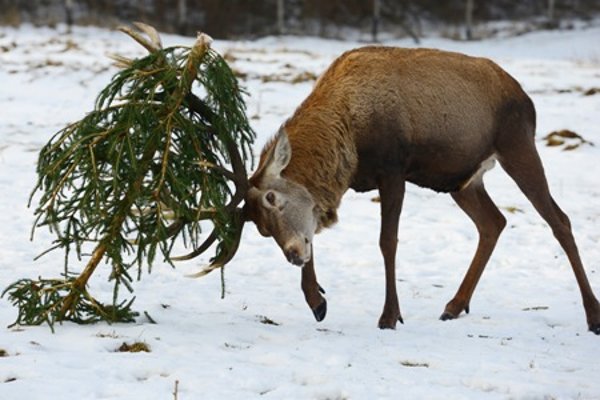 “In this way, the zoo strives to create natural conditions; as in the wild, animals, too, add energy in winter by gnawing at needles and tree bark,” zoologist Patrik Pastorek said for the TASR newswire. “They find in them the substances beneficial to their metabolism.”

On January 13, keepers served the trees to moufflons, chamois, tahrs, goats, deer and Indian takins. This temporary nutritive additive has proven itself well in the herd of takins which enjoyed it until the very last shoots of branches.

In the red deer family, the dominant 7-year-old male took control; first tossing the Christmas tree wildly on his antlers to show his power and majesty. Only then, other members of the herd were allowed to come closer.

Chamois and moufflons are always delighted to get the trees, leaving only bare remains.

Eva Malešová of the Košice zoo said that the already used Christmas trees cannot be given to animals, as they could contain remains of Christmas decorations, e.g. metal hooklets.