Goudrons are removed from the dump, locals find it dangerous

GOUDRONS are particles of man-made tar used in the construction sector. A big dump of these environmentally dangerous particles has been located from more than 50 years ago in the Srdce / Heart quarry near the borough of Devínska Nová Ves in Bratislava, where about 30,000 cubic metres of the toxic waste, mostly from the former oil refinery Apollo, lie. 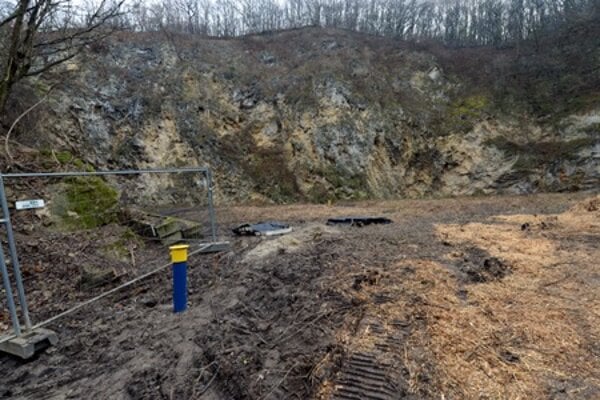 Until the end of August 2015, dangerous goudrons should be removed and disposed of. By mid January, lorries have been removing the polluted soil – but even this has caused fears.

“Lorries are driving without tilts, and terrible smell and steam emanate from the deck,” local inhabitant and councillor of the Devínska Nová Ves council, Michal Gašparík, wrote in a letter to the Regional Office of Public Health asking it to check on the operation.

Since mid December, a consortium of five companies explained that goudrons will be taken away form the locality in special containers but the soil on common lorries. Gašparík does not like this, he warns that lorries do not transport clean soil but contaminated.

“It is impossible to separate the contaminated soil from uncontaminated – they have no means for that,” Gašparík complains, as quoted by the TASR newswire. “And it is driven under the inhabitants’ balconies,” he adds.

“In this phase, strip soil is being transported which does not threaten human health, and thus it does not have to be driven in covered lorries,” Denisa Vološčuková of the PR agency representing the consortium explained, without answering the question whether the transport of contaminated soil required the lorries to be covered with tilts.

Vološčuková pointed out that the rules for mining of goudrons have been approved by the Environment Ministry, and there is a safety controller who oversees the process.

Goudrons should start being evacuated in special covered containers around January 20. The work began in winter intentionally, as temperatures under 10°C are ideal for goudrons – they are in a solid state then, and this makes their mining and transport easier, as the evaporation of volatile substances is lower.

Decontamination geologist Peter Sekula warned before the start of the works that locals may smell a mild stench of mercaptan – which is used to give colour to natural gas; it is unpleasant but not dangerous.

Goudrons are removed with money from the European Union, while the Environment Ministry has signed a contract with the A.S.A. Enviro consortium worth almost €11.9 million. Part of the waste from goudrons will be burnt in a cementation furnace and thus recycled.

“Especially the soils used in the past to cover goudrons and should have prevented direct contact between people and goudrons cannot be recycled energetically,” Sekula explained. “These will be either solidified or their cleaner parts will be recycled by bio-degradation in technology facilities.”

The dump encompasses almost 4,000 square metres. The dangerous waste was brought to Srdce in 1963, and the surface was covered with a layer of clayish soils. The locality is included in the Protected Landscape Area Small Carpathians and the National Natural Reserve Devínska Kobyla.