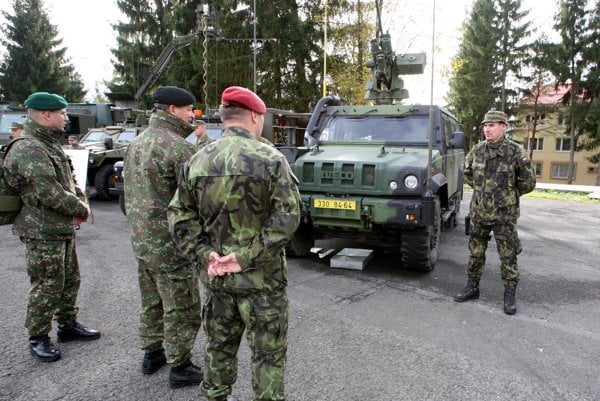 Meanwhile, it is still unclear whether Slovakia will buy Black Hawks from the United States, but it seems the price for an initial set of nine is lower than anticipated.

Former defence minister Ľubomír Galko of Freedom and Solidarity (SaS), who was in office from July 2010 to November 2011, launched a programme to gradually replace the existing fleet of Soviet-era UAZ all terrain vehicles, and Glváč looks set to continue.

“The Ministry has probably some unspent finances from the previous year,” Central European Policy Institute (CEPI) analyst Jaroslav Naď told the Denník N daily. “But it’s still better for the army [to buy vehicles] than to return saved money back to the [state] budget.”

The Land Rover purchase will go through the NATO Support Agency (NSPA), the organisation’s integrated logistics and services provider agency.

“We try to use this way when it is beneficiary,” Glváč said, adding that Slovakia just wrote what it wanted to buy and NSPA made an agreement on conditions with a supplier.

“It is a good way [of buying],” he said, as quoted by Denník N. “Various suspicious suppliers will not infiltrate such purchases.”

Meanwhile, Glváč stated that Slovakia is set to pay less than €300 million, which was the original funding framework, for nine Sikorsky Black Hawk military helicopters.

“The price is a lot lower than what the media reported,” said Glváč, as quoted by the TASR newswire, after a session of parliament’s defence and security committee on January 22, adding that the sum of €300 million was just an estimate framework and €45 million remains in Slovakia as VAT.

The purchase is to be made through the US Foreign Military Sales (FMS) fund, which Glváč said was the most transparent way.

US Ambassador to Slovakia Theodore Sedgwick told the press that it allows countries to buy military hardware under the same conditions enjoyed by US armed forces.

Galko highlighted an international tender as the better option for purchasing helicopters.

“I’m 100-percent certain that only an international tender could produce the best offer for us,” said Galko, as quoted by TASR.

Róbert Ondrejcsák, director of the non-governmental think tank Centre for European and North Atlantic Affairs (CENAA), stressed that the final price is still unclear since the Slovak army needs approximately 18 helicopters and the public knows only about the price for the first nine.

So far the Defence Ministry is tight lipped about details as well as alternatives to Black Hawks until Glváč discusses the possible contract with the Security Council and government.

Ondrej Rajkovič, a reporter for the Czech army news website Armádní noviny, told The Slovak Spectator that there are several helicopters which could fulfil ministry’s demands including French Eurocopter AS532, English-Italian Agusta -Westland AW149 and NH-90 made by NH Industries.

It is hard to say whether the price is adequate for such helicopters. Mexico was considering to buy 18 UH-60M Black Hawks for USD680 million and Brazil wanted three for USD140 million. There are differences because price is related to equipment, support and spare parts, according to Rajkovič.

“It would be unfortunate to evaluate this price without knowing details of purchase,” Rajkovič said.