AFTER two previous stints in Bratislava, with the shows Saltimbanco and Alegria, Canada’s Cirque du Soleil is back in the capital city with its Quidam performance. 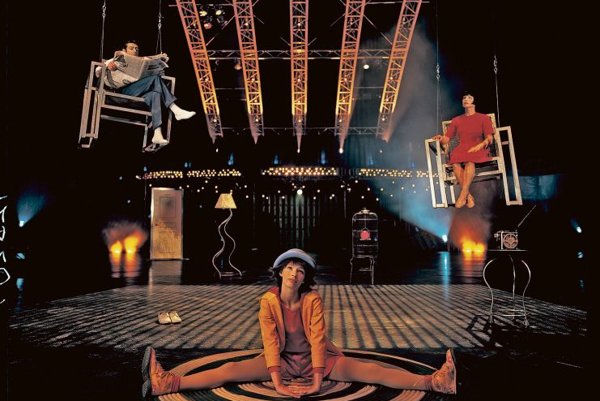 AFTER two previous stints in Bratislava, with the shows Saltimbanco and Alegria, Canada’s Cirque du Soleil is back in the capital city with its Quidam performance.

“Each show created by the Cirque du Soleil has its own story and own team of people,” said Lucia Šuková, of the Vivien agency, which organised the tour stop in Slovakia.

Quidam features as its main character a young girl Zoé who is bored and her parents ignore her; with her whole life seeming meaningless. Seeking to fill the void, she escapes to an imaginary world, the world of Quidam.

It has been 30 years since a grouping of street artists called Cirque du Soleil gave its first performance in Quebec. From the 20 jugglers, fire-eaters and clowns that founded the group in 1984, the Quebec-based organisation now comprises 4,000 employees including 1,300 artists from more than 50 countries.

The current head of the group is Guy Laliberté and the artistic director is Gilles Ste-Croix. Laliberté has become one of the richest Canadians in the meantime, and he is a noted philanthropist who actually travelled into space to point out the unsustainability of drinking water on Earth in 2009. The head of Cirque du Soleil is known to visit its performances all over the world, and in 2013, he watched the Alegria show in Slovakia.

Ste-Croix grew up in rural Quebec, “but he became a hippie and a nomad, living in communes and making the obligatory ‘60s pilgrimage to the West Coast,” according to Cirque du Soleil’s website. “Trying to conform, he even worked for an architect’s office for a while, but he knew in his heart that he was not cut out for a conventional business career.” Later, he founded his own company to produce a show involving horses, but since December 2002, he returned to Cirque du Soleil as vice president of creation and new project development.

Cirque du Soleil appeared as part of the celebrations of the 450th anniversary of the arrival of explorer Jacques Cartier to Canada, and was financed with subsidies from Quebec’s government. The first performance, Le Grand Tour, was presented in the small town of Gaspé, with the first tent comprising 800 visitors.

Since then, the Cirque’s shows have been watched by more than 100 million viewers in 300 cities of more than 40 countries on five continents. Bratislava is a regular stop and this time around, seven Quidam performances will take place between February 5 and 8 in the Slovnaft Arena.

The director of the current show, Franco Dragone, directed 10 productions between 1985 and 1998, and he also directed Alegria which came out in spring 1999.

“Unlike common circuses in which animals play the main role and which are popular mainly for children, the Cirque du Soleil performances are attractive especially for adult audiences,” Šuková told The Slovak Spectator. “Breath-taking presentations of professional acrobats and performers, dangerous elements combined with beautiful stage and music are a great spectacle for visitors of all ages.”

“Each show has traditionally a premiere in Montreal, later setting sail to tour the world,” Šuková said. “Artists usually have a series of performances for several weeks and then a break which they spend with their families.”

The two previous shows presented in Slovakia, Saltimbanco and Alegria, are no longer in production, Šuková said. However, new shows with new elements and technologies are always in development. Generally, the interval between Cirque du Soleil performances in Slovakia is every 18 months to two years and Quidam is definitely not their last, she said.