THE REPORTAGE and documentary photographer Sergej Protopopov is notable among a small circle of photography fans and he is rather well-known among collectors of postcards, especially those focusing on Banská Štiavnica and the surrounding region. 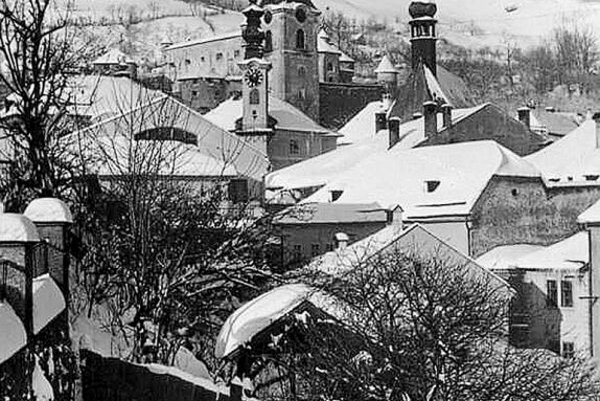 Among hobbyists with a keen interest in Štiavnica there is probably no collection where postcards from this Russian photographer are not represented. Protopopov’s pictures distinguish themselves with their high professionalism and ability to capture the most beautiful sights. This postcard from 1939 is emblematic of his talents and the snow-covered mediaeval town with the hill Paradajs in the background is a visual treat.

The Old Castle complex, together with the most important religious building in the town, the Church of the Blessed Virgin Mary are particularly notable. The originally late-Romanesque basilica resembles then monastery complexes in Austria and Germany, and according to one opinion, it was built by Benedictine monks from the monastery in Hronský Beňadik.

Precious metals were mined in Štiavnica for more than a millennium. Under the town and in its vicinity, there are kilometres of mining tunnels. So-called hereditary galleries that used to drain water from the mine field were essential for the mining, with the oldest such gallery, Glanzenberg, spreading directly under the centre.

But as hereditary galleries could not always reliably and quickly drain ground water, already in Middle Ages, the pumping device “rota artificialis” was used. It was probably a highly sophisticated mechanism, as the whole town council chaired by the mayor and attended by imperial mining štajger (expert on mining) usually decided on its use.