WHILE Slovakia remains the world’s biggest carmaker per capita, the country’s standing in automotive research and development (R&D) is a little less steady. 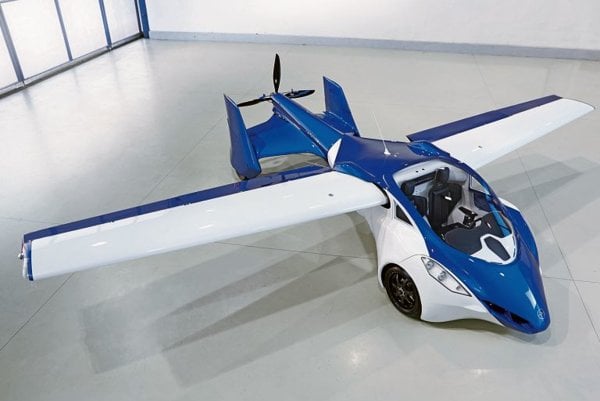 But there is a chance innovations in car components and machinery have an opportunity to grow and AeroMobil is an example of the kind of home grown innovation that would help business take off in the future.

“Development of the flying car is something unprecedented for the research and development,” Jaroslav Holeček, president of the Slovak Automotive Industry Association (ZAP SR) said in respect to the development of AeroMobil, a project led by engineer Štefan Klein and financier Juraj Vaculík. “Mr Klein and his group are innovators, who should be highly respected. What was a utopia at one time, is now a reality.”

After the unveiling of the AeroMobil version 3.0 at the Pioneer Festival in Vienna in October last year, and the demonstration it was able to take off again just two minutes after landing at an airport, engineers are working to finalise the prototype, Štefan Vadocz, spokesman of the AeroMobil company, told The Slovak Spectator.

The development of the vehicle shocked the world, but the company still must overcome significant barriers in certification and legislation before putting it on the open market. According to Vadocz, the vehicle must be certified in two different categories - as a car in M1 limited series category and as an ultra-light aircraft. Besides the certification it is also necessary to establish a legislative framework for a new overall category, as was the case with motorcycles, for example.

The company believes that legislation in that field shall reflect new trends in individual transportation in the near future, Vadocz said. Currently, they are talking to lots of officials at the highest levels within the EU and presenting their development to the Joint Research Centre of the European Aviation and Safety Agency.

So far, the engineers’ work on the vehicle has been mostly funded by Juraj Vaculík, co-founder and CEO of AeroMobil. Vaculík worked previously as a theatre director, was one of the leaders of the Velvet Revolution in Czechoslovakia in 1989 and besides investment in AeroMobil he owns the advertising agency Made by Vaculik.

At present, the company is trying to also receive financial support from the European Union.

“We submitted a proposal to Horizon 2020 - Research and Innovation Framework Programme, but our application for a grant was not successful,” Vadocz told The Slovak Spectator.

AeroMobil receives hundreds of requests every month to buy a vehicle, even though a selling price of the vehicle has still not been publicly presented.

“It is too early,” Vaculík told the TASR newswire.

Holeček of ZAP points out that AeroMobil will be accessible for people who have enough money and who need to move quickly. Vadocz said Aeromobil targets several markets.

“There is a clear need in the countries that lack infrastructure for cars to have legislation ready,” said Vadocz. “Then there are countries which have a strong sport and private pilot population and those are very interesting market segments too.”

According to Holeček, success of this vehicle will depend on future company’s partners that will help with mass production of AeroMobil. It will also be necessary to find a portfolio of customers for such a car.

“There will not be a problem with customers if the vehicle is perfectly mastered in serial production,” Holeček told The Slovak Spectator.

There are around 20 engineering teams developing similar vehicles in the world. Their flying cars are different mainly in methodology of transformation, functionality and other conceptual features.

“Our concept in the maximum measures unifies the features of a regular car and regular airplane without a single handicap – speed, dynamics, low fuel consumption, it fits a normal parking place and its design makes it an object of desire,” Vadocz said.

The flying car from Nitra can take two people to a distance of 875 km on the ground and 700 km by air on a single tank of fuel. It can fly at a maximum flight speed of 200 km/hour and can reach a top speed of 160 km/hour on the ground. The vehicle needs 250 metres of flat pavement or grass for takeoff and just 50 metres to land. Its construction is based on a steel frame and a carbon shell.

Besides AeroMobil, student engineers are also working on new vehicle designs. There are three teams with different fields of activities at the Faculty of Mechanical Engineering of the Slovak University of Technology (SjF STU) – AM Team, STUBA Green Team and FME Racing Team. AM is focusing on construction of vehicle powered by a combustion engine, STUBA Green is developing a vehicle with an electric engine and FME Racing Team is constructing a vehicle with minimum fuel consumption that participates in ECO Marathon competitions.

In October, the AM Team and STUBA Green Team presented their vehicles around Slovakia in specific competitions and showings at universities in five Slovak cities. The goal was to help recruit new talent to study at STU.

Besides this, all three teams have been participating in competitions abroad including Germany (Hockenheim Ring), the United Kingdown (Silverstone), Spain (Barcelona), Italy (Turin), Hungary (Győr), the Netherlands (Rotterdam) and the Czech Republic (Hradec Králové).

Every year student teams have to construct a new innovative vehicle using the latest technologies.

According to Magdolen, the latest FME Racing Team vehicle has a self-contained composite body that weighs just two kilograms, STUBA Green Team has reduced the original weight of their vehicle from 430 kg to 280 kg and the AM Team has improved control by changing the kinematic connections.

Cars were once also developed in Slovakia by a company from Bratislava, K-1 Engineering. Last year their automotive R&D was cancelled because of a lack of money and disagreements between shareholders. The company, founded by Dick Kvetňanský, had been constructing supersport cars like the K-1 Attack Roadster and K-1 Attack Racing and selling them mainly to western Europe and the United States.

“[In Slovakia] only subcontractors that have full-featured research centres here have been realising R&D,” Holeček told The Slovak Spectator, citing companies like Johnson Controls, Plastic Omnium and Matador.