Slovakia to harmonise European and national interests in gas

WHEN it comes to gas, Slovakia must weigh European interests along with its own, Prime Minister Robert Fico said at a press conference in Slavkov u Brna, Czech Republic, on January 29, the TASR newswire reported. 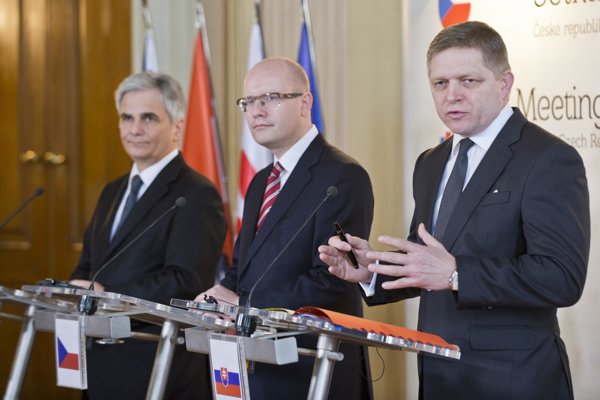 The Slovak premier was speaking after signing the so-called Slavkov Declaration at a meeting that also featured Czech Premier Bohuslav Sobotka and Austrian Chancellor Werner Faymann. The declaration provides a new format for regional cooperation, with the three officials also agreeing to hold meetings once a year.

According to Fico, should Ukraine cease to be a transit country for gas deliveries, Slovakia would record a major loss in revenues from transit fees.

"We’d lose out on huge amounts of money that we receive for allowing gas to flow through Slovakia on to the Czech Republic and to our Western partners," Fico said, as quoted by TASR.

Fico said that while European gas security needs to be considered, “we also need to consider the interests of countries that have for long been playing a major role in gas transit. This is our goal, and we‘ll treat it accordingly”.

Sobotka noted that he expects the European Council to come up with a joint position on potential further sanctions against Russia, which should be discussed at the extraordinary EU summit on February 12.

The Czech premier also stressed that it is important for Kiev to make effective use of loans from the EU towards reforms that the country needs urgently for its economic and social stabilisation, according to TASR.

Fico echoed Sobotka’s view, positing that sanctions have not stopped the killing in eastern Ukraine. A much greater focus should be placed on peace initiatives, he added.