Those travelling three times per week get 50 percent off. 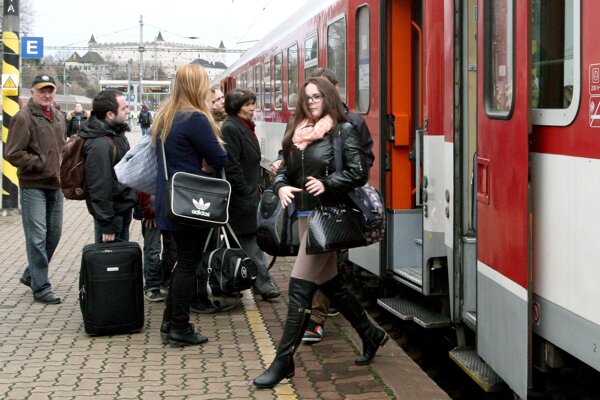 RAIL commuters will receive a 50 percent off their travel after Prime Minister Robert Fico’s government passed the second major discount for rail travel in recent months. The move comes after students and pensioners began travelling for free in mid November with commuters eligible for savings starting February 1.

Both measures are part of the €250 million package of 15 of financial, economic and social measures of the Fico cabinet, and bus companies complain they are being unfairly pushed aside.

“Our goal is to support mobility of the labour force in order more people use trains for commuting to and from work and in order travel costs were not a brake that prevented people from travelling for work,” Transport Minister Ján Počiatek said when the measure was launched, adding that in comparison with other countries Slovakia lags in support of labour force mobility.

Počiatek added that it is important to support and increase attractiveness of passenger rail transport as it is the most ecological and safe forms of travelling.

The new measure unites and increases existing discounts of one-week and one-moth train passes up to travel distances of 210 km to 50 percent. Original discounts ranked to 30, 35, 40 and 45 percent, depending whether commuter bought a weekly or monthly pass and whether this was one-way or return pass. The new discount applies to second-class rail transport on trains run by the state-run passenger carrier Železničná Spoločnosť Slovensko (ZSSK) and private carrier RegioJet on its rail service between Bratislava and Komárno, which is subsidized by the state.

Desana Mertinková, railway transport expert and the editor-in-chief of Železničná Doprava magazine, sees bigger discounts for commuters as measure that will likely also increase the customer base.

“This new discount is not bound to a tangible purpose and tangible routes,” Mertinková told the Slovak Radio. “This measure does not have only social but also commercial character.”

The Transport Ministry estimates that the extension of the discount for commuters will cost the state €1.35 million. It hopes that the bigger discount would bring more commuters and higher revenues will help compensate for higher costs.

On the other hand, Martin Vlachynský, an analyst with the non-governmental think tank Institute of Economic and Social Studies (INESS), believes that more discounts will require bigger subsidies from the state budget.

Hospodárske Noviny has calculated that without the rail ‘social package’ ZSSK would close 2014 with a balanced budget, while now it estimates its loss at €7 million. Annual costs of extended free trains for students and pensioners are estimated at €12 million for ZSSK. A similar  €7 million loss is estimated for 2015.

The 50-percent discount is not limited to workers and commuters do not need any special registration to enjoy the higher discount. A rail pass is effective only for those who travel at least three times per week on the same route.

In 2014, rail passes accounted for almost 11 percent of all rail rides registered by ZSSK when it sold 200,000 weekly passes and 100,000 monthly passes. ZSSK registers the biggest interest in rail passes on routes between Bratislava and Trnava, Galanta, Šaľa, Nové Zámky, Malacky, Kúty but also between Žilina and Vrútky and Čadca, from Košice to Kysak and Margecany as well as from Prešov to Košice and Lipany.

A commuter on a 16-km route can save over €250 on a return weekly pass during one year when buying a pass, a €80 more than before this latest change, ZSSK spokeswoman Jana Morháčová told SITA newswire.

When the state launched free rail transport for pensioners and students in November 2014 it was with an eye towards protecting these two vulnerable groups. “For the time being, travelling by train free of charge is simply out of the question for the employed and working,” said Fico as cited by TASR.

The higher discount for commuters arrives after the Fico government extended the group of for students and pensioners eligible for free second-class rail transport as of mid November 2014. It was estimated that as many as 2.5 million people in Slovakia (approximately half of the country’s population) are eligible, as opposed to the 900,000 who originally travelled for free. To respond to higher interest in rail transport, ZSSK added new routes and increased frequency of trains.

For now over 505,000 students and pensioners registered for free rail transport, according to SITA.

In response to a lower interest in bus transport, regional bus operator SAD Žilina cancelled its route between Žilina and Komárno as of February 1.

“The reason of the change is the impact of the launch of free rail transport for students and pensioners when the number of passengers on the route Nitra – Nové Zámky – Komárno decreased significantly since November 2014,” SAD Žilina spokeswoman Ivana Strelcová said as cited by SITA.

Peter Pobeha, general director of SAD Žilina, added that a kind of nostalgia accompanies the cancelation of the Žilina-Komárno route.

“We operated this route for more than 40 years,” said Pobeha. “Long-distance bus transport, contrary to express trains, is not subsidised and when a route gets into the red, it is not possible to operate it any more.”

The passenger transport measures have raised criticism of the opposition and calls for free or cheaper bus transport as people in several regions of Slovakia are thrown exclusively upon bus transport.

“As long as rail and bus transport is not harmonised, we do not have any reason to ponder something similar [for bus transport] during nearest months or years,” said Fico as cited by TASR.