Builders expect an increase in activity

The construction sector will finally recover from the crisis, experts predict. 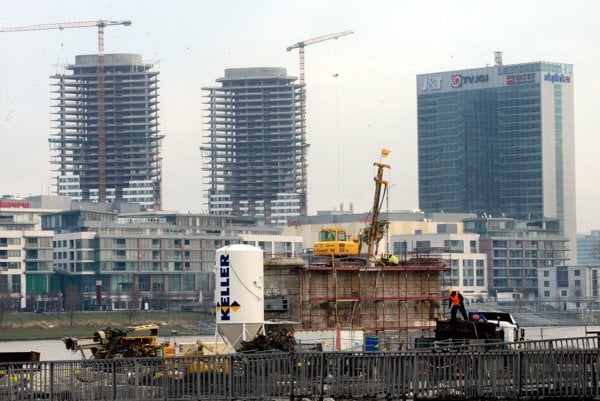 DESPITE some positive expectations for 2014, it seems that the construction sector has not yet recovered from the global economic crisis. Slovakia was the only country in the Visegrad Group (V4) region which did not report growth, according to analysts. The forecasts for this year are, however, positive and it is probable that after six years of struggling the sector will finally grow.

Though construction production rose slightly in November 2014 by 0.6 percent when seasonally adjusted compared to October, in annual terms it dropped by 6.2 percent. For the first 11 months of the last year, production dropped by 3.7 percent y/y, according to the Statistics Office data.

Ranking of firms according to revenues in 2013:

Ľubomír Koršňák, however, analyst with UniCredit Bank in the Czech Republic and Slovakia says that the mood in the construction sector has been gradually improving, also thanks to the expected start of highway constructions and an increasing number of construction permissions in the buildings segment.

“Currently we see problems on the side of offers, but after solving the financial problems of top players in the sector and standardisation of the relations we can expect more substantial revival of construction production,” Koršňák wrote in a memo.

He further stated that the process of standardisation may last several months.
In the end of 2013, the construction sector rose on an annual basis by a considerable 10.1 percent, with some experts seeing it as a sign that it is gradually starting to revive. One of the reasons this did not happen was that although the big construction projects were signed, their launch was postponed.

They were assigned as design & build projects, meaning that they first had to be designed, Jiří Vacek, the director of CEEC Research, a research and analysis firm focusing on development in the construction sector in central and eastern Europe, told The Slovak Spectator.

The Transport Ministry is more cautious about its evaluation of the situation in the construction sector last year, as the data for 2014 are still not complete. The quarter statistics suggest that the segment which represented the construction sector last year was the non-residential orders, Transport Ministry spokesperson Martin Kóňa told The Slovak Spectator.

Compared to other V4 countries, i.e. the Czech Republic, Poland and Hungary, the Slovak construction sector is the only one which did not rise in 2014, Vacek said.

One of the reasons for this is late payments, said Zsolt Lukáč, head of the Association of Construction Entrepreneurs of Slovakia. According to him, this problem is not so enormous abroad.

“The problem in Slovakia is that in many cases it is hard to say whether someone does not want to pay because they cannot and are in secondary insolvency, or they simply do not want to pay and hold the money,” Lukáč told the TA3 news channel.

Also most of the companies which attended the recent survey of CEEC Research said they did not report improvement in payment discipline compared to 2013. The biggest debtors of constructors are private investors, while the main reason for late payments is the lack of money. Late payments threaten the existence of about one fifth of construction companies, the CEEC Research quarter analysis suggests.

The situation in the construction sector should, however, change this year, as suggested by the expectations of construction companies’ directors, Vacek said.

“The sector will rise slightly in 2015,” Vacek added, “companies will be careful about hiring new people, but a few of them confirmed they have already prepared plans to recruit them, due to a higher number of contracted orders. This however concerns a minority of companies.”

Also Lukáč expects the construction sector to rise, as big infrastructure projects financed both from EU funds and the state budget should be launched, as reported by TA3.

According to Vacek, in 2015 it will be the civil engineering, especially the traffic construction, which will represent the whole sector.

Regarding specific plans, the Transport Ministry will accelerate the construction of the cross-country D1 highway sections around Žilina, as well as the roads in the Kysuce region and near Zvolen. It also wants to finalise three highway sections, and a bypass of Martin. It will also continue the project of eliminating security risks on the first class roads and modernisation of railways, Kóňa said.

Moreover, the ministry expects greater expending of money from EU funds allocated for the 2007-2013 period, which the country needs to use by the end of this year.

One of the crucial factors for the construction sector this year will be to ensure that the companies which won competitions will carry them out sufficiently and in time, Vacek stressed. Regarding the new orders, it will be necessary to choose the firms.

“As for the latter, the risk will be possible procrastinations during the selection procedure, but also complaints submitted by unsuccessful bidders, which would delay the launch of construction,” Vacek said.

He added it will also be important to draw as much money from EU funds as possible.

Vacek remains more cautious about private investments. The private sector will follow economic development and its expectations about it.

“If the companies believe they will do well, then they will expand their services and hire [people], or build more production and logistics spaces,” Vacek continued.

Regarding the residential sector, he says that if people believe they have stable jobs and will be able to pay off their loans, they will be more willing to take a mortgage.