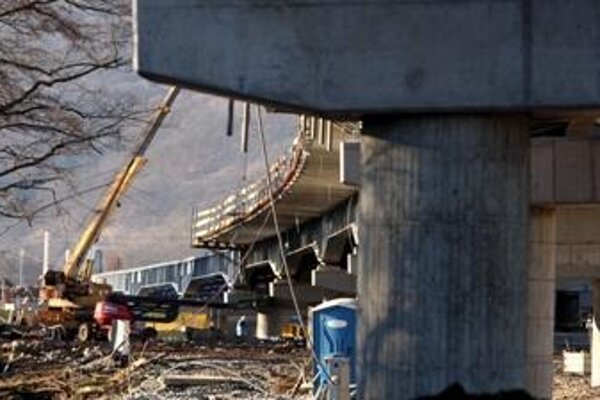 IN 2014 two of the biggest building companies that work on the country’s highways neared bust and started restructuring themselves with the changes likely to have knock-on effects for small to medium sized sub-contractors too.

Overall, building is likely to keep apace as the state wishes to finally connect Bratislava with Košice, the state is preparing schemes for cases where companies that are contracted to complete work are unable to do so.
Doprastav and Váhostav-SK blamed cancelled highway construction projects, losses stemming from low bids and problematic projects abroad for causing their troubles.

“The current legislation enables restructuring and both companies used it,” Jiří Vacek, director of the CEEC Research, told The Slovak Spectator. “Simultaneously this means a hit for a number of companies, which supplied these companies, in good will, with material, products or work, and which may never get all their money back and logically they are dissatisfied with the situation.”

While this may mean the end of existence for some small and medium-sized companies, Vacek expects only a minimal impact on completion of highway stretches under construction.

“The two big companies will continue in the construction and if nothing unexpected happens, they also will complete these stretches,” said Vacek.

The first company which ran into trouble last year was Doprastav. It asked courts for restructuring in the first half of 2014. It ascribes its problems to cancelled construction projects and debts which its clients owe to them in Slovakia as well as abroad.

In 2010 the government abolished a concession contract under which Doprastav along with Váhostav-SK and other companies in an international consortium were to design, build and operate 75 kilometres of the D1 highway. Doprastav invested almost €10 million into this project and it paid out €3 million in severance payments to 1,247 workers it laid off when it was cancelled, Michal Krajčír, spokesman of Doprastav, told The Slovak Spectator.

Doprastav also insists the Polish investing institution Generalna Dyrekcja Dróg Krajowych i Autostrad owes them €50 million. It is now up to the court to decide.
Moreover, Doprastav reports a total of €42.7 million which its clients have not paid it for completed projects.

It continues to compete for tenders for other large construction projects hoping to succeed while it has already won a tender, in consortium with Strabag, Eurovia SK and ZIPP, to increase safety on the 45-km long stretch of the D1 highway between Ivachnová and Važec, the Sme daily wrote.

In the second half of 2014 Váhostav-SK also struggled. The company also lists among problems the cancelled PPP project as well as winning highway projects with bids that were lower than costs.

By offering such low prices companies hoped to remain afloat and keep their labour force and planned to fill the gap from other, profitable projects.

While creditors supported restructuring of Váhostav-SK on January 2, it is still not clear yet, in what amount and when old obligations of the company would be settled, Tomáš Halán, spokesman of Váhostav-SK, told The Slovak Spectator. The company owes to banks €26.4 million and recognised obligations to suppliers amount to €92.3 million.

Váhostav-SK with companies in consortiums is working on six sections of highways and dual carriageways. These include delayed stretches of highway D1 Dubná Skala – Turany and Jánovce – Jablonové that mainly induced the poor financial status of the company.

“With regards to the restructuring process Váhostav-SK plans to properly complete the agreed-upon projects,” said Halán. “Simultaneously the company will compete for new orders.”

The Ministry of Transport, Construction and Regional Development ascribes troubles of Doprastav and Váhostav-SK to bad political decisions.

“Problems of large construction companies joined into infrastructure projects are consequences of erroneous political decisions when even some political parties had made from cheap prices political marketing,” ministry spokesman Martin Kóňa told The Slovak Spectator, adding that they did not deal with the question of whether these prices are realistic.

Halán added that problems of his company were multiplied due to abolition of highways construction via PPP projects and thus lack of key contracts that should refinance losses from previous projects.

The National Highway Company (NDS), the highway construction investor, has been working on a mechanism addressing cases where existing contracted firms may be unable to complete the project. It is based on signing framework contracts for completion and remedial works on highways and dual carriageways under which a new builder would resume construction as soon as possible.
“The purpose of the proposed measure is to ensure continuity in construction and prevention of damage threatened by the halt of construction work,” Michal Fúrik, spokesman of NDS, told The Slovak Spectator.

However, Fúrik points out that all road construction projects are co-financed by the European Union and therefore also all mechanisms consisting in change of the initial contractor must be fully harmonised with procedures required under the EU fund drawing system.

There are also efforts to increase protection of small creditors. The opposition Most-Híd party has re-submitted an amendment to the law on bankruptcy and restructuring strengthening the position of small companies within restructuring proceedings while parliament is dealing with it at the session which started on January 27.

The Justice Ministry has prepared a revision to the Commercial Code and the bankruptcy law, whose aim was to prevent damaging creditors and increase rights of creditors also in restructuring proceedings, Justice Ministry spokeswoman Alexandra Donevová told The Slovak Spectator. However, President Andrej Kiska returned the amendment to parliament. The ministry plans to re-submit the amendment as soon as it is possible, Donevová said.

“It is of key importance for the Justice Ministry that also small and medium-sized creditors can affect the content of the restructuring plan and that this is not only an agreement of the debtor under restructuring with main creditors, mostly banks,” said Donevová. “This was one of the measures in the amendment.”