THE EUROPEAN Commission has okayed €63 million from the EU’s Cohesion Fund towards the rebuilding of Bratislava’s Old Bridge and the construction of a tram line to the borough of Petržalka. 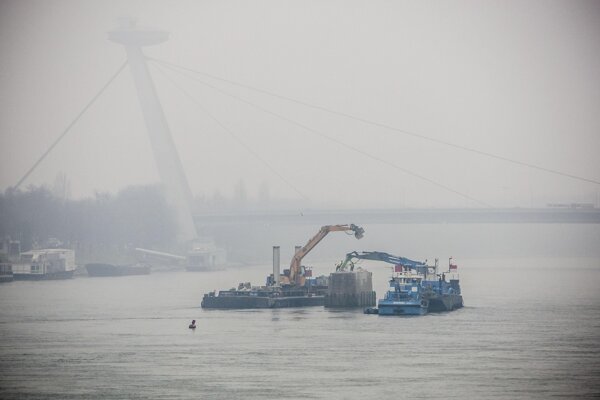 However, the funding is conditional based on completing the work by the end of this year. The project is behind schedule by 10 weeks as of now, due to a search for mines, uncooperative weather and accidents, according to the Transport, Construction and Regional Development Ministry.
“The Old Bridge needs to be done by December of this year, by which time the city of Bratislava is entitled to the money approved,” Transport Minister Ján Počiatek told the TASR newswire on January 22. “I’m therefore urging the investor and the contractor to engage all their capacities so that the project is completed in time.”

The bridge was inspected by the mayor of Bratislava Ivo Nesrovnal on January 15. The project being well behind schedule, Nesrovnal instructed the contractor to work on the project round-the-clock beginning in March. Should the venture fail to be completed by the end of 2015, Bratislava City Hall runs the risk of losing out on the EU funds towards the project.

The construction, launched in December 2013, was lagging behind not only due to mines found on the bed of the Danube River, but also due to the fact that during the Christmas period, workers had three weeks off which the mayor called irresponsible due to time pressure. Nesrovnal also added that there will be a construction supervisor constantly present from March, to ensure that the works are completed in line with the schedule.
From March, the bridge will also be completed from two points – not just from the Old Town bank, but also from Petržalka. The parts for the construction are gradually tailor-made in the ironworks in Vítkovice, the Czech Republic, to be then assembled in Bratislava. The first metres of the Old Bridge should be built over the Danube beginning in February; while the last parts shall be transported from Vítkovice as of mid-2015.
The Eurovia SK company will carry out the construction works for €58.8 million without VAT – which was the lowest bid, according to TASR – of which the EU will finance 85 percent, the Slovak government 10 percent and the city 5 percent.

However, if the deadline is exceeded, the EU would not refinance the construction “which would be a financial disaster for Bratislava”, according to Nesrovnal.

“But the speed depends also on climatic conditions,” Lenka Kubejová of Eurovia SK said. “They can limit us in certain types of work.”