Gorilla file appears to be authentic

AFTER three years of investigating the Gorilla file police believe it is an authentic document of the Slovak Intelligence Service (SIS), and Prime Minister Robert Fico looks set to face questioning as part of the ongoing inquiry. 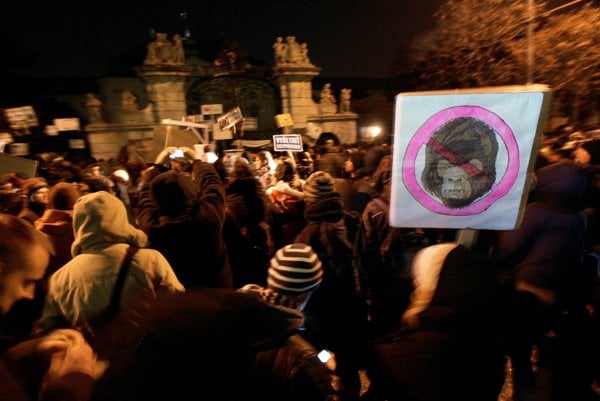 The Gorilla file has caused many protests in Slovakia. (Source: Sme)
Font size:A-|A+0

“The authenticity has been confirmed to a considerable extent,” head of the special investigation team Marek Gajdoš told the Sme daily on February 2. “Due to the protection of classified information it is not possible to further elaborate on the matter.”

The case concerns an alleged corruption scandal that was leaked on the internet and to media in late December 2011. The Gorilla document was reportedly made by the SIS describing its operations which sought to collect information on the Penta financial group’s influence on senior Slovak politicians between 2005 and 2006. The wiretapping took place between November 2010 and January 2011.

The authenticity of the Gorilla file is still being investigated, while no senior official or top businessman has been prosecuted, Sme wrote.

The investigation has so far not confirmed the information from the Gorilla file, said Martin Škubla, a lawyer for Penta’s Jaroslav Haščák , who is specifically named in the file.

“It is a very striking statement unworthy of an investigator who honours the law,” Škubla said, as quoted by Sme.

The SIS refuses to debate declassifying the file.

“As the investigation is still running SIS can’t comment, as to not affect investigation or even mar it,” SIS spokesman Branislav Zvara told Sme.

Gajdoš said police plan to question Prime Minister Robert Fico as they wish to end the investigation during this year.

After a long time of silence he couldfinally respond to the question of whether he met Haščák in the wiretapped apartment described in the Gorilla file, Sme wrote.

Unlike accused, during interrogation witnesses have to speak truth. They can reject to answer police questions only if it would lead to prosecution of themselves or their close persons, Sme wrote.

The exact date of the questioning remains unknown. Police investigate suspicions of criminal acts and the Gorilla file does not imply that Fico a committed crime, according to Gajdoš.
In the Gorilla file, Fico allegedly spoke with Haščák about politics before the 2006 parliamentary elections. The file implies also suspicion of shady funding of his Smer party related to Fico’s personal secretary, František Határ, who died in December 2013.

“We did not manage to interrogate Mr Határ,” Gajdoš told Sme. “The investigation was focused on more serious suspicions.”

In her reaction Police Director Office spokeswoman Marianna Paulíková said that Gajdoš is giving a personal explanation of the current investigation.

Security analyst Milan Žitný considers Gajdoš’s statements as strange, because heads of investigation teams are not meant to comment on open investigations.

“An investigator never, I repeat, never does it,” Žitný told the Pravda daily.

Žitný added that an observing prosecutor should make such comments, not the investigator. The fact that Gajdoš did it is probably the result of the police desire to distract the public from focusing on other cases, said Žitný without specifying which ones. Police should recall Gajdoš from his post, he said.

“The observing prosecutor should act strictly and without compromises,” Žitný said, as quoted by Pravda. “The fact that the investigator made such statements is so strange that there is some political issue behind it for sure.”

These were not the first statements by Gajdoš which shed light on ongoing investigation. In a January 2 interview with the Aktualne.sk news website he said that quite a large amount of information and facts from the Gorilla case have been confirmed.

He added that despite the fact that three years have already passed since the special team to investigate the case was set up, it continues to work intensively.

Gajdoš further stated that in relation to the case, investigators have already questioned Haščák and former executive committee chair of the National Property Fund Anna Bubeníková who was also mentioned in file.

He also stated that the change in government in 2012 did not have any influence on the work and approach of the investigation team.

“I do not feel any considerable lack of support or placement of obstacles, either,” Gajdoš said, as quoted by TASR.