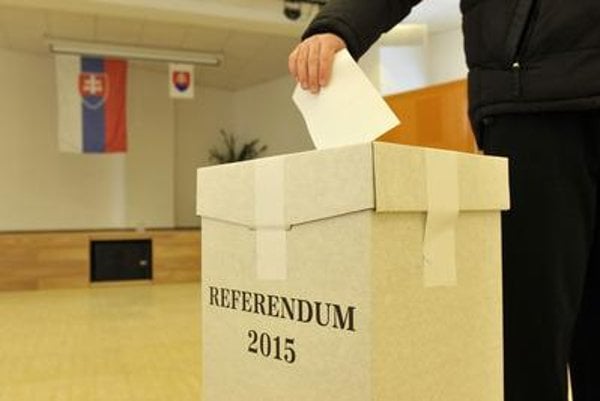 ALMOST 1 million people cast their ballot in the February 7 referendum which, as its initiators say, sought the protection of family. The turnout, however, failed to surpass the required 50-percent quorum as only 21.41 percent of eligible voters went to the polling stations. It was the third lowest of the eight referendums already held in Slovakia and surprised analysts as pre-referendum polls suggested that about 35 percent would attend the voting.

Despite the failed vote, both the referendum’s organisers and representatives of the LGBTI community consider the results a success and claim they want to continue with the discussion it has opened.

“For me, as a sociologist, the turnout is really surprisingly low,” Martin Slosiarik of the Focus polling agency told the public-service Slovak Radio (SRo), adding that a pre-referendum poll Focus conducted for the Sme daily suggested the most pessimistic variant for turnout at about 30 percent.

Of more than 4.4 million eligible voters, only 944,674 people came to cast their ballot. The highest turnout was in Prešov Region (32.31 percent), while the lowest was in Banská Bystrica Region (15.84 percent).

As for the districts, the highest turnout was in Námestovo (51.82 percent) which was the only one where it surpassed 50 percent. The least voters attended the referendum in Dunajská Streda (7.64 percent), the results suggest.

One of the reasons for this might be the overall perception of the campaign led by the Alliance for Family (AZR), the organiser of the referendum. Even conservative voters seemed not to believe that the topics discussed before the referendum were something they could identify with and which would motivate them to attend the referendum, Slosiarik said.

“There is a question whether the support of the church or the pastoral letter read in churches on Sunday was the way to boost mobilisation and whether some people did not stay at home because of the way in which the church intervened into this political topic,” Slosiarik told SRo.

Anton Chromík of the AZR, however, does not consider the turnout low. Almost 1 million people is “a great number, it resembles the election result of Smer” and every party would be happy about such an outcome, he told Sme.

“The fact is that we are civic activists who have no paid staff and despite this people rose and came,” Chromík said, as quoted by Sme. “It is a nice basis on which we can continue to build.”

The referendum results have busted several myths which existed in Slovak society, according to Martin Macko of the Initiative Inakosť, a civic association advocating rights of the lesbian, gay, bisexual, transsexual and intersexual people.

“From our point of view Slovakia is prepared for specific solutions,” Macko told SRo.

The referendum also showed that people consider the family important, but that they do not see the same-sex families as a threat to traditional families, he added.

From the point of view of a person who evaluates equality and human rights as the most important thing, the referendum ended up very successfully, activist Hana Fábry told the TASR newswire. She said she was not tense when the quorum was counted.

“I was sure that half of Slovakia would not decide in a referendum that one part of Slovakia is bad,” she summed up.

According to the Conference of Bishops of Slovakia (KBS), the fact that the turnout failed to surpass 50 percent quorum is a reason for analysis and reflection.

“We repeatedly encourage mutual respect towards all people and specific aid to families in our neighbourhood,” KBS wrote in an official statement. “We believe that the care for families will remain an important topic for public life and for our whole society.”

Politicians responded to the referendum outcome mostly according to their party affiliation. PM Robert Fico said that his Smer party respects the voters who attended the referendum and also those who did not come “and does not have a reason to comment on this civic initiative”, as reported by the TASR newswire.

According to the Christian Democratic Movement (KDH), the image of the campaign in several media outlets distracted people from attending the referendum. Its chair Ján Figeľ also thanked people for attending the voting and stressed that the effort of the party for a pro-family environment has not started or ended with the referendum, TASR wrote.

The liberal Freedom and Solidarity (SaS) considers the results a loss for its organisers. They also commented that there is time to open the agreements between Slovakia and the Vatican and for the systematic separation of church and state, TASR reported.

The Most-Híd party reacted that it respects the result and hopes that a greater level of tolerance, mutual respect and understanding will prevail among Slovak citizens after the February 7 vote, as reported by the SITA newswire.

The Slovak Democratic and Christian Union (SDKÚ) said that the reason for the low turnout at the referendum was the circumstances and the course of the campaign. According to the party’s chair Pavol Frešo, it is neither the victory nor the loss of supporters or critics. Though the referendum is invalid, it does not mean it is useless if it is evaluated well, he added, according to SITA.

According to President Andrej Kiska, people practiced their constitutional right and organised this referendum.

“I feel sadness and disappointment about what the referendum has brought to our country,” Kiska said, as quoted by TASR. He refused to comment on the referendum, adding he would say more on February 9.

As for the questions, the biggest support went to the first question concerning the limited use of the word “marriage” only when referring to the union of a man and a woman. As much as 94.50 percent of those who attended the voting said “Yes” to the question, while 4.13 percent opposed it.

The second question seeking to ban adoption for same-sex couples was approved by 92.43 percent of voters, while 5.54 percent answered “No”.

The third question to allow parents to opt their children out of school classes dealing with sex education or euthanasia was supported by 90.32 percent of voters, while 7.34 percent opposed it.

Chromík of the AZR considers the referendum successful, as 90 percent of people expressed what they think about family and marriage.

“It is also successful because of the debate it has opened,” Chromík told Sme. “There has not been such discussion for a long time and we brought it back. We opened this topic and will continue in it.”

Also human rights activists consider the referendum a beginning for discussion. According to Lenka Machlicová of Amnesty International Slovensko, a human rights watchdog, people here do care that everyone has equal rights as the right to family and the right to adopt children, as reported by SITA.

Chromík told the press shortly after the unofficial results were presented that they will not transform into a political party.

“We are and will remain civic activists because we really need to show politicians what people wish and desire,” Chromík said.

As for their next steps, he said they will try to make family the centre of all policies, so they take the family and marriage into consideration.

“Our aim is to perceive the marriage as the best environment for children,” Chromík said. “So the children get love from both father and mother and the state respects this need of children and prefer it to the requirements of adults.”

From Macko’s point of view, Slovakia is prepared to adopt specific solutions for LGBTI people. There have been several proposals regarding this issue, some of which have already been discussed in parliament, he told SRo.

“It is only the question of political will whether something will be adopted,” Macko said.

As for the specific agenda they want to discuss, Macko reminded of the amendment to the constitution adopted last year which contained the new definition of marriage as a unique bond between a man and a woman, which means that there is no space to change this in the near future.

“Therefore the only feasible alternative for us is the adoption of the law on registered partnership,” Macko told SRo.