Tourism numbers were down in 2014

DESPITE fewer tourists visiting destinations in Slovakia in 2014, tourism organisations continue to try and lure them in. Services are improving, but there are still deficiencies to remove. 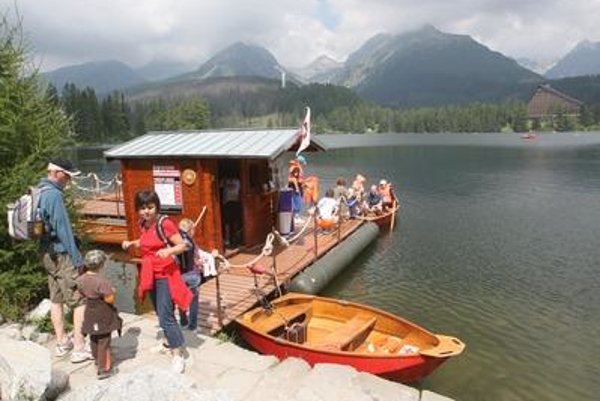 Together 2,885,305 tourists spent their holidays in Slovakia during the first nine months of 2014, down by about 9 percent compared to the same period in 2013. The number dropped both regarding the foreign and domestic tourists. They spent approximately three nights in individual destinations, the data provided by the Statistics Office suggest.

“One of the reasons [for the drop] is the strengthening of the euro against the currencies of neighbouring countries which increased the price of holidays for potential visitors to Slovakia, so they opted for other destinations,” Martin Šebesta, spokesman for the Slovak Tourist Board (SACR), told The Slovak Spectator.

The season was also affected by the conflict between Ukraine and Russia, and subsequent sanctions against Russia, as well as weak winter and summer seasons, and shorter stays, Šebesta added.

“We are glad, however, that the number of tourists to Slovakia is increasing on a long-term basis,” Transport Ministry spokesman Martin Kóňa told The Slovak Spectator, “and that despite the [low] number of visitors to Slovakia in the beginning of last year we noted an increase in incomes from foreign tourists during the first nine months of 2014.”

According to the data from the National Bank of Slovakia, they increased by 1.6 percent year-on-year to €1.476 billion, Kóňa said.

Foreign tourists coming to Slovakia visit mostly three regions: Bratislava, Žilina and Prešov. Among the popular destinations are the cities of Bratislava and Košice, and also sites in the Poprad, Liptovský Mikuláš, Žilina and Piešťany districts, statistics show.

While in the past the foreign tourists preferred mostly Bratislava and the High Tatras, in the past years they also discovered Košice, mostly thanks to the title of the European Capital of Culture (ECOC) in 2013 and also better transport connection, and the Liptov region, thanks to extensive investments into infrastructure and services, Šebesta said.

Nearly 60 percent of visitors to the High Tatras come from Slovakia. As for the foreign tourists, the most come from Poland, the Czech Republic, eastern Europe and the Baltic countries, Lenka Maťašovská, executive director of the High Tatras Region destination management organisation, told The Slovak Spectator. The most popular destinations are Hrebienok, Štrbské Pleso and Skalnaté Pleso lakes, she added.

The number of tourists visiting Košice Region increased in 2013 by about 10 percent compared to the previous year, both in domestic and foreign tourists, coming mostly from Austria and Germany, Miroslava Šeregová Hnatková, spokeswoman for Košice Region Tourism, told The Slovak Spectator.

Among the popular destinations is the city of Košice, the National Park Slovenský Raj (Slovak Paradise), the caves inscribed in the UNESCO list and also the Spiš Castle, the biggest castle complex in central Europe. Visitors also like the Tokaj wine region where they can taste wines in mediaeval cellars, Šeregová Hnatková said.

While the destination preferences of tourists have not changed, their requirements of the whole system as well as level and quality of offered services has, Kóňa said. One of the current trends is, for example, shorter stays, though there are more of them during the year. The guests also seekout complex packages of services and the need for innovations in services, like various applications, websites, or using panoramic cameras, he added.

In order to lure more tourists to visit Slovakia, SACR uses various methods, including advertising campaigns in various types of media, which are presented not only in Slovakia, but also abroad. Moreover, it attends various tourism fairs in Slovakia, and also across Europe and overseas, where it presents the country and the possibilities it offers. This includes the Ferien Messe in Vienna, Matka in Helsinki, CMT in Stuttgart, New York Times Travel Show, FITUR Madrid, as well as ITF Bratislava, Šebesta said.

“The visitors are the most interested in possibilities of summer hiking and cycling in the mountains, visits of UNESCO monuments, spas, aquaparks, and also weekend visits to towns,” SACR head Marta Kučerová said, as quoted in the organisation’s press release.

She added that the quality promotion of Slovakia and the services visitors can use will contribute to increase in tourism, which will not only improve the economy, but “also the awareness about Slovakia as attractive tourist destination in the world”.

Tourism also benefits from building the infrastructure and increase in the number of airlines to Slovakia, Šebesta said. Maťašovská also mentioned that many accommodation facilities underwent reconstruction and modernisation. Moreover, those active in tourism focus on gastronomy and even hire people who can speak foreign languages.

Though the promotion of Slovakia improved, also thanks to the creation of district and regional tourism organisations (so-called destination management), there are still some deficiencies in infrastructure, like missing cycling routes, stagnation of recreation centres which lack the finances for reconstruction, Šeregová Hnatková said.

Šebesta pointed to some imperfections regarding the staff which encounters visitors.

“What is often missing is an ordinary smile or friendly greeting which cost nothing, but can do more than the best equipment in rooms or wellness centres,” he said, adding that the typical Slovak generosity does not reflect in services for tourists.

Šeregová Hnatková says that though Slovakia does not have as extended and quality services as can be found abroad, it is the challenge to improve the offer rather then the obstacle to development. Moreover, tourists now focus on what they can see and experience in the visited destination.

“We are the country of many stories and traditions, and we want to build our offer on this uniqueness,” Šeregová Hnatková said.