Fico: Slovakia ready to supply more gas to Ukraine, but no arms 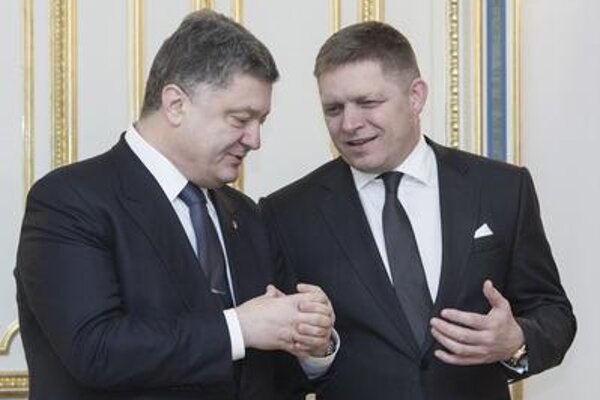 “We’ll boost the volume from 11.5 billion cubic metres of gas per year to over 14.5 billion cubic metres per year,” the Slovak PM said, as quoted by the TASR newswire. “This practically brings us to one-third of your domestic consumption.” He added that both countries must do their utmost to preserve their character of “transit countries”, as Slovakia would lose out on hundreds of millions of euros in fees if it were to be bypassed as a gas transit country.

Slovakia launched the reverse gas flow to Ukraine on September 2. Fico went on to urge paying more heed to economic relations between Slovak and Ukrainian companies and asked Poroshenko for support of the business forum due in eastern Slovakia on April 20-23. At least 200 Ukrainian businessmen and some 140 Slovak peers are expected to attend the event.

The Slovak government provided Ukraine with material humanitarian aid in the form of symbolic cheques on the same day. The cheques were personally accepted by president of the Ukrainian Red Cross Ivan Usicenko and Leonid Golopatyuk, Acting Deputy Minister of Defence of Ukraine for European Integration. Last year’s aid amounted to approximately €900,000. “If the situation requires, we will consider additional aid,” Fico said.

Slovakia has sent to Ukraine six fully loaded lorries carrying material worth approximately €700,000. Part of the aid, coordinated by the Ministry of Foreign and European Affairs, involved medical supplies and new clothes – including clothes for children and medicine; the Ukrainian Red Cross has received aid in form of pharmaceuticals.

The Slovak Government views the Minsk Agreement as a basis for resolving the conflict in eastern Ukraine, Fico said following a meeting with his Ukrainian counterpart Arseniy Yatsenyuk in Kiev on February 6. The Slovak PM welcomed the latest initiative of German Chancellor Angela Merkel and French President Francois Hollande on resolving the conflict as presented on Thursday in Kiev and on Friday in Moscow.

When asked whether Slovakia will provide arms to Ukraine in line with Poroshenko’s request presented to NATO countries this week, Fico said – as quoted by TASR – that if Ukraine needs help, Slovakia will provide it with humanitarian aid. The Slovak government rejects a military solution of its eastern neighbour and will not supply, under any circumstances, weapons to Ukraine. Fico said this for the SITA newswire in a telephone call. “The only thing we can provide is humanitarian assistance and information from our transformation and post-transformation process; we are prepared to offer scholarships to students but a military conflict simply cannot be ended successfully,” the Slovak PM said, adding that if weapons were purchased, the conflict would deepen.

Yatsenyuk stressed that peace in Europe depends on peace in Ukraine. This can only be achieved if Ukraine defends itself, however, he said, rejecting an ordinary military solution to the armed conflict in Donbas.

Two intergovernmental treaties between Slovakia and Ukraine were signed during Fico’s visit – one concerning border crossings and the other rail transport through the borders. According to Yatsenyuk, these treaties will simplify cross-border cooperation between the two countries.

Fico said that he continues to believe that a joint session of the governments of Ukraine and Slovakia will take place in eastern Slovakia in line with the original plan. At Kiev’s request, the original plan had been changed to the February 6 official visit of Fico, Lajčák and Pavlis to Kiev.