Three years after the Gorilla file was published, right-wing politicians continue to prove they aren’t ready to govern. 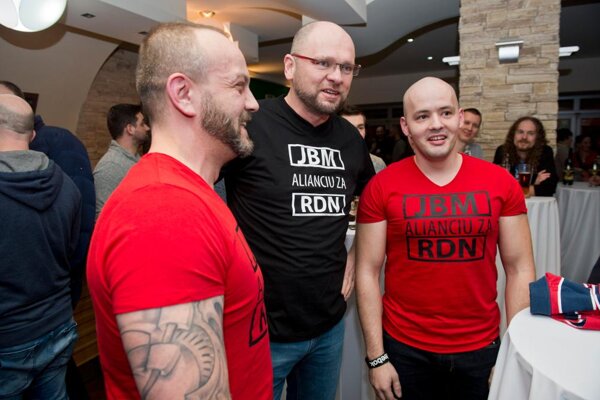 Despite everything, I like SaS party leader Richard Sulík for his unerring talent for the faux pas. Just as I appreciate Rado Procházka of Sieť for the nakedness of his ambition, opposition MP Ivan Mikloš for his erudition and even, occasionally, Christian Democrats boss Ján Figeľ for his sepulchral probity. But I don’t believe they are ready to return to government, because they clearly haven’t learned anything from the Gorilla scandal that obliterated their government in 2012 elections. Such as: humility.

Case in point was the T-shirt Sulík was photographed wearing on Saturday night, which bore the logo „JBM Alianciu za RDN“ (loosely translated as “FCK the Family Alliance”). For connoisseurs of bad taste, this was a true meisterstück, failing on several levels at once:

I know Sulik didn’t mean it this way, and only intended to insult the earnest clods at the Christian fundamentalist Family Alliance. But let’s consider his FCKIT for a second, and the context in which it was uttered (worn).

High-level corruption (i.e. organized crime) has been widespread in this country for so long that it’s become like background noise: after a while, we stop noticing it, and take it as part of the landscape. Which in turn allows corruption to thrive and to reproduce – every month a new revelation, a new denial, another “investigation” – and then we move on to the next scandal. It’s sleep-inducing.

Imagine, then, that we could pile up all the political scandals of the past two decades and relive them in a single moment. Imagine the anger, disillusion, frustration and sadness, and imagine them experienced all at once rather than doled out over 20 years. Imagine the howl of emotion that would arise from this land, the anguish at what might have been, at what was possible once but is so no more.

And then imagine a leader of a national political party being photographed, smirking, in a FCKIT T-shirt.

I haven’t taken a poll, but I’m pretty sure most people in this country are fed up with FCKIT as the standard political response to everything but the prospect of more power and money. We’re all in favor of free speech, and everyone knows Sulik has a talent for gaucherie – but perhaps our leaders could refrain from actually advertising their fondness for FCKIT.

Even as a joke – it’s still too soon.