LAST week’s case in which family of a deceased patient accused heart surgeon Viliam Fischer of accepting a bribe has re-opened debate about corruption in health care. 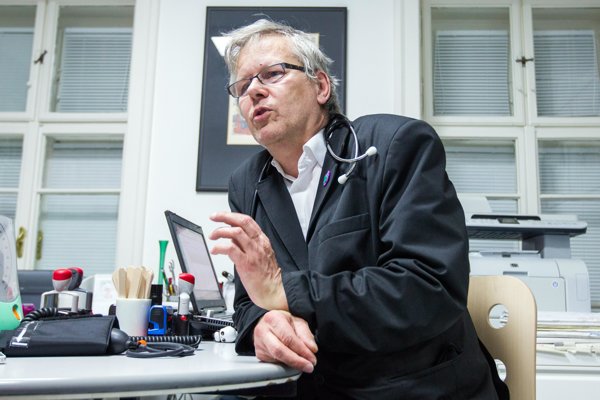 After noted Bratislava-based general practitioner Peter Lipták, who also led the Slovak Society of General Practice (SSVPL) in the past, publicly commented on the issue now he too is facing a police investigation.

On February 9, Lipták told the private TV channel Markíza that he normally accepts gifts from patients, specifying that he may receive up to €5,000 a year in this way. Lipták said that it is something around €20 a day and that he perceives it as “payment for additional financing”, as the current system of payments through health insurers does not work.

“If someone does not have [the resources] for that – they have simply bad luck,” said Lipták, who has a private consulting room in downtown Bratislava. He had openly described this in 2013, though his words went unnoticed at the time. However, immediately after the recent TV broadcast Prosecutor General Jaromír Čižnár ordered to check on Lipták’s words, “as they implied suspicion of corrupt behaviour”, Prosecutor General Office’s spokeswoman Andrea Predajňová said.

NOVA, Ordinary People and Independent Personalities (OĽaNO) and Freedom and Solidarity (SaS) parties on February 10 announced at a joint press conference that they are about to file a criminal complaint for taking bribes against Lipták. The Health Ministry, the presidium of Slovak Medical Chamber (SLK) and the SSVPL also condemned Lipták.

Health Policy Institute analyst Tomáš Szálay told the Sme daily that Lipták just told the truth about Slovak health care. However, he called Lipták’s solutions “naïve” and added that “the private additional financing cannot be spontaneous and unrestrained because then some people will really have bad luck”.

Also Dušan Zachar of the INEKO think-tank deems the poorly set rules the main problem in this case.

In an interview for Sme, Lipták explained his words for TV Markíza, adding that his comments were edited. “I said that people who have to be treated in a system lacking money and which is not able to offer them what they need have bad luck,” Lipták said, adding that he does not ask money from people, but when they want to donate, he accepts the money, registering it in a transparent system of evidence.

The gifts are usually small payments, usually €10 or less, but also book, paintings, or vases. The money amounts to about €5,000 a year, Lipták admitted. He does not report it in his tax return, though.

“This would work if I was a legal person, but I receive it as a natural person,” he opined.

Lipták also added that he sees gifts as a means to pay the rental of his consulting room and the new equipment and furnishing he had to buy. The doctor also refuses regular official payments from patients, for earlier visits without long waiting times, for example. Lipták said he gets about €5,000 a month from health insurer, of which €2,000 goes repay a loan used to buy equipment, €1,000 for rental and energy, and €1,200 to a nurse, with some small amount also going to medical supplies.

Doctors, if they feel their remuneration is insufficient, take fees, gifts of bribes from their clients, doctor and lawyer Peter Kováč told Sme. Gifts are a voluntary donation, unlike fees that are paid obligatorily. A bribe is given to the doctor to do – or not do – something. Miroslav Šmál of the Finance Ministry said that a doctor has to report gifts as part of income in their tax return.

Editorial Note: Peter Lipták is the husband of The Slovak Spectator staff writer.