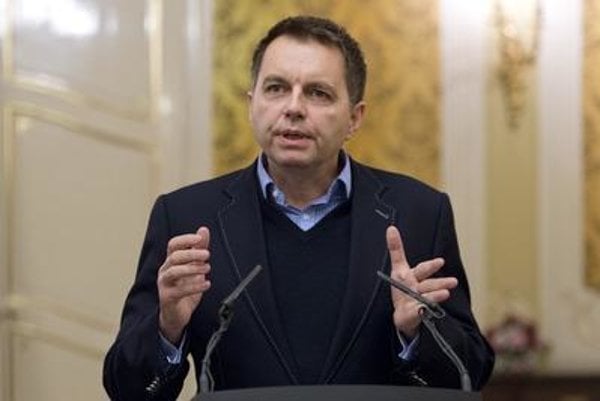 EUROZONE finance ministers were set to meet on February 20 to discuss a Greek proposal to extend their loan with a six-month assistance package. However, just as The Slovak Spectator went to press, the German government rejected the Greek request, BBC News reported. It was unclear if the plan would be discussed any further at the Friday meeting.

Prior to the German rejection, it had seemed the plan included significant concessions by the Greeks and that it would fall in line with the position Slovak Finance Minister Peter Kažimír expressed in recent days.

“Ministers of the euro area member countries are ready to meet and to continue talks with Greece,” he told the TASR newswire on February 17. “It is possible that the meeting may be on Friday [February 20] on condition that we have a great chance to tighten negotiations and reach an agreement.”

Dutch Finance Minister Jeroen Dijsselbloem, the current chairman of the Eurogroup, confirmed via Twitter that the ministers would convene in Brussels. The Greek government, now lead by the leftist Syriza coalition, hopes to use the six-month period to further renegotiate the terms of the overall bailout. On February 16 Greek leaders rejected extending the earlier €240-billion bailout on the same conditions. Without some deal, the Greeks risk running out of cash as the existing EU-IMF bailout programme expires. Most believe the Greek government would run out of cash by the end of March without some sort of additional injection of funds.

“The approach in the Eurogroup was very clear, that the most realistic way forward is extension of the current programme,” European Commissioner Valdis Dombrovskis, who oversees the eurozone, told reporters on February 18.

Earlier this week Slovak MEP Richard Sulík, chairman of the Freedom and Solidarity (SaS), called for Greece to leave the 19 country eurozone. “We must now bite the bullet,” he told TASR on February 17.

However, the Greek request for the six month extension looked like a significant retreat from its earlier positions and looked likely to lead to a deal that would keep the country in the currency union.

Reuters reported that Greek Prime Minister Alexis Tsipras and his government have pledged to continue making debt payments to all creditors during the six month period, as well as maintain a fiscal balance. They also said they would allow monitors from the European Commission, European Central Bank and International Monetary Fund to track the implementation of the agreement, something they had previously refused to do.

Speaking to a group of party loyalists on February 18, German Chancellor Angela Merkel signalled that her country, which often forms the backbone of eurozone policy, would continue walking a fine line during negotiations with the Greeks.

“If countries are in trouble, we show solidarity,” she said, as quoted by Reuters. “Solidarity is not a one-way street. Solidarity and efforts by the countries themselves are two sides of the same coin. And this won’t change.”

Earlier this month Fico sent mixed messages on his position. He appeared to say that any plans to forgive Greek debt would need to be put as a referendum to the Slovak public. In the very same statement he also seemed to admit that if the Eurogroup agreed to forgive some of the Greek debt that Slovakia would go along with it.

“If they [Brussels] pressured us into this, a referendum would need to be held and people speak their mind,” Fico said on February 11, as quoted by TASR. “If they ignored the referendum and declared that they don’t care, then the government would okay forgiving the Greeks the money. However, I don’t see any reason whatsoever why Slovakia – with our (low) salaries and pensions – should give money to someone directly.”

Just a few days later, he told Slovak state television he referred to the situation as “their problem”, referring to the Greeks. “They have to resolve it by themselves,” he said.

Greek government debt in comparison to GDP has increased, from 120 percent of annual GDP to 175 percent, since the eurozone bailout programme began. The Greek economy has contracted each of the past four years, including by a massive 8.9 percent in 2011. Tsipras and Syriza won the January election amid pledges to change bailout terms and return the country to growth.