TAX revenues are developing in Slovakia in a more positively than the Finance Ministry predicted even though the deflation reduced the final, additional, sum the Robert Fico government will have at its disposal. 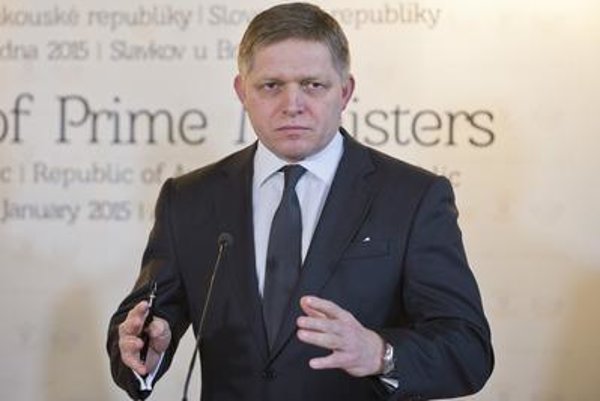 The money will go toward the so-called second social package.

“Thanks to effective fight against tax evasion, thanks to effective tax collection system, better collection of corporate tax and income tax we have today at disposal finances which not only enable to replace €200 million that we are loosing on [negative] inflation, but simultaneously we have extra package of finances which we are prepared to use for the second social package to increase standards of living,” Prime Minister Robert Fico said when the Finance Ministry introduced the updated forecast on February 13.

Finance Minister Peter Kažimír said that the low or zero inflation is a nuisance for the state costing it about €200 million, but that consumers benefit from it.

“This means for people that they save on shopping because at least one half of this €200 million is related to consumer behaviour and retail trade,” Kažimír said for the V politike (In Politics) TV show of the news-only TA3 channel on February 15. “This means that people and their families … will save this year some hundreds of euros on ordinary shoppings, energies, housing, food and other products compared with the previous year.”

Kažimír sees better tax collection mainly due to an improvement in VAT collection and higher profits for companies.

IFP also improved estimate of the effective tax rate especially in case of VAT and corporate tax. While Slovakia’s VAT rate is 20 percent, the IFP governmental think tank calculated the effective VAT rate for 2012 at 12.5 percent. In 2013, it was 13.2 percent and it is expected to increase further.

“We are approaching 15 percent,” Kažimír said “We are actually at the level of 2008 of the pre-crisis period and we want, of course, to continue in this.”

One of measures improving VAT collection is the electronic VAT ledger statement.

“Effectiveness of VAT collection really improves,” Juraj Valachy, Tatra Banka analyst told the Pravda daily. “It is important that the improvement has been happening continually since the end of 2012 and it is possible to assume that the new VAT ledger statement will continue to improve the effectiveness.”

The Finance Ministry in its up-dated tax prognosis also estimates that as much as 85,409 people would leave the second, private, pension pillar and return to the first, pay-as-you-go pillar. This means that they will take with them also savings of €312 million. The pillar will open on March 15 and savers will have three months to leave or, for those who are out of it, to opt in.

The National Bank of Slovakia evaluates the IFP forecast as realistic when given macro-economic preconditions and legislative measures are taking into consideration. It perceives uncertainty in the estimate of the number of savers, who would decide to leave and enter the second pillar.

Banks perceive the updated forecast as realistic, too.

“We consider the tax forecast of the Finance Ministry as realistic; we see upward and downward risks as balanced,” Slovenská Sporiteľňa wrote.

On the other hand, the opposition perceives the estimates to result from accounting tricks.

“[The government] is managing to reduce VAT evasion, but only because they increased annoyingly during the first year of the current government,” said Miloš Moravčík, vice-chairman of the Christian-Democratic Movement (KDH) when responding to the updated forecast as cited by the TASR newswire. “Compared with 2011 it is obvious that VAT should bring by €300 million less than the finance minister indicated.”

Moravčík added that VAT forecast for 2015 indicates that big fish in the VAT mafia would continue swimming without any punishment.

The Finance Ministry wants to continue to fight against tax avoidance and evasion also this year when the cooperation should expand to neighbouring countries and other measures, for example so-called tax rating, are in the pipeline. Kažimír added that some measures introduced under the label of boosting effectiveness of tax collection may be cancelled this year as meanwhile some more effective measures were adopted. But he did not elaborate, the SITA newswire wrote.

The new tool, tax rating or the index of tax reliability to be launched this year, shall – together with repression and the National Receipt Lottery – help cleanup the system of taxpaying.

“We want to objectively measure the taxpayers’ behaviour,” Kažimír said on In Politics. “Those who behave the way they are supposed to – and this means most taxpayers – should have allowances from the system of paying taxes.”

He specified that tax administration should be more polite towards them, not bothering them with excessive red tape, and even offer financial relief.

Fico wants to use extra tax revenues for coverage of his second social package while he did not specify yet its price as well as measures to be included in it. This package is scheduled to be approved in May or June, Fico told a press conference on February 13.

He refused to define its individual measures until the volume of finances that his cabinet would have is known.

So far Fico has indicated a plan to support local tourism via holiday vouchers, while Kažimír wants reduction of payroll taxes in order to see earnings of low and medium earners increase. As of the begging of 2015 there is in place a payroll tax reform increasing net earnings of 627,000 workers. Another possibility is to reduce the corporate tax, which is now 22 percent.

“My private survey and communication with Slovak business [sector] prefers for now reduction of wages costs as we did ... in January,” Kažimír said during a discussion show on public broadcaster STV.

Trade unions also would like to see other measures in this direction.

“When the second package would be adopted we will try to persuade the government about the need to increase the minimum wage to €410-415,” Emil Machyna, the head of the trade unions KOVO said as cited by the Pravda daily. This means that people earning the minimum wage would earn net around €350 during the election year of 2016.

Vladimír Sirotka, president of the Slovak Association of Small Businesses (SAMP) said when commenting the adoption of the second package for STV1 that “this will help those social groups, but it is a kind of deformation because we actually heal the patient but we do not remove the reasons they are sick.”

The first 15-measure package adopted in July 2014 with the price tag of €250 million contains, among other items, free trains for students and pensioners and 50-percent discounts for train commuters, increase of the minimum wage by €28 to €380, and reduction of payroll taxes for low and medium earners.