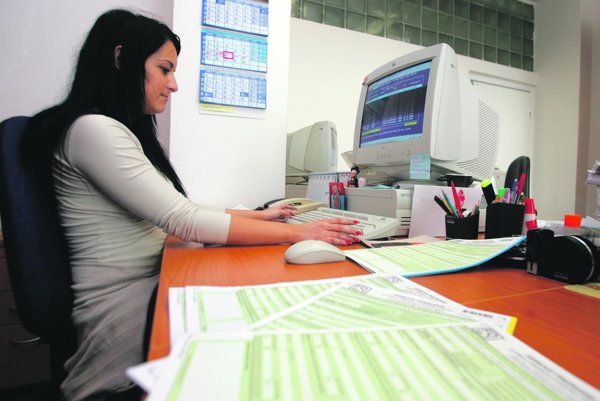 VAT and income taxes in Slovakia

IN THE latest report on taxes from the World Bank Group and audit firm PwC, Slovakia has been ranked 100th out of the 189 countries assessed. While the result is a small improvement on previous years, it also highlights the many challenges that remain.

“The main reasons behind the placement are the high number of payments and related time consumption and high tax burden on work,” Finance Ministry spokeswoman Alexandra Gogová told The Slovak Spectator.

According to the Finance Ministry, as well as other experts, lowering corporate tax and introducing mandatory electronic tax forms for all enterprises could help.

In the latest edition of the Paying Taxes 2015 study, published in November 2014, Slovakia was ranked 100th, with a 48.6-percent total tax rate, and an average of 207 hours needed to comply with 20 different payments.

Slovakia improved its ranking by two positions, compared to the previous year, Christiana Segurová, a partner at PwC in Slovakia, told The Slovak Spectator. She pointed out that the study was based on the legislation valid as of December 31, 2013.

“It is also necessary to be aware of the fact that our placement in the ranking is affected not only by the development of and changes in our tax system, but also by the changes in the tax systems of the other countries,” said Segurová.

“Considering the parameters of other countries with a better ranking than Slovakia, it is mainly lower taxation on labour that could help improve our total ‘tax grade’,” said Segurová. “I am convinced that our position will be improved by introducing electronic communication with tax offices and also by simplifying our tax system, including the structure of tax rates.”

She expects that the position of Slovakia will be significantly improved following the introduction of compulsory electronic filing of VAT returns on January 1, 2014, as the reported number of tax payments will drop substantially. However, this effect will only be reflected in Slovakia’s ranking next year, i.e. in Paying Taxes 2016.

“Taxes are the source of financial means that are necessary to maintain social programmes and to support economic growth,” said Augusto Lopez-Clarosa, director of global indicators and analysis at the World Bank, adding that political representatives must find the right balance between increasing tax income and at the same time encouraging entrepreneurial activities.

According to Andrew Packman, leader for tax transparency at PwC, tax reform will remain an important topic for governments around the world. They will still have to deal with the OECD’s proposals on modernisation of tax systems despite the overall improvement in the Paying Taxes survey, he said.

The Paying Taxes study by the World Bank and PwC takes into account three factors: the total tax rate, the hours it takes an average company to fulfil its tax obligations and the number of payments made by an average company.

Compared to the 2014 edition, the average time it takes a medium-sized company to pay its taxes decreased by four hours and the average time needed to fulfil tax form duties decreased by 1.5 hours. A huge contribution comes from the utilisation of electronic tax payments and tax forms. Out of the 379 tax reforms covered by Paying Taxes worldwide since 2004, 105 referred to electronic tax forms.

Róbert Kičina of the Business Alliance of Slovakia (PAS) points out that, even though Slovakia’s neighbouring countries from the Visegrad Four are not far from Slovakia, this country remains in the unflattering second half of the ranking. He believes that there is a lot of room for improvement. Croatia ranks 36th, Estonia 28th and Latvia 24th, all of them post-communist countries that have managed to move up in the ranking, he notes.

The Czech Republic improved its rating by three places this year. The time needed to comply remained the same, but it has fallen by 517 hours to 413 over the last five years, according to the PwC findings.

David Borkovec, an analyst at PwC Czech Republic, said that the country has not seen any significant changes in its tax system over recent years. The improvement in its rating is the result of changes in other economies. Still, the Czech tax system remains one of the most complicated in the EU.

Kičina also sees the Slovak income and payroll tax system as complicated, as it has a number of parameters, exceptions and special schemes and businesses struggle to orient themselves. Moreover, offices administering this agenda are not interconnected and the need to collect information separately generates an additional administrative burden.

Radovan Ďurana from the Institute for Economic and Social Studies (INESS) points out that a Slovak company had to execute 20 payments a year, which is the fourth highest in the eurozone. He blames the low placement of Slovakia in the ranking on the significant increase of the corporate tax rate, introduced by the government in 2013. It was increased from 19 percent to 23 percent in 2013 and reduced to 22 percent the following year.

According to Segurová, the worsening in the total tax rate of Slovakia from 42.7 percent to 48.6 percent reflects changes in the tax legislation adopted as part of the consolidation of the public finances and thus benefited the state budget and not taxpayers.

Kičina, indicates that the increase in the rate may be a consequence of the increase in corporate tax in 2013 in combination with an increased payroll tax burden on higher earners and employees working on fixed-term contracts.

“Tightening tax regulations from the end of 2014 moreover creates preconditions for another worsening of that parameter, which means that it is possible to expect another increase, in spite of the reduction of the corporate tax rate,” said Kičina.

“[In Slovakia] we still do not obey the rule that the public administration should not demand the same information from an entrepreneur twice,” Ďurana said.