FORMER communist-time leader Vasil Biľak who died less than a year ago had a commemorative monument revealed in his home village, Krajné Bystré, on February 21. During the following night, it was painted over with the word Sviňa / Pig. Police are investigating the act. 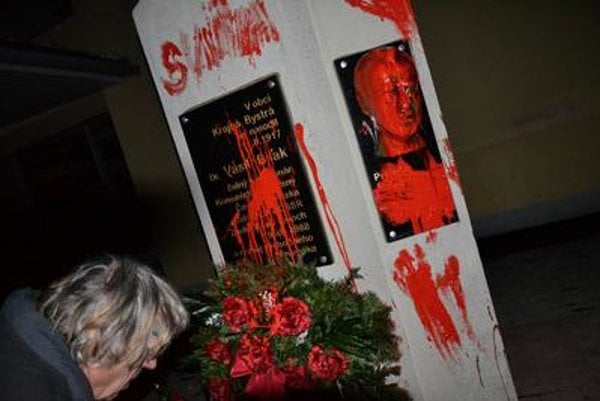 Former secretary of the communist party of (then) Czechoslovakia, Vasil Biľak, was hailed by Krajné Bystré natives as a man who did a lot for the municipality when in power.

“In the name of the Nation’s Memory Institute (ÚPN), I express a strong protest against Slovakia starting to build monuments for unpunished members and officials of criminal organisations, as evidently were the communist parties of Bohemia and Slovakia, 25 years after the end of the communist totalitarian regime,” chairman of the Board of  ÚPN, Ondrej Krajňák, wrote as quoted by the SITA newswire.

Krajňák added that he does not deny Biľak’s merits for his home village, but he still perceives the effort with disappointment – as Biľak is mostly considered the person responsible for the invasion of armies of the Warsaw Pact in August 1968 and the ensuing occupation of former Czechoslovakia. “I see it as a taunt for victims of the communist regime, and a provocation for all citizens with democratic views,” Krajňák said.

The commemorative plaque outraged and shocked also artists Peter Kalmus and Ľuboš Lorenz – who admitted for the Sme daily it was them who sprayed it. Police are investigating this event.

Slovaks seem to like building and making monuments commemorating doubtful personalities of their history: in 2011, a bust of Ferdinand Ďurčanský, a Slovak wartime-state politician, was placed on a square in the town of Rajec in northern Slovakia. Ďurčanský had been sentenced to death for high treason and collaboration with Nazis after World War II.

Unlike him, Biľak was never tried for his deeds during the communist regime and died peacefully in February 2014 as a pensioner, aged 97.