SLOVAK  President Andrej Kiska went to Ukraine at the end of last week, to commemorate the first anniversary of anti-government protests on Maidan (Independence Square). 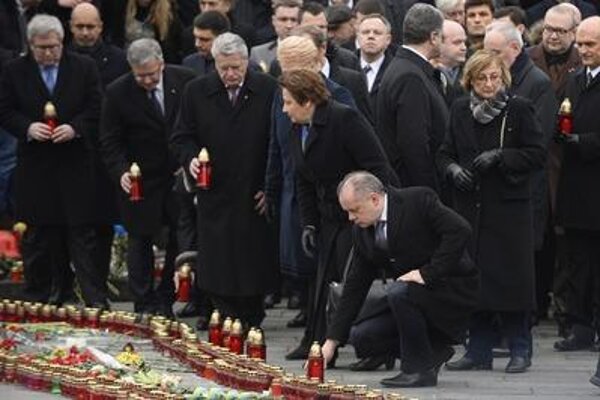 “I have no doubts about the involvement of Russia in the military conflict in eastern Ukraine,” Kiska said during his working visit to Kiev on February 22. “I have no doubts about this, and I believe that anyone with adequate information who hasn’t succumbed to Russian propaganda cannot have any doubts, either,” the Slovak president said for the TASR newswire about Moscow’s interference in the conflict in Ukraine.

It is the military conflict in eastern regions that has caused the slow pace of reforms, said Kiska, who also welcomed the fact that former Slovak finance minister Ivan Mikloš (2002-06, 2010-12) will assume the role of advisor to the Ukrainian Finance Ministry on economic reforms.

Evidence of Russian aggression in the form of captured Russian military equipment displayed on Mykhailivska Square have made Kiska indignant that such a small country needs to fend off its large neighbour.

“Without the “help” of this enormous country [Russia], the conflict would have been resolved a long time ago,” said Kiska. Burnt cars, a tank, a Grad rocket system, infantry vehicles and a spy drone that the Ukrainian army doesn't have in its arsenal were displayed on the square.

The February 22 March of Dignity commemorated the more than one hundred victims of last year’s demonstrations and saw the lighting of candles by heads of foreign delegations. The names of the victims and their portraits were displayed on a large screen.

“The Maidan protest was a public expression that Ukraine wants to walk towards democracy,” Kiska said. “It doesn't want oligarchs or bribes but rather to become part of our democratic Europe. The people on Maidan were willing to sacrifice their lives in order to make life in Ukraine better and more democratic.”

“Everything must be done for the Minsk Treaty to be implemented,” he added, who also discussed with Ukrainian President Petro Poroshenko the need to complete inevitable reforms in the latter’s country. Kiska revealed that Poroshenko has great doubt about the agreement, striving to bring the situation in Ukraine back to normal and peaceful operation, will be fulfilled in reality. Poroshenko also mentioned the reform process that has already started.

Slovak Foreign Minister Miroslav Lajčák did not attend the Ukrainian event, as he was on an official visit to the Philippines, while Slovak PM Robert Fico stayed home, appearing on the public RTVS TV channel’s political debate, the Sme daily wrote.