DESPITE some positive steps, Slovakia still struggles to stop Roma discrimination or take action against police who engage in violence, according to Amnesty International Slovensko’s (AIS) report evaluating the state of human rights in 2014. 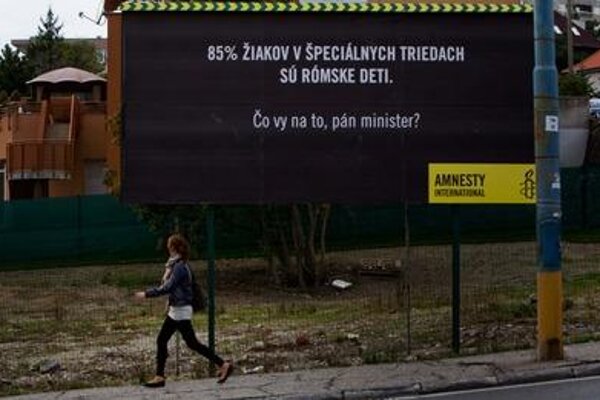 The discrimination of Roma was highlighted among the main problems the Slovak society faces. The global annual report has ranked Slovakia along with the Czech Republic as countries in which discrimination in educating Roma children continues, Lenka Machlicová of AIS told the press on February 25.

“The topic of education and equal approach to it has not become the priority of the government,” Machlicová told The Slovak Spectator, “and there is still the problem of excessive number of Roma children in special education schools or the existence of classrooms with Roma pupils only.”

The report also singled out the 2014 amendment to the constitution defining marriage as a violation of the LGBTI rights.

Machlicová pointed to the European Commission’s administrative proceeding against the Czech Republic initiated in September 2014 over its continued failure to implement a ruling of the European Court of Human Rights concerning the complete segregation or the excessive number of Roma children in special schools for challenged students.

“The same state of affairs is seen in Slovakia, but a breaking point such as that witnessed in the Czech Republic hasn’t occurred,” she said, as quoted by the TASR newswire, adding that some progress has taken place at the local level in the context of individual cases.

In this respect, the AIS reminded of the last year’s findings of Ombudswoman Jana Dubovcová whose report suggested that Roma children are being over-diagnosed and are thus stripped of any real opportunities early in life as they fall further and further behind others of the same age while studying in schools meant for children with mental disabilities.

When it comes to segregation, the AIS mentioned building the so-called container schools whose aim allegedly was to improve the access of Roma to education. Most of the 15 schools which should have been built during 2014, however, were to be located in Roma settlements, according to the AIS report. It added that also Government’s Proxy for Roma Communities Peter Pollák admitted that such schools would only deepen segregation.

However, Education Ministry spokeswoman Beáta Dupaľová Ksenzsighová told the public-service broadcaster RTVS that the container schools have been built only in municipalities where there already is a normal school.

“We were expanding the capacities, which means that we do not build new container schools in settlements where they would cause segregation,” she said.

In order to solve this situation, the government has to admit it is a problem and to initiate the systematic changes, Machlicová told The Slovak Spectator. It should, for example, define what the segregation is, create the de-segregation plan and reform inspection authorities.

On the other hand, the AIS welcomed the efforts to legalise Roma settlements, though it pointed in the report that the new draft Construction Act lacks mechanisms to protect people from forced eviction.

Another problematic area was the cases of police violence in Košice in 2009 and at Budulovská settlement in Moldava nad Bodvou in 2013. Regarding the former incident, the AIS pointed out that by the end of the year the district court has not passed any decision in the case of police officers who were accused of bad treatment of six Roma boys at the police station in Košice. One of the police officers who was released even got his job back in March 2014.

In the case of Moldava nad Bodvou, the report states that though the Interior Ministry launched an investigation in January 2014, the previous complaints of the affected inhabitants have been dismissed. Dubovcová has also criticised the raid, citing the use of inappropriate force, humiliating treatment and arbitrary home search.

Another step backwards in the human rights agenda was the adoption of the constitutional amendment enshrining marriage as a unique union between a man and a woman which, according to Machlicová, “is at odds with the international law and the law of the European Union”.

The AIS also reminded of the initiative of the Alliance for Family which collected more than 400,000 signatures for a petition it submitted to President Andrej Kiska. It sought the referendum on the protection of the family, seeking the answers to four questions: whether to limit use of the word “marriage” only when referring to the union of a man and a woman; whether to ban adoption for same-sex couples; whether to allow parents to opt their children out of school classes dealing with sex education or euthanasia; and whether they agree that no other cohabitation of persons other than marriage should be granted particular protection, rights and duties that law presently grants to marriages and to spouses. The Constitutional Court ruled the last question is unconstitutional.

According to Machlicová, Slovakia should continue in trend it initiated in the beginning of 2014 when it established the Committee for LGBTI Community or when it defined the crimes based on sexual orientation within the amendment to the Criminal Code.

“We will welcome if the government continues in fighting the discrimination and in discussion about rights of LGBTI people,” Machlicová said, adding that the room for discussion opened after the date for referendum was set last November.

Slovakia has also made some good human rights improvements. It, for example, accepted more Guantanamo prisoners.

“With such gesture the government made it helps to end the existence of the detention camp where still more than 140 men remain,” Machlicová said.

It also praised the government’s approach towards an action plan concerning cluster munitions and the global Arms Trade Treaty which will improve the regulation of weapons trade to countries where they may be used to violate human rights, Machlicová said.

The AIS report however slammed the return of individuals who are threatened with torture and other forms of bad treatment to their home countries.