THERE are several unofficial paramilitary groups running military trainings with non-lethal guns in Slovak forests and Martin Keprta, who used to take part in such exercises, now fights for pro-Russian separatists in Ukraine. 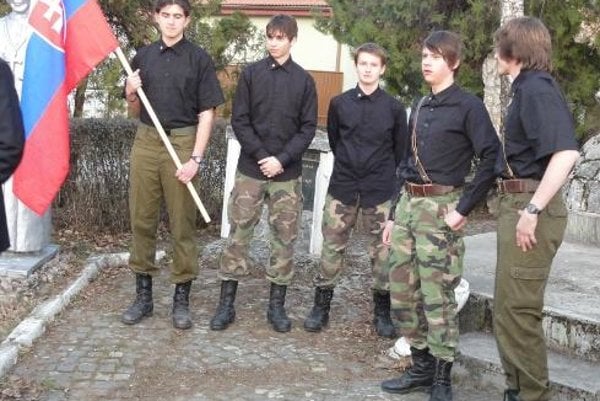 “This is not only confrontation related to Donbas [region in Ukraine] but this is a war between Russia and NATO,” said Keprta in video of broadcaster Channel One Russia, published by Denník N daily. “This means that today I fight de facto for interests of my own country.”

There are at least five more Slovaks fighting on the side of pro-Russian separatists, according to Radovan Bránik, the founder of Modrý anjel (Blue Angel) crisis intervention team.

He said that Keprta was in past member of Slovenskí branci (Slovak Levies) group focused on fitness and military training. The group defines themselves as apolitical and patriotic militia helping people during peace and defending their country during war, according to its webpage.

Slovak Police have not noticed any violation of law by Slovak Levies. Furthermore, not every Slovak fighting in Ukraine comes from this group. Authorities know about several Slovaks fighting in Ukraine on both sides and their number remains in the single digits, Interior Ministry spokesman Ivan Netík told The Slovak Spectator.

Members of such groups are often supporters of various extremist movements both far-right and far-left and they pose a security risk for Slovakia, according to Central European Policy Institute (CEPI) Senior Fellow Jaroslav Naď.

“ We are speaking of paramilitary non-registered groups which are conducting relatively sophisticated training and their members are mostly of the same extremist political opinions,”   Naď told the Slovak Spectator. “ When such groups get weapons they could be really dangerous.”

The Slovak Information Service (SIS), the country’ s main intelligence agency refused to say exact number of such groups operate in Slovakia or whether they pose a threat to the country.

Slovak Levies run military trainings to prepare members for possible attack against the country. At the same time its members help during natural disasters, do hiking tours and help with environmental projects, according to its webpage.

The group has more than 100 members organised in 16 units. They do not promote Nazism and distance themselves from Keprta who left group after personal disagreements with members according to group’s leader Peter Švrček, Denník N reported.

“ He [Keprta] has not been member of the group for three quarters of the year,”  Švrček told Denník N. “ He left because of opinion [matters]. He handed over the insignia and went away.”

The report on extremism prepared by Interior Ministry in 2012 provides rather different view. Even as Slovak Levies tried to present themselves as ideologically neutral group without any connections to extremism some statements by their representatives indicated otherwise.

“ There were other motives behind rhetoric about patriotism and country defence which displayed their connections with extremism and extremist subjects,”  reads the report.

It is non-registered group of young people who claim to be patriots and love their country trying to live in rational way. “ We are not suffering an equality or tolerance complex, we are driven by natural selection,”  reads their group’ s profile in social network.

One of their videos show six young men hit by pepper spray and then ordered to do 50 push-ups. In another one member of the group shows his skill with a flamethrower.

The daiy reported that the group members also supported Banská Bystrica Regional Governor Marian Kotleba during his inauguration. Kotleba has a history of racist statements and acts. He founded and led the Slovenská Pospolitosť (Slovak Togetherness) far-right political party, which was later banned by the Interior Ministry and has existed only as a civic organisation since December 2013.

However, claiming that Slovak Levies are extremist group would be too simplistic. In recent past Švrček cut connections with certain people or whole units which openly promoted extremists ideas. Moreover, its members are of various nationalities, Daniel Milo, the secretary of committee for extremism prevention at Interior Ministry said in interview with Sme.

“ We wouldn’t find a common neo-Nazi with symbols and admiration of Third Reich there,” Milo told Sme. “They [Levies] present some sort of cross point for young men looking for worldview, group of similarly thinking persons and adrenalin during their adolescence and for a short time after it.”

On the other hand, they can launch radicalisation which can result in participation in foreign military conflict as it happens with Keprta, Milo added.

There is no mandatory military service in Slovakia and country lacks system of active militia. Therefore it is hard for people who are fan of military to practice their skills and they are looking for alternatives, according to Naď.

“It’s not possible to ban people from organising in groups, or conducting training,” Naď said. “What is important that they will act in line with the law.”