THE CONFLICT in Ukraine was one of the topics Slovak President Andrej Kiska discussed during a meeting with NATO Secretary General Jens Stoltenberg in Brussels on March 3. 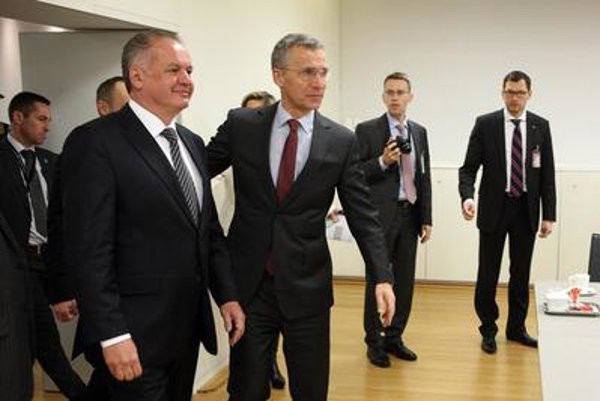 They agreed that the truce between pro-Russian separatists and the Ukrainian army exists but is fragile.

“The responsibility of Russia to keep it [the truce] endures,” Kiska said, as quoted by the SITA newswire. “There is no need to dramatise the situation, but the security threats in Europe have changed and this puts challenges before us which we could not imagine a few years ago.”

With respect to the conflict in Ukraine Kiska also opened the topic of “information war”.

“The modern weapon systems are not enough for us, we have to know how to prevent the organised spreading of disinformation,” the president continued, as quoted by SITA. “I am not talking about different opinions which are natural aspects of a democratic and free society. I am talking about deliberate work with facts, open lies. In context of the crisis in Ukraine we encounter this in as such an extent as never before.”

Kiska and Stoltenberg also discussed Slovakia’s position in NATO. The Slovak president stressed that regarding security, the country’s membership is the absolute priority.

“We are a small country,” Kiska said, as quoted by the TASR newswire. “We are part of big ensemble where we get a lot, but we also have to give something. The secretary general made a good point when he said that NATO is not all for one, but one for all.”

The president also reminded of his promise from Wales that the budget of defence will be growing.

“Today I can say that the process of modernisation of the Slovak army has begun,” Kiska said, as quoted by SITA. “We have the ambition to gradually get rid of Russian military technology.”

The base for the modernisation will be new radar systems and helicopters, he added, as reported by TASR.