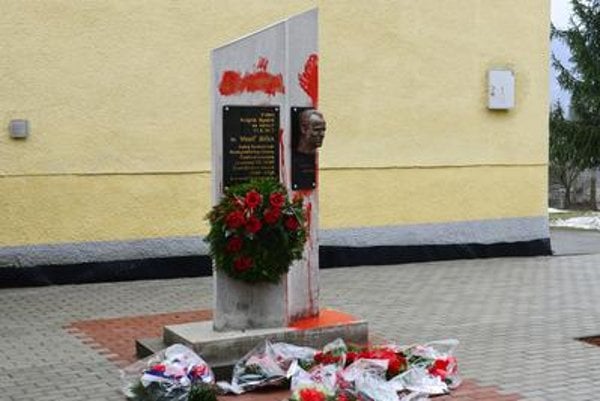 JUST one year after the death of communist-era leader Vasil Biľak the members of the Communist Party of Slovakia (KSS) raised a memorial in his native village in eastern Slovakia in late February. Given Biľak’s history of inviting the Warsaw Pact armies to invade Czechoslovakia back in 1968, this struck many as strange, and overnight March 1-2 thieves stole the bust that was part of the memorial. Days earlier vandals targeted it, splashing it with red paint.

Biľak’s memorial is not the only monument dedicated to a controversial historical personality erected in Slovakia. There are several sculptures, busts or memorial plaques to both former communist leaders and representatives of the Nazi-allied Slovak wartime state. Experts say they result from the fact that Slovaks still have not dealt with the dark chapters of country’s history.

Every state has a group of people which openly admires controversial personalities, but not everywhere they dare building memorials to them, Adam Hudek of the Institute of History of the Slovak Academy of Sciences told The Slovak Spectator.

“In Slovakia however the open presentation of sympathies to the [Nazi-allied] Slovak state and communist regime are still not considered a social taboo,” Hudek said.

The real process of coping with the past and a historical consensus that rejects non-democratic regimes and their representatives is missing, he added.

There is no problem with placing memorials to people who somehow contributed to the development of the society and are “worth of being followed” in public spaces, said Bohunka Koklesová, vice-rector of the University of Fine Arts and Design in Bratislava.

“It should certainly not be the representatives of criminal regimes who contributed to forming the system which eliminated its own people,” she told The Slovak Spectator.

The memorial to Biľak in his home village of Krajná Bystrá (Prešov Region) was initiated by the KSS. Locals praised his deeds which contributed to the development of the village. They even granted him honorary citizenship.

In media reports, the inhabitants of the village were not critical of Biľak, despite the fact he initiated the 1968 occupation of Czechoslovakia.

According to sociologist Silvia Miháliková of the Comenius University’s Faculty of Political Science and European Studies, collective historical and political memory is always selective and that “it takes some time until some interpretation schemes become generally accepted”.

There are still some people who are nostalgic or who idealise the previous regime, which results in their positive perception of its representatives, she told The Slovak Spectator, adding that it will take some time to deal with the inheritance of the communist regime which lasted here for nearly half-a-century.

One of the factors why Slovaks praise the representatives of the previous regime is also the sudden change from socialism to market economy, said Ondrej Krajňák, head of the Nation’s Memory Institute (ÚPN) board.

“The transition to democracy took place without punishing those responsible for crimes against humanity, or even excluding them from public life,” Krajňák told The Slovak Spectator. “On the contrary, most people were not prepared for the changes and they could not benefit from them. Disappointed by the development they lamented about their previous certainties.”

František Bednár of the World Association of Former Czechoslovak Political Prisoners agrees that the crimes of communism have not been punished and many of its representatives, unlike representatives of the Nazi regime, “peacefully enjoy their retirement and write memoirs”.

Another factor is the weak knowledge of history and the absence of public discussion which is usually limited only to small groups of activists, said Hudek. He added that since there have been several waves of removing the old memorials and substituting them with the new ones “people have got accustomed and respond apathetically”.

Koklesová considers it is not possible that part of people who considered their lives to be good during the previous regime would not think about people who were then persecuted. She compared the situation to the statement of former Archbishop Ján Sokol that the life in the Nazi-allied Slovak state was good.

“It is morally unacceptable,” Koklesová said. “Somebody cannot feel good at the expense of their persecuted fellow citizens who are part of us and belong to us.”

Biľak is however not the only controversial historical person who has a memorial in Slovakia. There is a statue of communist-era official Marek Čulen, co-founder of the KSS and one of the people closely connected to collectivisation of property, standing in front of the Government Office in Bratislava.

President of the Nazi-allied Slovak state Jozef Tiso has a memorial plaque situated in Bytča on the house where he was born, while another wartime official Ferdinand Ďurčanský has a bust in his hometown Rajec.

Convicted WWII minister gets a bust

In Košice there is a memorial dedicated to János Esterházy who served as a deputy in Czechoslovak parliament and also in the parliament during the Slovak state. After attaching southern Slovakia to Hungary in 1938, which came as a result of the Munich Agreement, he invited Hungarian regent Miklós Horthy to Košice in person, the Denník N daily wrote.

Though the Culture Ministry disagrees with raising memorials dedicated to people like Biľak, it reminded that it has to give its consent “only to the memorial in conservation area, or in the monument, on the grounds of protection and preservation of monuments’ fund”, the SITA newswire wrote. Municipalities are otherwise in charge of the process.

These memorials stand despite the provisions of the Slovak Criminal Code which bans the promotion of people or movements which lead to suppression of the basic rights and freedoms, the Hospodárske Noviny daily wrote.

Trends for the future

Krajňák believes that the historians and experts should be invited to decide on who should receive memorials. He pointed at the need to secure the impartiality of evaluating the historical personality.

Hudek says that in bigger towns there are committees which deal with the proposals to erect a memorial.

“The problem is that in most of the cases they consider only aesthetic criteria and not the content,” he explained.

Though it would be useful to invite also the experts, Hudek warned that it does not solve all problems. In the past there was no problem to find historians who defended Ďurčanský’s bust, he added.

Experts agree that there will be some attempts to raise memorials dedicated to controversial personalities in the future.

“The historic reminiscences and attempts for alternative perception of history and its representatives is not limited only to a certain generational group,” Miháliková said. “We cannot reckon that the generational change will automatically mean that we will break free from this obsession with history in public spaces.”

One way to prevent the promotion of totalitarian regimes’ representatives is legislative changes. These are in hands of politicians, but they would have to show effort to “deal with the symbolic part of the politics, not only its material benefits”, she added.

According to Krajňák, the education system and media also have roles to play. As long as there are teachers who are not clear about these issues or media reports contributing to the promotion of extremist expression the number of similar memorials will increase, he explained.

“Slovak society has not settled the traumas of the past, and until we talk openly about these times and right the wrongs it will be a very hard and particularly long process,” Koklesová said.