Show is fit for synagogue

It came about as an accident more than anything else. “Working on a another project, we found these objects on a sludge field of the sugar refinery Sereď in 2013,” Bohuš Kubinský, one of the creators of the Front Line Deposit exhibition told The Slovak Spectator. 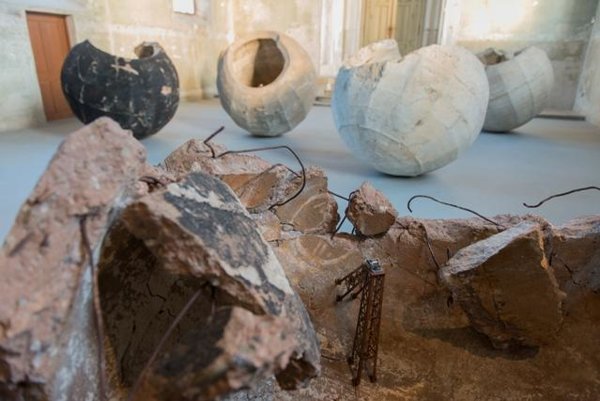 “First, we though they were some industrial objects used to refining sugar but later one of local seniors recalled that they were used as one-man bunkers during the World War II.”

The Front Line Deposit exhibition is harnessing those strange balls as part of a show at a synagogue in Šamorín, a town 30 kilometres out of Bratislava through March 30. The exhibition catalogue is available in both English and Slovak.

Kubinský said the artists originally asked for just two of the large orbs, but in the end brought home 11 of them. Originally meant for the Venice Biennale, nine of the so-called Kugel-bunkers went to the Dox Centre of Contemporary Art in Prague instead.

Later, in November 2014, seven of them were moved to the At Home Gallery in former synagogue in the town of Šamorín. While in Prague, the bunkers were exhibited with a trench bulwark of the World War I type, symbolising a bridge in time between the two wars and all the way to current military conflicts. Now, in Šamorín they are installed alone, filling the entire ground space of the sanctuary. 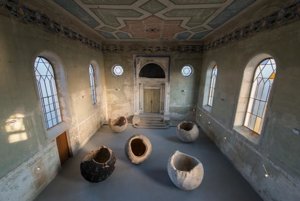 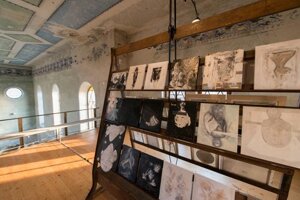 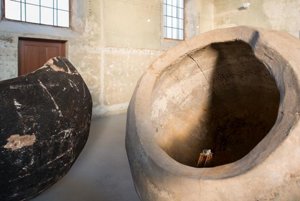 “We tried to explore the phenomenon of these round bunkers that can hardly contain one person, but found more speculation and debate than fact,” Kubinský and his wife Monika said, adding that they visited museums and experts but only found a single, smaller Kugel bunker in the Army Museum in Vienna.

Some of the bunkers, which resemble a womb-like safe haven, have been fitted by tiny hand-organs, or serinettes, playing different melodies which are themed around peace, war, family and related issues. The objects differ in colour, state of intactness, and placement.

Another part of the exhibition is placed in the upper space which used to be a gallery for women (unique for a synagogue, as women had even their separate entrance from the side). Here, the visual diaries of Monika Kubinská take the form of drawings and other artwork that both maps the preparation of the exhibition and expresses her feelings, ideas, impressions.

Installed in wooden shelves, or as she calls them “bookcases”, the artworks are divided into thematic series, from one reflecting concentrated female energy to the darkest ones impersonating the evil inherent in war.

Strangely, the man-made concrete orbs evoke rather positive emotions – perhaps because of the playful installation including music – and harmonise finely with the walls and the interior of the synagogue.

The exhibition is best visited by appointment with Mr. Csaba Kiss at the telephone number 0903/255681. It runs through March 30. For those who fail to make it to Šamorín, the Kubinskýs are in the midst of finding another place to exhibit these mysterious, though strangely decorative, remnants of war.