Kotleba may be stripped of power to administer EU funds

THE BANSKÁ Bystrica region and its governor might soon be subjected to an unprecedented step and become the only one of Slovakia’s eight regional governments stripped of its ability to administer funds from the European Union. 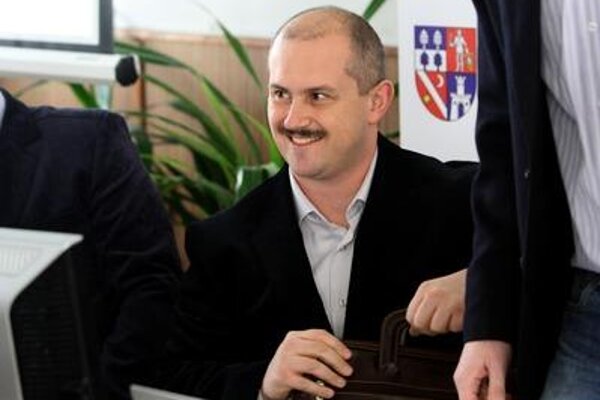 Prime Minister Robert Fico claims the idleness of the regional governor is forcing just such a solution.

Governor Marian Kotleba demonstrated his negative attitude towards the European Union by ordering the EU flag to be removed from his office’s building upon his taking office. He has also paid little attention to EU funds, which represent a significant source of money for various infrastructure projects on the regional level, including construction and reconstruction of roads or schools.

The Banská Bystrica Self-governing Region (BBSK) has been lagging behind in drawing the EU resources. Prime Minister Robert Fico spoke about that after his cabinet convened for an away-from-home session in Banská Bystrica at the end of February, and pointed the accusing finger at Kotleba, the regional governor as of late 2013.

Due to his “absolute idleness” the city of Banská Bystrica, rather than regional authorities would instead be empowered to tap money from Brussels, according to Fico.

“We have to consider it seriously, as it’s an unprecedented move that may cause significant tension,” Fico said in Banská Bystrica on February 25. “Nevertheless, we don’t see any reason why people in the city of Banská Bystrica and in the region should suffer due to the fact that somebody has been elected experimentally as governor.”

The region has lost several millions of euros already and is likely to lose an additional €800,000 that it could have drawn from the funds administered by the Agriculture Ministry, Fico said, citing the BBSK regional councillors and his government ministers as the source of this information.

The ministry confirmed for The Slovak Spectator that they have terminated eight contracts concerning the development of the regional strategies for drawing funds from the Regional Operational Programme with BBSK, worth cumulatively over €718,000, of which over €610,000 was to be paid from the EU and €71,000 from the state budget. The BBSK was supposed to contribute some €35,000.

“The proposed strategies should have served as basis for the effective drawing of funds from operational programmes for the new period for the whole Banská Bystrica region,” the ministry’s spokesman Peter Hajnala said.

He also noted that they haven’t noted such lack of interest in drawing EU funds on the part of regional governments previously, only towards the end of the programming period at the turn of 2014-2015.

The BBSK responded to Fico’s accusations through its spokesman Vladimír Gürtler who labelled the prime minister’s statements an “inadequate attack on the legitimately elected” governor Kotleba. Gürtler called the intention to strip the BBSK of its competencies unacceptable and discriminatory.

In the video statement Gürtler admitted BBSK lost €800,000, but blamed the previous governor, Smer’s Vladimír Maňka whose administration violated the law in the preparation of the project documentation.

Hajnala also mentioned two other contracts that eventually weren’t sealed between the ministry and the BBSK concerning projects of infrastructure of social services. The BBSK could have been granted more than €4.2 million of the overall €4.5 million price tag from the Regional Operational Programme. The ministry cited as a reason the fact that the BBSK did not respect their call to complete the documentation for the projects, “as well as the apparent lack of cooperation in the creation of the draft contract on granting the financial contribution”, Hajnala said for The Slovak Spectator.

The project concerned the repairs of homes for disabled persons, the controversy around which was reported in 2014. This case dates back to the end of October 2014, the deadline for drawing the €4.5 million approved from the EU funds for the two projects. Kotleba then insisted that he could not sign the contracts to launch the two projects because the regional council did not approve money for the 5-percent co-financing of the costs. The councillors, however, claimed that the governor could proceed with the contracts and rely on the council to approve the money after the fact.

The use of EU funds towards repairs of a home for disabled children was nixed by regional councillors representing the Smer party, BBSK spokesman Gürtler insisted in his recent video statement, claiming that Kotleba was ready to sign the contract and draw EU funds.

EU to have a say

Experts on regional administration and EU funds differ in their opinion about the likelihood that the power to tap EU funds would transfer from the region to the city.

Bratislava regional governor Pavol Frešo, however, maintains that lagging behind in drawing the funds is not a reason to strip the regions of their competencies, because it would violate the independence of regional administration as defined by the European Charter of Local Self-Government.

It is however not solely up to the national administration to make changes in the system of drawing at this point.

The self-governing regions act as the intermediary bodies of the Regional Operational Fund in the 2007-2013 programme period and the Integrated Regional Operational Programme in the current 2014-2020 period, Andrej Králik of the Representation of the European Commission in Slovakia noted, adding that in practice this means that the control body of these operational programmes – the Agriculture Ministry – delegated certain competencies in using these funds to the regional governments.

“A change of the intermediary body would mean a revision of the programmes,” Králik told The Slovak Spectator. “This revision would have to be approved by the monitoring committee of every programme, as well as by the EC.”

If the Banská Bystrica region should no longer act as the intermediary body for the Regional Operation Programme, the regional authorities would still be eligible to apply for grants from the funds, but they would no longer administer the grant applications from other subjects, such as the municipalities in the region.

The ministry, however, has not confirmed whether it would promote this solution and pass the competencies on to the city of Banská Bystrica, as suggested by Fico.

Meanwhile, Kotleba also faces accusations of nepotism after it turned out that his wife, Frederika Kotlebová, was hired by the Banská Bystrica Regional Administration of Roads (BBRSC) as an official for reporting anti-social activities. BBSK owns 100 percent of shares in the road administration company.

When the hiring of Kotlebová was reported as a conflict of interest in the media, BBSK spokesman Gürtler claimed Kotlebová was hired on purpose, to display the problematic parts of the new law, which is in effect since January 1, 2015, and requires every company with more than 50 employees to especially designate someone to be the point person in managing the agenda in terms of eliminating anti-social activities.

If a person with an unknown name had been hired, the media would not have taken interest in the new law, which shows signs of “supporting extortion”, the spokesman said. He added that Kotleba’s wife is working for a monthly gross salary of €576.

“This isn’t about Mrs. Kotlebová but rather about the existing law,” said Gürtler, as quoted by TASR. “We hired the spouse of the governor in order to draw attention to the law.”