READING a good book while sipping a favourite tea or coffee is no longer an image associated only with home. 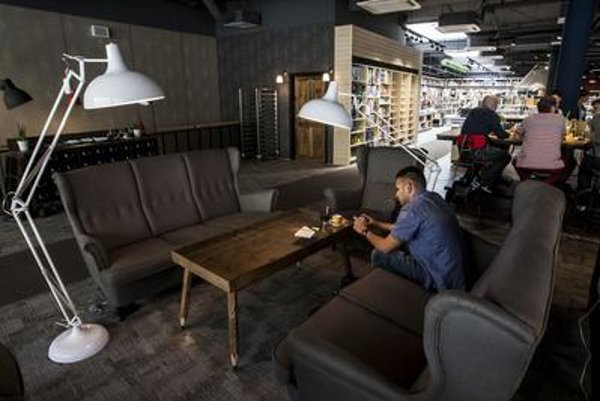 Visiting bookshops is not only about buying reading material any more. (Source: SME)
Font size:A-|A+0

Several bookshops in Slovakia have opened their own cafés, offering customers a homier atmosphere to decide whether they want to buy a book or just to meet with friends and also begun organising events to draw people in.

“It is kind of a staging post between bookshop and privacy of home,” Natália Kušnieriková of Artforum told The Slovak Spectator.

One of the bookshops which started offering coffee and cakes is Martinus which in late 2013 opened the network of cafés called Foxford in Bratislava and Košice. The author of the idea was Martin Bajaník who created the concept of Shtoor Home Made Café, with which the bookshop had cooperated before, the Trend economic weekly wrote.

“The aim was to evoke the positive emotions thanks to which people will feel comfortable here – the books deserve such emotion and space,” Martin Štrba, e-shop manager of Martinus, told The Slovak Spectator.

He added that they took the concept from abroad where various big as well as small networks of shops work in this way. While there the shop and café are more divided from one another, Martinus tried to unite them into one common space, Štrba explained.

The Gorila.sk bookshop joined forces with the Urban Space network in September 2013 and opened a mutual space in downtown Bratislava. The idea came from founder of the shop Ján Budaj, and was inspired by similar concepts in New York or London, Ján Laš of Beyond Media company which runs Gorila.sk told The Slovak Spectator.

Both Martinus and Gorila also run the accompanying specialised premises where they, alongside snacks and drink, offer books focusing on food and cooking.

Artforum opened a café on its premises in Bratislava in 2012. Both Kušnieriková and Kompaníková said it “fulfilled the natural need to spend more time in the bookshop than is needed to buy books”.

“[Customers] often take a book to the café and buy it after they delve into it,” Monika Kompaníková of Artforum said.

According to her, there have always been connections and needs to read and have a snack, or to read and discuss. Therefore, the co-existence of both spaces is natural, and not a result of the contemporary trend or the demands of the market.

The bookshops agree that responses to the new concept are positive.

The bookshops agree that the combination with cafés contributes to increase the number of visitors and the purchase of books. Many of the potential customers can take a book and read it while sipping a cup of coffee.

The bookshops however offer more activities to lure people. In Martinus it is, for example, meetings of authors and their readers and launching new books, while Gorila also offers various readings, concerts and discussions.

Artforum holds various exhibitions every three weeks, either from renowned photographers, students of art schools, friends or graphic studios. Moreover, there have been various workshops as well as presentations, debates and concerts for which the café offers “excellent facilities”, Kušnieriková said.

A slightly different format is offered by Koloman Kertész Bagala, a publisher of Slovak literature. The event called Čau o Piatej (See You at Five) takes place in his recently opened bookshop in Bratislava and focuses on presenting Slovak literature.

Bagala used to organise the autograph sessions at the Christmas Markets, introducing different authors every day. He continued with this concept also after opening the shop in December 2014.

“I originally thought it would be a one-off action and that the bookshop will then run as a commercial space,” Bagala told The Slovak Spectator. “But it turned out that people are very interested in talking about literature and listening to it.”

In January, he invited together 26 actors to read from books he published. The concept changed also in February when the winning pieces of the annual competition Poviedka (Short Story) held since 1996 were presented, Bagala said.

Except for this, he organises various events at which he accompanies the authors, either in Slovakia or abroad.

Bagala says that he does not plan to open any kind of café, stressing he is a publisher and wants to focus on literature and texts.

“I plan to continue in these cultural events and develop them so I have a programme for every day during a year,” he said.