THE CONFERENCE that took place in Košice during the weekend of March 6-7 declared its aim as finding a solution for the conflict in Ukraine. It culminated by adopting a joint declaration. 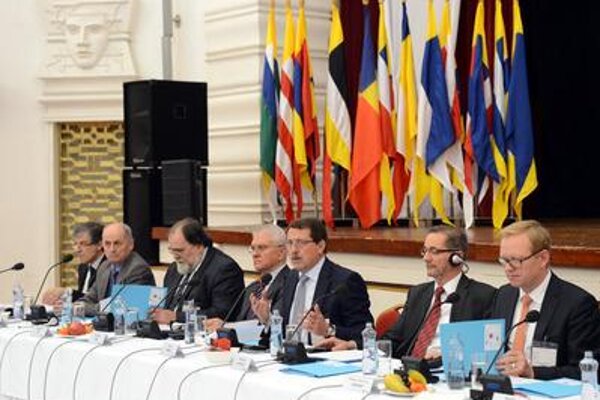 Former speaker of parliament Pavol Paška of Smer said at the opening of the conference that its only aim is to find a solution to solve the conflict in which people are suffering and return peace to Europe.

The conference was convened by Prime Minister Robert Fico based on the request of his friend, German socialist Matthias Platzeck, the Sme daily wrote. Platzeck has no influence in his German SPD party, as he openly supports Russia.

The conference, co-organised by Platzeck’s lobbyist forum has been closed for journalists.

Paška refused the claim that it is a meeting of Kremlin supporters; but the fact is that there are pro-Russian businesspeople and politicians in the leadership of the organising forums, German-Russian Forum and the German-Ukrainian Forum, as well as the the ASA institute which is connected with Smer.

Fico, who deemed the conference important and said that crucial politicians would attend it, failed to attend it himself. However, top foreign representatives of Social Democrats whom he had promised did not plan to go to Košice. And the politicians who arrived claimed they came as private personalities and not as party representatives, according to Sme.

The result of the two-day meeting is a memorandum calling for the unconditional end of military actions in the east of Ukraine. Rainer Lindner of the Board of the German-Ukrainian Forum told the SITA newswire that the peace call stemming from the conference is a call not just to the citizens of Ukraine and Russia, but also towards Germany and Slovakia, appealing to all sides of the conflict not to attack and to stick to the ceasefire and Minsk agreement.

Platzeck added that top representatives of Russia, Ukraine, Germany and Slovakia will be informed of the results, with more events and conferences to follow that could develop a constructive and effective dialogue. Platzek opined that a second, Way to Peace conference could take place in Košice by the end of summer or beginning autumn.